WTF Is This Weird Web-Tower Thing? We Asked Around. No One Knows

posted on Sep, 4 2013 @ 04:52 PM
link
my vote is either moth or spider but i'm leaning more toward moth. there are a couple of species that make a similar barrier. whatever it is it's super cool looking!

posted on Sep, 4 2013 @ 05:58 PM
link
I doubt they have found every single insect that calls the Peruvian Amazon their home, so I bet this possibly could be the handy work of one of them. Amazing though. ~$heopleNation

posted on Sep, 4 2013 @ 06:07 PM
link
I definitely think it's an egg sac in the middle, but I've never seen this kind of thing before.. and if it is an egg sac, for there to be four of them makes me think it can't be the same individual creating all of them.. I could understand if it were one individual that came up with a unique method.. ( we're not the only creative species )... but four of them..

Makes me think they're potentially on the verge of discovering a species of some insect we've not seen before..

The design of it is actually quite amazing.. an egg sac surrounded by a fence with equally placed "poles" and "wires" .. You can't deny that creatures big and small possess an intelligence to some level .. especially with design like that

Or .. since this is ATS ... it could be small alien life forms planting antenna stations for communication so they can colonize our planet

Originally posted by pasiphae
my vote is either moth or spider but i'm leaning more toward moth. there are a couple of species that make a similar barrier. whatever it is it's super cool looking!

I've never seen anything like this, what makes anything similar? I've seen barriers .. but none like this... and the center being tethered to the 'fence" which is also well designed, gives it protection from weather by dividing the forces along each of the lines...

I've really never seen anything like it... most experts seem to agree there

Originally posted by Cosmic4life
Hmmm looks like Nikola Tesla has re-incarnated as an Insect.

Hah .. hadn't thought of it .. Tesla is DETERMINED to build his RF delivery towers!


Originally posted by Cosmic4life
Hmmm looks like Nikola Tesla has re-incarnated as an Insect.

Hah .. hadn't thought of it .. Tesla is DETERMINED to build his RF delivery towers!

posted on Sep, 4 2013 @ 06:43 PM
link
They can count, it looks like they both have twenty eight spindles plus the center spindle. Maybe they are towers to pull in world wide web wireless signals. Too bad they only have a 28 baud unit
edit on 4-9-2013 by rickymouse because: (no reason given)

"Count the floodlights on the check-point"

posted on Sep, 4 2013 @ 07:08 PM
link
very interesting..im going with an unidentified insect..thousands of species yet to be discovered and classified probably in peru alone..i wonder if they have dug into one..the maypole thingy..lol

That's what we normally do to insects, and what EBE's do to us!


Looks like a fungi kinda structure. Did the article mention the size of the object?

posted on Sep, 4 2013 @ 09:04 PM
link
Ya it looks like insect sack spider moth take your pick, and some complicated protection around it complete with fence and tripwires to catch and possibly alert whatever build it. Though there little research into it would of gone faster if they opened the spire in the middle to see if its an egg sack or a moth caccon or whatever.

So ya! its either that or a insect prison of some sort, you know to keep the bad apples from the bug world in lockdown.

Or maybe bug communications tower of some sort, in some of the pics you can make out little what looks like spider like silk going from the tip of the spire on out to beyond the fence and out of picture, so maybe there communication amongst themselfs that way by vibrating strings to other little web towers or any nearby spider or moth or whatever built them, and the logical next thing is that there plotting to take over the world. :

Or at least take over there little slice of jungle, who knows since those little spider silk things would vibrate at the slightest pressure they could even be listening to whatever vibrations that are around the area so they could be listening towers of some sort, spiders can pick up on the slightest of vibrations even from the air, I think its how spiders mate, and zone in on pray or danger caught in there web or that are around there webs, there covered in hairs which are very sensitive to vibrations in some ways spiders and other such bugs are like little walking antennas able to pick up on the slightest of vibrations.

Though there not much hive minded like ants or bees or at least not when hunting, but if they were they would and could feasibly build something like that for a bunch of different purposes, even for something as simple as keeping these little towers around to warn them of what kind of danger may be in the area simply by the vibrations these towers would give off. Or who knows. But it does look like its just an egg sack with a little extra protection around it including a fence.

posted on Sep, 4 2013 @ 09:28 PM
link
If they bothered to hang around they would have seen canvas pulled over the frame and fleas riding bearback on rabid ants jumping through hoops of fire and dodging the snapping jaws of earwigs.

In all seriousness very interesting, lots of species are much more intelligent than we give them credit for and they say there is no new knowledge, we take all of our inspiration from nature. 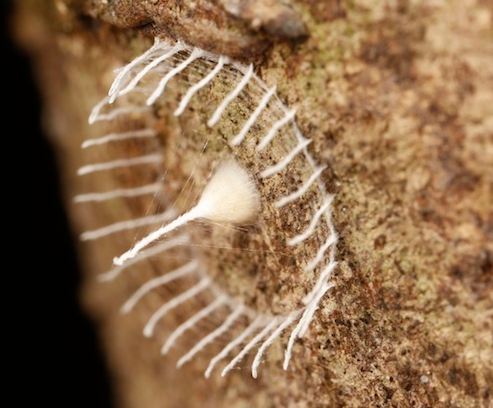 This is a communication device created by very intelligent spider-like entities. The outer area collects energy and focuses it at the central antenna and down into the main control center at the base.

posted on Sep, 4 2013 @ 10:14 PM
link
My guess is that it's the egg sack of an arachnid with integrated defense and food procurement systems. A truely remarkable display of the innate intelligence of a species.

If it was indeed created by an arachnid, it would obviously be a fairly small one. To see such a marvelous survival mechanism employed from the human perspective; is absolutely astonishing and IMO quite humbling. Beautiful, intelligent design brought to you by something likely no larger than a bottle cap. S&F
edit on 4-9-2013 by topdog81 because: grammer