During the simulated, top secret dogfights over Area 51, Palmer had a good idea about the identity of the air base below him. "I could see in the distance the lake bed and the runway and the hangars, and we would go, 'Ooh, that's where all that secret stuff is going on down there.' But that's about as much as we knew. Everybody talked about it among ourselves in the squadron pretty openly. We'd say, 'Oh, that's Groom Lake, that's where the A-12s were flying, the U-2s, and now there's the MiGs out there.' Yeah, we knew all that, and then, of course, what else beyond that, we really didn't know.

Note the Tonopah Test Range MIG program, which was relocated from Groom Lake, is documented in the book "Red Eagles" by Steve Davis. I have the first edition. If anyone has both, it would be interesting to know what was added.
edit on 2-9-2013 by gariac because: (no reason given)

posted on Sep, 3 2013 @ 06:42 AM
link
Here are a couple of photos of F-14s flying with some MiGs. I was under the impression that this was going on after they moved the program to TTR however. Been meaning to get that book and the new one recently published by one of the pilots (don't remember the name at the moment). 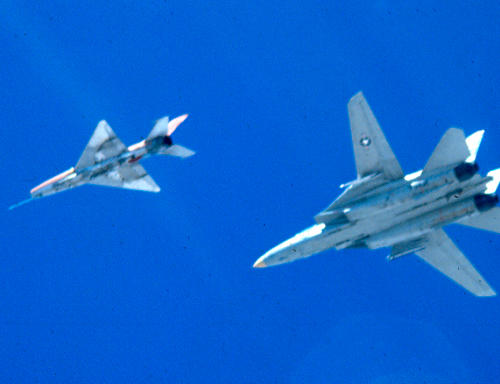 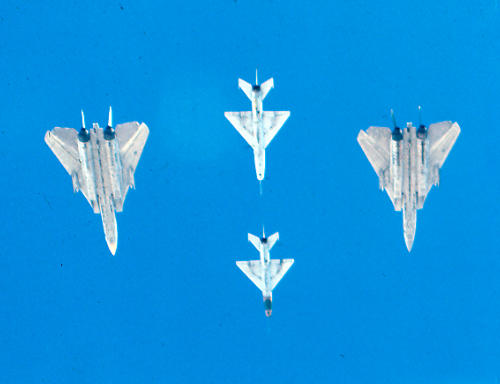 edit on 9/3/2013 by DesertWatchdog because: Forgot the pics. derp

posted on Sep, 6 2013 @ 12:43 PM
link
The Mig testing projects started at Groom Lake in the late 1960's. They were part of three operations running almost consecutively.

Operations HAVE DRILL and HAVE FERRY were first. They primarily did tests on the Mig-17 Fresco.

After that came Operation HAVE DOUGHNUT which tested the Mig-21 Fishbed.

They eventually did mock dogfights with these two aircraft against every type of fighter aircraft that the Air Force had in it's arsenal at the time. As well as the B-52 and B-58 Hustler. This was to test survivability, countermeasures, performance, and to run radar cross-section tests.


Actually, HAVE DOUGHNUT was first, in 1968. This was followed by HAVE DRILL/HAVE FERRY in 1969. Then, beginning in 1970, HAVE GLIB became the umbrella program for continuing evaluation of the MiG-17 and MiG-21, along with foreign threat radar systems. As more aircraft were acquired, a new overall program was established in 1973 (HAVE IDEA), and that was replaced in 1986 (HAVE PHOENIX). But there have also been numerous sub-projects such as HAVE PRIVILEGE (MiG-17 evaluation in Viet Nam), HAVE DRY (MiG-21 vs. F-15), HAVE PAD (MiG-23 evaluation), etc. It's a huge program, and it's still going on.


We have the photos of Sukoi at Groom. But you can just buy those. It would be interesting to see something like a Chinese aircraft, i.e. something that takes some effort to acquire.

I met someone whose daughter was at Wright Patterson doing foreign acquisition. No way to verify this, but they have a vault of cash on the base for such tasks, and fly a C-130 with the money. Seven figures is not unheard of.

The story isn't much of a stretch since we found out during Gulf War II that the CIA was paying off people with money flown into the country on a C-130.


It's within the realm of possibility. Wright Patterson is home to the Air Force Material Command. And I think they still have a foreign technology division.

So if you were going to make a deal to buy some military hardware and smuggle it out of it's parent country, I'd assume you would need to pay in cash.

Like Don Kirlin back in 2009 who bought some Mig-29s from Kyrgyzstan. Paid in cash, dismantled the aircraft, put them in boxes and shipped them out in pieces. He got the first one reassembled and flying in 2011.

Originally posted by allenidaho
And I think they still have a foreign technology division.

My brother in law worked in the foreign technology office for several years at Wright Patterson. He was working the missile division, developing countermeasures to foreign missiles, based on data received from multiple sources, including from what I gather, tests by US forces. I never knew that he did it until his retirement, when we read what his CO said about him, and he mentioned it.

posted on Sep, 9 2013 @ 12:49 AM
link
More than a bit OT, but I was checking out air traffic in Lancaster/Palmdale via the internet and found this company flying a military bird:
Firehawk
N2FH

Lockheed was flying their commuter bird to WJF, then off to Santa Maria.
Lockneed PC-12