New research: The history of Timekeeping


According to the Maya: Tzolkin 4-hau Haab 8-Cumku
"Was seen the image of the turtle"
Letters are invented


According to Maya: World destoyed by The Great Flood
"Dates are invented"
Begin Third Creation


According to Hebrew: The Flood


Possible first Greek Games
Minoan: Year of 62 weeks of 1/5th of a month


Julian Calendar introduced
backdated to the founding of rome
709 AUC


Maya: world destroyed by wind
men turned into monkeys clinging to trees to survive
Odin hangs from the tree of life for 9 days to learn runes
Begin fourth Creation


Dionysius Exiguus: established Christian era dating system
backdated to the incarnation of Jesus
and based on the 95 year easter tables
published 525 anno domini


Era of the Incarnation: liberation calendar after being invaded by Arabs
1180 in Catalonia
1350 in Aragon
1383 in Castile
1422 in Portugal


Dating system of BP, with 1950 as year 1.
B)efore P)resent, or B)efore P)hysics
representing the period before the testing of nuclear weapons
which altered the global ratio of carbon-14 to carbon-12


TdateTime: double precision floating point variable
with the date as the integral part,
and time as fractional part.
Backdated to 30 Dec 1899

We are in the era of a new calendar system,
though most people are unaware of it,
with the Star Trek nerds and their
use of Star-date being the
closest.


And Every time a new calendar system
is developed some form of catastrophy
and/or social upheaval follows. Does
this fit with the readers awareness
of world events since 1995?

As a last comment
I hope my history of calendars
doesn't offend anyone or any particular
cultures sense of self identity.

posted on Aug, 28 2013 @ 01:05 PM
link
The modern era of timekeeping
is based on the radioactive decay of Cesium
in Atomic clocks.

No longer are the seasonal years,
the period of the Moon,
or even the movement of the stars
used to determine Time.

Since the move to Atomic Clocks,
GPS location has been possible.

I don't understand the two question marks
in the quote above.

I fail to see any questions,
just two statements.

Second, The "Maya" may have borrowed their math and how they counted from a much older "Culture and or Civlization" known as the Olmec.

Here is the back of a well known Olmec Stela . If you'll notice they use the same counting and dating method. The Maya in my opinion inherited it from the Olmec.

If the Maya borrowed that from the Olmec then whose to say they didnt also inherit their Myths and Legends as well?

The Olmec are fascinating and elusive.
Some posit that Teotihuacan was
built by the Olmec. If so that
pyramid has the most
incredible feature. 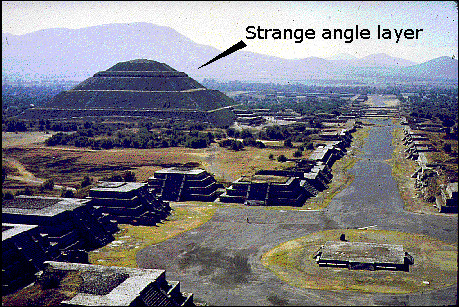 There is the one strange layer
that is at the exact angle required
so that one day out of the year
during the Summer Solstice
when the Sun is furthest north in the sky
that the Sun passes directly over the pyramid.

And for about 666 seconds all four sides
of the strange layer are illuminated by the sun.

From what I have read,
one could see the shadow on the north side
retreat and then return.

This, of course, requires that the pyramid
be located exactly on the Tropic of Cancer.

It used to be the most accurate
summer solstice detecting monument in the world.

I'm not so sure how well it is working now,
since it's restoration.

posted on Aug, 28 2013 @ 01:45 PM
link
I'm actually surprised
that no one has challenged the
specific dating of the invention of numbers.

I guess there are not too many Historians posting here.

I did find this interesting quote
from ancient Egyptian myth during my research.

Before all things was Time, then Desire (Motive), then Darkness

Before Present (BP) years is a time scale used mainly in geology, and other scientific disciplines to specify when events in the past occurred. Because the "present" time changes, standard practice is to use 1 January 1950 as the origin of the age scale, reflecting the fact that radiocarbon dating became practicable in the 1950s. The abbreviation "BP", with the same meaning, has also been interpreted as "Before Physics"; that is, before nuclear weapons testing artificially altered the proportion of the carbon isotopes in the atmosphere.

Before Present (BP) years is a time scale used mainly in geology, and other scientific disciplines to specify when events in the past occurred. Because the "present" time changes, standard practice is to use 1 January 1950 as the origin of the age scale, reflecting the fact that radiocarbon dating became practicable in the 1950s. The abbreviation "BP", with the same meaning, has also been interpreted as "Before Physics"; that is, before nuclear weapons testing artificially altered the proportion of the carbon isotopes in the atmosphere.

Just to restate it in my own words,
so I can be corrected if I got it wrong...

This usage differs with the recommendation by van der Plicht & Hogg, followed by the Quaternary Science Reviews, both of which requested that publications should use the unit "a" [for year] and [color=gold] reserve the term "BP" for radiocarbon estimations.

Either way,
I'm going to edit the original post
to reflect this information.


i thought it applied outside of geological,,as well. I sit corrected, thnk -u

I considered including it in the list,
but the longitudinal line that marks zero hour
didn't start in Greenwich.

Additionally it didn't come with a new calendar system.

But your are correct in pointing out the oversight.

While it was intentional,
my reasoning may not be sound.

Love the topic and thought-provoking insights.
Don't have much to add (at the moment)...but, should I - your thread is now "marked".
Thanks!!!

Forgetting the original keepers of time are we??..yes.. that's right women with their monthlies,who also in my view discovered simple agriculture,after all when we failed to bring back that meat on hooves we still gotta eat..


Alexander Marshack examined the Ishango bone microscopically, and concluded that it may represent a six-month lunar calendar; but see Judy Robinson who argues that Marshack over-interprets the data and that the evidence does not support lunar calendars. Claudia Zaslavsky has suggested that this may indicate that the creator of the tool was a woman, tracking the lunar phase in relation to the menstrual cycle.
en.wikipedia.org...

What ever dates that history 'GIVES AND STARTS' Times and DATES and calenders , is really false to life to even imagine.

posted on Aug, 29 2013 @ 02:09 AM
link
I don't think anyone invents calenders or numbers, they are based on natural constants. I don't think trying to line up calender inception dates with disasters is a very productive use of your time.

"In the Archaic System time notation was written in the U4 System U. Multiple lunisolar calendars existed; however the civil calendar from the holy city of Nippur (Ur III period) was adopted by Babylon as their civil calendar.[6] The calendar of Nippur dates to 3500 BCE and was itself based on older astronomical knowledge of an uncertain origin. The main astronomical cycles used to construct the calendar were the synodic month, equinox year, and sideral day."

"A seconds pendulum is a pendulum whose period is precisely two seconds; one second for a swing in one direction and one second for the return swing, a frequency of 1/2 Hz. At standard gravity its length is 0.994 m (39.1 in). "

A pendulum of 2 sumerian cubits will swing 86400 times day - that is the same number of seconds per solar day that modern science uses today. Originally posted by mikegrouchy
Since the move to Atomic Clocks,
GPS location has been possible.