Ancient footprints on a rock and a nearby engraving of a mysterious flying object are causing a stir in a small Indian village.

According to the Epoch Times, Geologist Nitish Priyadarshi is studying the large footprints in Piska Nagri village, on the outskirts of Ranchi City in Jharkahnd State.

The footprints, which are 30cm long and 12cm wide, look like they were worn by someone in wooden sandals.

Local folklore claims the prints signify the presence of gods landing on site. God-kings of Indian mythology Lord Rama and Lord Lakshmana are believed to have spent time in the area in search of Rama's wife, Sita, says the Epoch Times report.

Mr Priyadarshi said the imprints appeared to have been carved on granite.

"It may have been made by the local people manually at that time in memory of the visitors," he said. "The footprints and the flying object are on the same piece of rock on each other's side. Maybe they were engraved to show that the two king gods arrived at the place on a flying object. 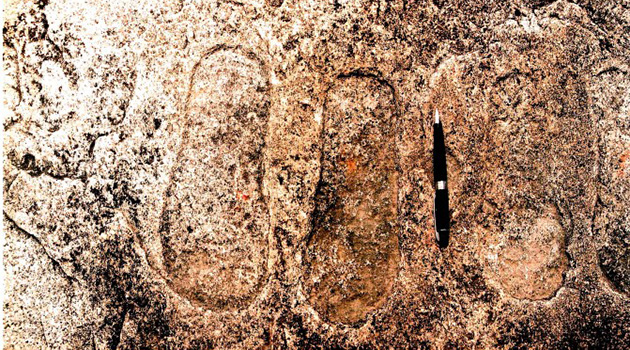 posted on Aug, 28 2013 @ 02:30 AM
link
I wouldn't be surprised that ancient civilizations were being visited by beings from outer space. As described in this video...

...you can see that many mythical beings crafted into the stone structures....but were they? And how were the cave cut with what technology?

But back to the footprints...is it possible that some of the local villagers simply had LARGE feet, like Shaquille O'Neal (shoe size = 23) ????

I don't most Indians, with respect, didn't have large feet back then? Then again, they could have just been oversized sandals made for the purpose of stamping their presence that they can make large sandals???

I am no expert on footprints, but again, it would be nice to hear from archaeologists what they have to say on this discovery.
edit on 28-8-2013 by Skywatcher2011 because: (no reason given)

Skywatcher2011
But back to the footprints...is it possible that some of the local villagers simply had LARGE feet, like Shaquille O'Neal (shoe size = 23) ????


Large? Not really, the footprints I make with my boots are exactly 30cm long and 12cm wide.

Looks like sandals , kid`s size , and along with the location I`d say it is utter B.S .