Special to the SWT


Can you help identify this animal from the picture shown here?

It is unclear if this is an unverified picture of a “Bigfoot.” It was recently discovered on a “trail cam” placed in the nearby mountains.

It was surprising, to say the least, when I discovered the image on the camera’s disc. What in the world can this be?

Carefully scrutinizing the image, it appears that the right arm shows fingers as the animal grasps the base of the tree stump. It also has elongated feet similar to a man’s appendages. Its fur is matted on the back but thin on the arms and legs. Unfortunately, the head and face are not shown by the image taken.

I think it must be a bear. It has to be a gear, does it not? I hunt this area annually and have seen no sign of a Bigfoot. I have seen bear scat and tracks before, so I can identify them.

No unidentified tracks, droppings, or any other indications of a large upright predator in the woods have ever been found, that I know of.

There were no discernable tracks on the leaf-covered ground near the camera where it was picked up. The mystery remains!

Your input would be appreciated.

This looks pretty good. It's new for today. If you go to the link I provide at the end here, you can click the picture for a larger look.

Do bears get mange?


No tale, nor the right shape of spinal pose. The legs do not seem like those of a primate (more ursine) but the upper arms seem too thick for a bear... 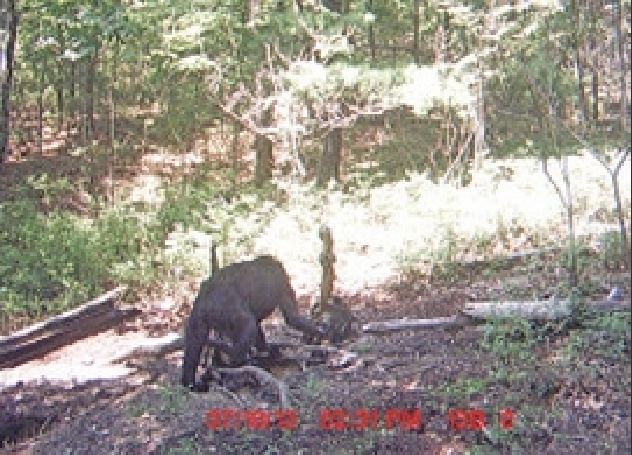 I haven't seen a bear, mangy or otherwise, but you are probably right.
www.olddominionwildlife.com...

some say above is a bear with mange or bigfoot...

(thanks for posting "big pic")

posted on Aug, 26 2013 @ 09:54 PM
link
We know nothing of the game camera involved other than it can do daylight images. But we can make some observations about the image. First, the animal seems to be moving away from the camera. Question: Why isn't there other and better images when the animal evidently was more closer to the camera as it moved along? There should be. So I'm gonna leap and say there were better images, but they were withheld.

Does that mean that the animal is a bear which the other images clearly showed, or could it be the reverse? The animal is a Sasquatch and better images of it were withheld for a reason?

Very interesting animal to say the least, almost as interesting as the questions about why only that one pic.


Six years ago, Bigfoot researcher Rick Jacobs captured two trail cam photographs of what the BFRO believe is a Bigfoot. This latest photograph submitted to the website SouthWesternTimes.com by Roger William looks eerily similar what was captured in 2007. According to Williams, the creature in the photograph appears to have "fingers".

If you look closely at the front right limb, it looks like you can make out the schnauz of an ant eater.


When we lived in mountains we had allot of black bears and right up to sliding glass door, kinda scary lol. Never seen one looked like this. Not sure what it is, don't look like big foot either.

posted on Sep, 8 2013 @ 12:58 AM
link
I think if you look carfully at the place where the arm and shoulder meet, there is an obvious and distinct 'arm-hole' where I would have expected shoulder/arm hair of differing lengths to have made such an 'arm-hole' not possible.

Further down the arm there is a lighter grey smudgey patch which does not belong to anything, and the arm itself looks too smooth and defined to belong to a hairy being like a sasquatch. Sorry, but I feel it is a photoshopped composite back-end of a human with a bit of bear thrown in plus more of the human at the front end to give the impression hands. I could be wrong of course as I am no expert.