Pro Snowden billboards show up at the Pentagon. 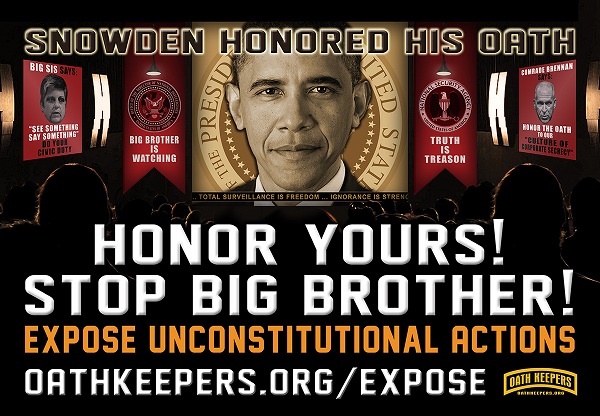 NSA leaker Edward Snowden is the focus of some controversial new signs posted at the Pentagon Metro station.

The signs say Snowden honored his oath to the Constitution by revealing government secrets.


If you happen to be taking public transport to your job at the Pentagon, youre almost certain to see this ad which says that you, like Snowden, need to honor your oath to the Constitution by exposing government crimes.

So whos placing ads in and near the Pentagon? Its none other than The Oath Keepers.

I guess they can expect to get SWAT teamed and arrested. Oh wait, they ARE the police and SWAT teams...

But they're not stopping there:

So far, they've put signs up near military bases in California, Texas, and Georgia... But the group promises it is just getting started. Their website is asking for donations to help get more of these billboards posted, including near the NSA in Fort Meade, Maryland.


Come forward people. America is behind you.

posted on Aug, 26 2013 @ 08:24 AM
link
Its things like this that give me a little hope. Lets just hope that congress doesnt try to pass any laws banning "anti-government" propaganda...


The constitution of USA, is a declaration for a free man. And is the best constitution any nation on this planet has ever handed over to its people. Never give up, never surrender it.


I can see it now:
"All individuals supporting, or circulating pro-Snowden/constitutional propaganda are now considered extreme right wing domestic terrorists and are guilty of terrorism charges as such. Any person witnessing such activity are STRONGLY urged to report said activity to federal authority for further review. Thank you.
Regards,


This is awesome, but it wouldn't surprise me if Stewart Rhodes is the next car "accident" victim.

posted on Aug, 26 2013 @ 02:21 PM
link
I think that's been the whole point of the Snowden/Assange psy-op, to weed out the real whistleblowers. Reading articles on ATS has shown some strange coincidences like the Booz Allen connection and the simple fact that most of what was released was already well known/suspected.

That is what patriots do, they keep to their ideals in the face of opposition, and in this case they put it right in their faces.

Good lesson for all of us on ATS.

No matter what Big Bro tries to counter, there will always be other ways to get the word out and unify the people.

posted on Aug, 26 2013 @ 06:27 PM
link
Oath Keepers is probably ran by the NSA to bring in some extra funds and collect a list of those donating to the effort jk

Seriously cool and brave move by the group.


I can't help it. That's so funny I could just burst!

The new programs, new initiatives and 'Be your brother's keeper by BEING big brother' efforts have been nonstop and intense.A couple sites which carry gov't documents have shown the flurry of efforts and a good part of them? Thought up and run by men who use that Metro station daily.

That's some quality entertainment right there. I'd love to just sit across from that sign to watch the reactions of the Pentagon people going to work. Some showing nothing for fear of being seen as sympathetic and the ones they fear, ready to blow a gasket. Nice Catch!
edit on 26-8-2013 by wrabbit2000 because: (no reason given)


Glad to see them pop up again, i feel like the oathkeepers kept their head down around the time the bombing in boston happened

posted on Sep, 1 2013 @ 02:39 AM
link
Yeah, let the NSA find out you've been donating money to an organization which will soon be classified as a terrorist organization.

This should be good.