posted on Aug, 15 2013 @ 03:34 AM
link
Turns out it is aliens! But cute cuddly ones, so its all good. Funny I was just thinking about my experience which I recount in my sig thread about ufos and musical tones before I watched this episode which can be seen here: www.free-tv-video-online.me...
Obvious Close Encounters of the Third Kind references, but we all know Spielberg was an amateur Ufologist, right? Music/strange tones has long been associated with UFOS. Vimanas anyone? hindu wisdom vimanas " At Rama`s behest, the magnificent chariot rose up to a mountain of cloud with a tremendous din"
"Bhima flew with his Vimana on an enormous ray which was as brilliant as the sun and made a noise like the thunder of a storm"
"The seven greatest capital cities of Rama were known in classical Hindu texts as The Seven Rishi Cities According to ancient Indian texts, the people had flying machines which were called "Vimanas." The ancient Indian epic describes a Vimana as a double deck, circular aircraft with portholes and a dome, much as we would imagine a flying saucer. It flew with the "speed of the wind" and gave forth a "melodious sound." There were at least four different types of Vimanas; some saucer shaped, others like long cylinders ("cigar shaped airships").

Here's the google trends for it: 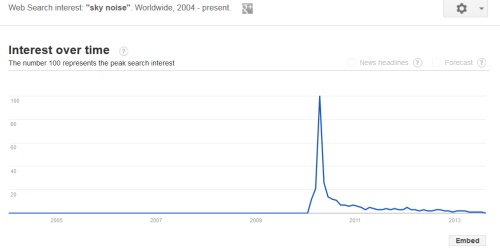 Its done, its over. Nobody is doing that old thing anymore.


Untrue, and anyone who knows anything about it may possibly care to explain that to you, but I do not care, so I will not comment further other than to say that it is not a hoax. Hoaxes have certainly been made, but so what? Who cares about those, all of the people who have experienced this know it is not a hoax.

Ive not seen it yet, could you change the title to something that doesnt tell the plot please? Im sure theres a few others that love the show and do not want to see anything about the latest episode!

The name of the episode is "game of tones" My title is not really a spoiler, they just hear a noise that they do not understand....like the "sky phenomena" I did not disclose exactly what happens in my title or post. Watch it though, it is a good one.

Sky noise is a hoax meme that has already run its course.

Maybe in pop culture, but I still remember the one I heard once...was over a buddy's house (he's ex-Army, and heard it too, as did everyone else in the house of course). Both of us grew up around aircraft, and neither of us could identify it (everyone was looking at us to do so...). Was like a long sonic boom. Very distinct, and unlike any other aircraft either of us every heard....and this is from guys who can usually identify plane variants by sight. It was twilight, but we couldn't see the craft anywhere...


Whatever you have there in the US seems to be yours cause other that commercial airliners and shooting stars, rarely satellites, I don't have aliens walking near my bed, I don't hear strange sounds outside, I don't see strange objects.


I'd have to agree. (that it's some kind of aircraft of ours). This was during twilight, so not deep dark night or anything. Must have been high up, as it wasn't visible. No contrails or anything. Only heard it that one time. And this was only about a week after the same sound was heard elsewhere in FL. We have several air fields in the area, including an AFB. So, who knows?

The way a sonic boom works, it shouldn't be a long thing...so I'm at a loss.

Long been a mystery: