posted on Aug, 14 2013 @ 10:44 PM
link
I'll start by saying that I'm skeptical of this myself but I decided to post this photo here to see if anyone has any ideas as to what this is.
I found this track when I was on vacation in the Alberta Rockies (where there have been bigfoot sightings). I was out hiking, the trail was a dense wet sand and was full of tracks from people, dogs (there are two next to the track), and bears. But there were so many tracks that most of them blended together, which is my main idea that the track is blended of other tracks. This was the only track I found though there may have been others that were walked over and ruined (like I said most of the human and animal tracks were like this). 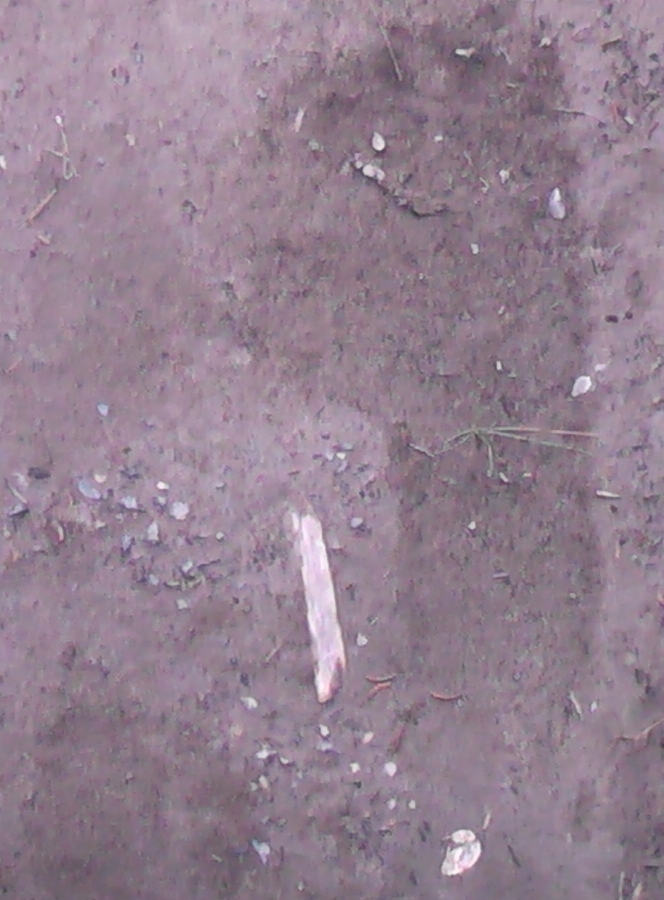 I notice it has what look like toes at the end but it doesn't show up as well in the photo. As well most of the other tracks from people didn't seem to make as well of an impression in the ground. So I want to know if anyone here thinks this may be a bigfoot track or a distorted human track


That is a satchmo track if I ever seen one. I have a couple casting that look similar.


I didn't smell anything, but It looked like there may have been a light rain which may have washed out the scent.


I looked a few pictures up of tracks and I did see some resemblance, that's the only reason I posted this

posted on Aug, 15 2013 @ 12:18 AM
link
Could indeed be a mixture of track or something more... Good shot but wish it was more defined. Possibly, send the original of the image over to Dr. Jeff Meldrum ISU Cryto/Bigfoot Researcher and or check out some of his research: ISU - Jeff Meldrum . Contact Page


It's certainly intriguing! Do you have a size estimate? That could help. I don't see any sign of claws, as would be expected for a bear or dog, even if a blended print. Best recommendation, contact someone like Meldrum, as someone else suggested, and see what he thinks. He's a serious researcher, from all I have seen, and has looked at a LOT of such tracks.


Nice pic! It certainly looks like a Bigfoot track to me..whatever that means.

Do you mind if I ask roughly where in the Alberta rockies you were?? I'm headed to the Banff/Lake Louise area tomorrow to do some camping, mountain biking, and maybe even some hiking.

I'll definitely have my camera with me at all times...


I don't remember the exact size but I think it was around 3inches longer than my foot(I wish Id thought to do a side by side comparison with my foot) which is a size 13 shoe, which would make it 14 inches


It was on a hiking trail in Canmore, the track was facing in the general direction of Banff so it might be there by now.


Thanks I'll send it to him and see what he has to say.


How large was it? There's no sense of proportion to the photo, though it does look interesting.


my guess was around 14in, like I said I regret not thinking to take a photo next to my foot


I saw that when I went back through the thread...

If it is a sasquatch track, it would be a fairly small to medium sized one. Possibly an adolescent...or so I surmise.

What's the history of Sasquatch sightings/encounters in that area?


I don't know the details of the sasquatch sightings in the area, but I have heard the Alberta rockies have had many bigfoot sightings within them. There have been some sightings and tracks in Banff which I was near. That area has a lot of protected wilderness so it would make a good place for a creature to hide.


My mother in law leaves tracks like that.... no seriously, this is very interesting and needs to be viewed by someone who knows what they are looking at/for... good job taking a shot of it... and thanks for posting and sharing

posted on Aug, 15 2013 @ 03:26 PM
link
We lived in the mountains in Colorado and often saw tracks. Not much definition in the photo but it looks similar. I never saw one but we often heard strange calls and heard knocks. It is nothing like you see on TV with that brfo or whatever they are called group.

I looked them up once to share some info, what a joke, they are all about making money, lol. There was a fish and wildlife guy who was a big sceptic, he created a bunch of experiments to see if he could recreate the prints and how much weight it would take to make them.

After his experiment he was no longer a skeptic.

We always knew when they were around because all the game acted different, even the mating pair of mountain lions acted different. The elk herd were especially spooked. I have seen things but could never say what it was, I mean your eyes often play tricks with your mind and that Bigfoot you swore you saw turned out to be several elk moving through the trees.

I have seen track in places I know there were no hoaxers and I do believe they are there.


First, I sympathize with you in a way. Tracks (even of mundane creatures) can be difficult to photograph well. What can look crystal clear while you're looking at it, can look vague and lacking detail in a photo.

There are things to consider. One is that without a "trackway", one track in isolation can be a bit misleading. Can only make out 4 toes, which don't really seem arranged properly. Did you count them while you were there? It looks like a conglomeration, at least something else has distorted it (not saying it definitely is) from the pic IMO. Thanks for sharing.


Always put something for size comparrison next to the track ie: lighter, coin, etc.