posted on Aug, 14 2013 @ 03:28 PM
link
Almost 300 towns at risk of running out of water in just one state. I think this is where I get to say "I told you so". I've been telling people for years that our country is overpopulated, and that combined with climate change is causing havoc. Even a sparsely inhabited state like New Mexico is having serious problems. I don't think this will end well.


The sustainable population size for any given area varies from area to area primarily based on environmental conditions. An area with more water and resources can sustain a larger population than an arid, high desert environment. In that sense, whether an area is overpopulated is entirely dependent on those climatic/environmental conditions. When an area becomes overpopulated, the available resources start becoming depleted. This is what happens in many places in Africa and that is what is happening in New Mexico.


Thank you Alice! I appreciate such a thorough and well articulated response. That makes 100% logical sense to me.

I heard they are working on a way that is "cost" efficient to purify Ocean water into drinking water? Have you heard anything about this? Do you think this would be a for us to mitigate a water crisis, be it bath water, drinking water et cetera~

Though... Thinking about Fukushima and the Oil Spill plumes still curculating under the ocean currents... I'd be scared to try it... 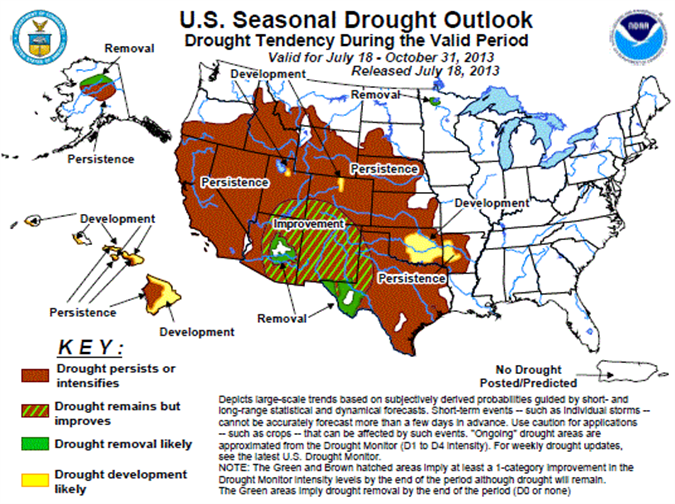 That bad news is? The Mountains to their North and snow pack country aren't improving yet. That does look quite a bit better than this time last year though. Now it'll just take time for real change to make it to the water table where drinking water is pulled from. Talk about a lagging indicator. lol.... The ultimate form of it.

I heard they are working on a way that is "cost" efficient to purify Ocean water into drinking water?

Everyone in the world always brings up desalinization. If it was feasible to make water in the middle of the continent wouldn't we already have it? Why can't people just face the truth and admit that we can't grow forever? Either we stop ourselves or nature will stop us.


Hey I totally agree CB, but what do you do? Sterilize the masses except the elite few? That's why it's always brought up. Just like the energy problem, we have a lack of water and massive bodies of Ocean water.


The last time that I saw anything on desalination, between the actual process of desalination and costs of transport, it still wasn't an effective solution. However, that was a few years ago so I'm not sure if they've improved on any of the technology. Such a solution wouldn't effective for New Mexico, however, as it is very much land locked and a good distance from any salt water source.

I was living out in the Four Corners region during one of the area's worst droughts in "75 years" (early 2000's). There was so much death from wildlife to cattle to horses that in some areas the flies were thick in the air. It was terribly heartbreaking. The government was air lifting water for human consumption into some of the most stricken areas but people still were having to sometimes drive 60 miles or more to obtain water on a daily basis. That is happening all over again this year: indiancountrytodaymedianetwork.com...

Curiously enough, the Navajo Nation, whose reservation encompasses a large segment of land in the Four Corners region, has been having to battle to retain their water rights due to this water crisis. www.daily-times.com... You don't find swimming pools or lawns on the rez. Or much landscaping at all for that matter. You do find it in places like Farmington, NM. I have zero pity for these towns because the inhabitants have been largely stupid in regards to their water consumption for decades. They pretended they didn't live in a desert and now they are paying for it. Or asking the more water frugal Navajo to pay for it when they are in a crisis of their own.

Sorry if I sound extremely harsh on the subject but really, they should've seen this coming. I saw so much that appalled me in terms of water use in the SW. Did you know that in Phoenix, they were spraying water mist all day long on shoppers at malls? The San Juan and Colorado Rivers are overtaxed and frequently for comfort and/or aesthetics.


I really don't even think it's a growth problem. Honestly? I think it's a greed and arrogance problem. I'll be willing to bet the state of New Mexico could support many more people than it does right now. Of course, those people would have to be willing to live a desert lifestyle in the ..doh! .. desert! Something I never saw much of when trucking around New Mexico. Oh... The Natives lived that way...but we call that grinding poverty, not being one with nature. Not like that....

Friggen people in Albuquerque, Las Cruces and other places think they can live like they were in Seattle, Washington with green lawns, regular car washing and even swimming pools in the backyard. I suppose that's all fine and good to have if the area supports it with resources ...but of course, NM, Arizona, Nevada and many others flat don't. Oh..but don't tell people it's not Burger King to have it "their way". They'll sue for the right to fill the in-ground pool.

Great minds think alike and all that? Must be.. believe it or not, I was writing while you were posting and hadn't seen a thing you'd said in advance. Almost overlapping for points though.
edit on 14-8-2013 by Wrabbit2000 because: (no reason given)

posted on Aug, 14 2013 @ 04:20 PM
link
While it is true that the drought here in New Mexico is one of the worst we have ever seen, it has impoved this year. We have recieved more rain than we have in a long time this year. That is not enought to break the drought though, that will take years of good rains. One topic that comes up every year is the floods in the South. Each year while the are floding our mighty Rio Grande doesn't make it much past Albuquerque. People ask why we don't build a pipeline from there to here so that when the floods hit there, they can kick on the pumps and water our chile! I know, cost, profit motive, land access, there are many things standing in the way, but we can dream can't we!


I don't fell you sound harsh at all. Actually it's a very logical deduction you made. The situation itself is very harsh and for lack of better words.... sucks~

Times like these I'm glad I'm near a large body of water like Lake Michigan, not that we don't have our own water problems. Just not the likes that are being felt in other locations.

posted on Aug, 14 2013 @ 04:32 PM
link
I agree with the learning to live in the desert. I cannot understand why there are so may lush green golf courses around here.


I cannot understand why there are so may lush green golf courses around here.

That's a conspiracy all itself barracho~

Different type of grass that thrives in the heat??? Short cut, crab grass?


Well, that's because you can't hear the acidic tone in my voice when I talk about this subject in person and I tend to omit rhetoric about how the Gobble-God strikes again. I can get quite nasty about it on the outside but really, I'm crying inside. I remember driving out to my son's school on a back road that ran along what was normally a creek only to come around a bend to find the carcass of what had once been a beautiful horse, completely gutted and ravaged by scavengers. Drought horrors tend to fill my sights when it comes to the subject of water in that area because I've just seen far too much death and too many flies. Then, we'd drive to Albuquerque or Phoenix to see inhabitants living in blissful delusion. It was sickening.

posted on Aug, 14 2013 @ 04:54 PM
link
My wife and I moved here to Carlsbad in July of 2010, just ahead of the drought. We've had some rain this summer, but a lot of normal years will be needed to bring things back to "normal." In the meantime, a few (or several) thousand people have moved into town, and apartment complexes are sprouting everywhere. We're bugging out to Alabama next spring...

posted on Aug, 14 2013 @ 05:03 PM
link
Honestly the answer is staring youse right in the kisser......
We build a pipeline from the ocean to the floor of Death valley.......
Once the water starts to flow it will need no pumps...itll just syphon because the valley is waaay lower than sea level......
Now, when the water starts to flow we use it up in solar powered evaporators....dropping out the salts and stuff(perhaps a modicum of precious metals even....)
The pure water is now ready to pipeline outwards from there...
OR just flood the valley and have an inland sea, which would moderate ALL existing patterns and produce boo coo rains....
done deal, and almost free......Oh and I almost forgot to mention the fall of water could also produce electricity as well.....


You know what's even cheaper than building long, massive pipes, desalination plants, or flooding Death Valley? Cutting down on the number and lengths of showers people take, letting your landscaping go back to nature, draining your pools, turning off the water when you brush your teeth, shutting off your fountains and those damn misters that spray water endlessly on shoppers. It's called living in respect of your environment and not in idiotic and abject defiance of it. And guess what? It saves money on your water bills and is free. Go figure.


It would be immensely helpful if each and every golf course in that drought area immediately ceased from having perfectly green "greens"...it's an embarrassment....
Those water restrictions should also extend to residential and business lawns.....

posted on Aug, 14 2013 @ 09:52 PM
link
no source, but it's common knowledge that many aquifers are drying, being used faster than they can be replenished. a lot of the water taken from deep wells now (example, the Oglalla aquifer) is hundreds of years old.
I unnerstand places like Vegas have to import truckload after truckload of water. that doesn't sound sustainable.
if things get worse places like that will look like something from the Mad Max movies.

why does humanity insist on living in such unsuitable places?
I really wonder if maybe the 20th century was an aberration in which *Man* used cheap fossil fuels to make temporary living conditions and lifestyles. do any of us really think this current society can continue much longer, physically/environmentally, economically?

to paraphrase Louis XIV, 'after us, the catastrophe'. ('apres moi, le deluge' was his original line)

I totally agree CB, but what do you do? Sterilize the masses

Actually, we should sterilize people- free vasectomies and tubal ligations for anyone who wants them would be a very good start. Then cut back on immigration and cut back on pregnancy medicaid, at least for young people. We shouldn't be paying for teenagers to have babies.