UFOs over the Basilica Minneapolis August 2013

Quite good footage, gets good around the 1.15 mark -

Here is a snippet from the MUFON report -

Eyewitness: I was walking to downtown, from my place in uptown, via Loring Park. I spotted two objects hovering in the NE sky. At first I didnt pay much attention to them as I thought it was just helicopters perhaps. But then, one looked like it was sort of checking out the Basillica. Im not sure how far away they were, so it may have just been a quirk of viewpoint and unrelated to the Basillica.
That struck me as interesting so I decided to record them with my Galaxy Note 2 phone. I also tried to get enough reference points in some of the shots to triangulate size if someone is interested in doing so. Im not sure what the objects were. Im inclined to think they were manmade. They werent helicopters though, at least not normal sized ones.. nor did they have the correct lights for that sort of vehicle. (Perhaps Im mistaken?)
The objects themselves were dual colors. They looked like two square lights of some sort attached to one another, which you cant tell from the video due to the low quality. If I remember correctly the colors were a solid blue and green, but dont quote me on that... I cant recall for sure. In the video each object appears a different color versus each being a dual color.

FOX 9's Bill Keller contacted the Minneapolis-St. Paul International Airport and the FAA, but neither had any reports of sightings. Neither did law enforcement agencies, who added that they are a "long way" away from using any type of drone technology. When asked whether the lights were true UFOs, Brian Taylor, director of the Uninhabited Aerial Vehicle Lab at the University of Minnesota, said simply, "Sure. It's unidentified." Taylor told FOX 9 News the FAA only allows research groups to fly UAVs at specific places for specific reasons, so his lab wasn't behind the bewildering lights.

So that would rule the airport out, and there is no drones in use in that area.

Fox9 then talks to Tanner Becken of Hobby Warehouse who believes they are 'quadcoptors' similair to the ones he sells.

"I guess I thought right away it was a quadcopter," he admitted. "Just the way the lights were and the way there moving around -- looks like the quad copters that fly." Becken told FOX 9 News the store has sold about 40 of the high-tech aircraft in the past 6 months. "It's hard to tell with these where they are," he continued. "If you're up 100 feet, it looks like it's a lot farther up than what it really is." With powerful batteries, the choppers can stay airborne for about 15 minutes. "The lights are just to be able to see it and orient it," Becken explained. "They're not specifically for night flying. They're more to tell direction during the day."

Quadcopters? Is it that common to have someone fly two about at nighttime?

anyway here is the link, you can watch the news report


The guy on the video says "I swear I hear propellers or something" , I think he may be filming a couple of quadcopters .


Yep... In this frame you can see the red and green navigation lights of two copters facing the viewer. 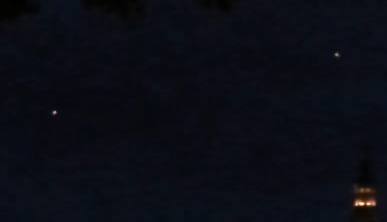 
Yeah I think you may be right.

posted on Aug, 14 2013 @ 04:12 PM
link
I thought that the two crafts were going to collide or join together at 1min 27seconds into the video, but they were probably further away from each other than they appear, but they appeared to be really close...

That's the trouble with film footage at night, you can never really tell the distances between objects, maybe others can, but I can't. I can't even read the print in a daily newspaper.....

The last two have been very disappointing.
edit on 14-8-2013 by PhoenixOD because: (no reason given)

Granted the last one was crap,

I thought this one was pretty cool,


i take it all back then.


Reminded me of Chinese lanterns, as if drifting with the breeze and then lighting down to the ground. But the dual colors could have also been the red and green lights on helicopters. I noticed some green blinking at one point.
edit on 14-8-2013 by g2v12 because: (no reason given)


Dang they debunked it...

I thought we would see something cool up here in Minnesnowta for once.

Do you also notice that we NEVER get videos from closer to these lights in the sky or directly below them is that because people can see what they really are then!


at 2:56 the person taking the video reports hearing propellers (rotors)...there is a hospital in that direction that happens to have a heliport...looking at google maps there are also a few military bases in Minneapolis...hard to say what they are but they are strange...I don't think they are over St. Basilica but much further away...just happens to be the vantage point of someone taking a video of the place head on...

Hospital is North Memorial Medical...
edit on 17-8-2013 by chrismarco because: (no reason given)