How would you respond (I know it's in Antarctica) but what if!~ YOU SAW THIS~ 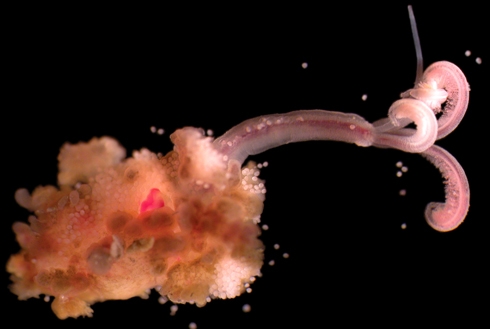 Bone-eating worms live by eating stripped skeletons of dead whales, secreting acids to dissolve their way to a good meal. Formally, five species of these worms were known. However, after conducting a recent study, Adrian Glover of the Natural History Museum and his team added two more names to this list - Osedax antarcticus and Osedax deceptionensis. They were found in the Antarctic waters.

Now, there are many threads on ATS regarding the "ice" metling in Antarctica... Majority.... "What Lies Beneth" (Start Drama Drumming) Well, fellow ATSer's... We now know there are BONE EATING WORMS!

"The deep sea that surrounds the Antarctic continent is one of the least explored ecosystems on Earth," Discovery quoted Glover as saying. "The organisms that live there are dependent on a supply of food from the surface, in extreme examples this can be the remains of a whale or piece of wood. These large 'organic-falls' are unstudied in Antarctica."

Hold the "gosh darn phone" ~ "Least Explored"???!!!! As in we are trying to move a colony of Human to Mars.... Yet we dont' know about this ecosystem??? What else might be lurking in the cold watery depths of this Antarctic Abyss..... Is it me or does this not seem like a backwards situation...? But have no fear! WE have found the WORMS!

Bone-eating worms were first reported in 2004. The threadlike creatures, varying from 0.6 mm to 15 mm in length, are mouth-less and gutless, yet they're able to feed on the skeletons of dead animals, including whales, birds, fish, reptiles, and even cows. Previous studies have shown that the worms form large colonies of elongated females, their trunks ending in reddish, wavy plumes that function as gills, while their greenish, root-like structures release an acid that enables them to tunnel into the bone. The males, in contrast, aren't readily visible, because they're non-feeding dwarfs that live in the gelatinous tubes surrounding the females.

So... This isn't the first time we found the Bone-Eating worms.... I might have over dramatized this... NOT! These are a newely found species~ /end sensationalizing

It really amazes me that we dont' know everything about our own planet yet try to venture off to the far reaches of the galaxy we reside. Let alone the possibilities to find new cures and medicines that are in the depths of the oceans that are still unknown to us in this day and age.

The ice is melting folks. This is a fact. Faster than most would anticipate or even postulate. Humanity does not know what we will ultimately find in the depths of the Antarctic. This is what tingles my mind and tantalizes it. Even day dream of what we might find.

Maybe Ancient Structures? Maybe new species of Whales and Sharks that live deeper and in colder water than the Greenland Shark??? (I think that's the one i'm thinking of, if i'm wrong let me know)

As scary of a time it is to live on this Earth, it's also the most exciting. At least for me it feels like we are reaching a pinnacle to where "Everything" can change as we know it, in the blink of an eye.

And it could all start with this "Bone-Eating Worm"~

Hope your enjoyed my sensationalizing OP
edit on 14-8-2013 by sulaw because: (no reason given)


I think there's a horror movie for somebody to write.

Act1. Marine biologist comes back from Antarctica. After a day or so he doesnt feel well and breaks a bone in his leg while standing up.
Act2. He dies. Everbody panics. Main actress (Gwyneth Paltrow) gets contaminated and has only hours to live.
Act3. Somebody finds an antidote.


That is LEGENDARY~ I can see this being played as a Sci-Fi "original".... Like Sharknado~

posted on Aug, 14 2013 @ 09:31 AM
link
awesome find... I'm on my cell phone so my response to have to be short. I will try to calm it more later on I might actually went to your story another friend of mine I actually found this interesting.
Ask for the movie actually pretty cool original