Was that a perseid meteor I saw?

posted on Aug, 13 2013 @ 12:36 PM
link
Hi ATS. Last night (aug 12/2013) at approximately 10:30pm MDT, my husband and I saw what we originally thought was a perseid meteor over our house. However after googling other meteor pictures I'm not so sure anymore. Here our some of the facts and what we saw (sorry no pictures):

-We are located in Edmonton, Alberta, Canada.
-The moon was in the lower south western sky when we saw this 'meteor'
-This 'meteor' was larger than Venus would appear in the sky and a bit brighter too
-It caught my attention in the western part of the sky and it then proceeded to move, fairly quickly at times, towards the east.
-There was no streaking/shooting star tail. It simply moved across the sky.
-At one point it appeared to simply stop, then start moving again but slower.
-Eventually it became fainter and fainter in the south eastern sky that we could no longer see it.
-It did not dip below the horizon and the sky was clear last night so other stats were visible.
-We did not see any other star/meteor movements in the sky, nor did we see any shooting stars.

What on earth could that have been? It was too large and bright to be a satellite, plane high in the sky, or helicopter. Could it have been part of the perseids meteor group that didn't enter the atmosphere? Do these meteors move west to east in the evening? I'd love to hear your thoughts ATS!

It sounds like you likely saw the space station (ISS). I viewed a few flyovers in the last several days here in the US Northwest. Your sighting can likely be confirmed by looking at one of the sites that tracks it. I'll see if I can find it.


I was watching the other night, here's what I noticed:

A few slow moving, tailess meteors that appear to be bounce offs, they don't enter the atmosphere, they bounce off and sometimes look like they are moving a little erratically. i tracked a few of them for a few minutes until they were too faint to see.

A few others were the typical bright streak that disappears pretty fast.

And, they were coming from all angles, some went from left to right, others right to left, I'm not sure what direction I was facing exactly but it would have been looking roughly south from my position in NB, Canada.

Without video or pictures it's hard to say, but from your description it doesn't sound unlike a meteor.

This is where critical thinking and Occam's razor take over for me:

Perseid meteor shower takes place for a few evenings, the 12th being the best with anticipated 50-100 meteors per hour.... Strange lights in the sky are more than likely going to be meteors.
===

-At one point it appeared to simply stop, then start moving again but slower.

I don't think the IIS would be stopping and starting. A meteor that approaches at the wrong angle and bounces off might appear to make a directional change, and from the viewing angle, might appear to stop and start. But only once.

I guess I'd grab stellarium or one of the other similar programs and take a peek at what you would have seen at that time to at least rule things out.

posted on Aug, 13 2013 @ 12:57 PM
link
Aye, it does sound like the ISS - as bright as Venus and took a couple of minutes or so to cross the sky? Meteors are typically only visible for a couple of seconds or less

This is a 30sec exposure picture I took of the ISS over England at 11pm last night (whilst out looking for Perseids, which saw but failed to photograph): 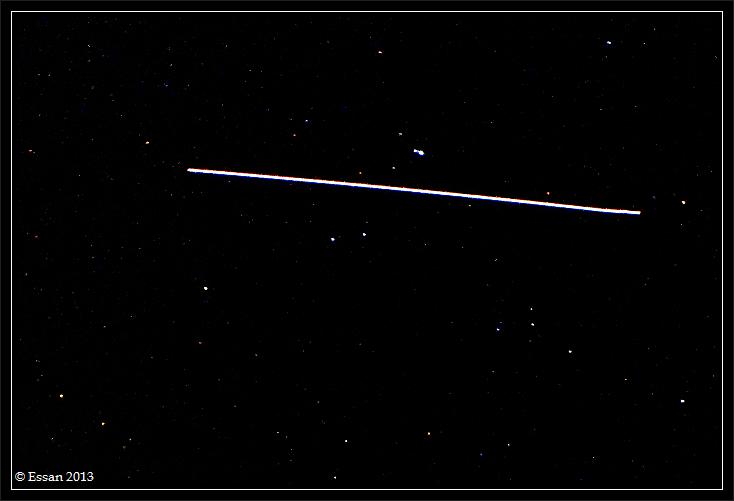 ISS flew over your area West to East...

EDIT: Also compare the 62 degree max elevation to your sighting... 90 degrees is directly overhead and 0 degrees is the horizon.

I suggest going out again tonight and watch the ISS to see if that is what you saw last night.
edit on 13-8-2013 by Zarniwoop because: (no reason given)

posted on Aug, 13 2013 @ 04:07 PM
link
Except the ISS doesn't stop and then move again slower. Neither do meteors, or any other space objects. It was probably a helicopter or a sky lantern. The ISS and satellites crawl across the sky at a steady pace, and meteors streak pretty fast. Satellites can sometimes flare brighter as they glint in the sun, or gradually disappear as they pass into the Earth's shadow.

Originally posted by AndyMayhew
Aye, it does sound like the ISS - as bright as Venus and took a couple of minutes or so to cross the sky? Meteors are typically only visible for a couple of seconds or less

This is a 30sec exposure picture I took of the ISS over England at 11pm last night (whilst out looking for Perseids, which saw but failed to photograph):

I was out till 3:30am trying to take pics of the Perseids for my local news paper. saw many , all to faint to be of any use when processed.

What i did see at one point was a super bright light in the sky off on the horizon. Far , far brighter than any star or satellite. It did'nt seem to move at all , it just sat there for ages getting brighter and brighter. It made no noise at all. After about 5mins its started to move to the right very slowly, that's when i could see a red blinking light, followed by the familiar drone of a jet engine. It had been flying directly at me, I can see how people get mistaken easily.


Except the ISS doesn't stop and then move again slower

True. But your eyes can play tricks on you when watching an object move across the sky.

Can we SEE a single meteor as referenced in this thread? I mean to ask, its PERSEID METEOR SHOWER, correct?
Can we see just one? Is there such a thing as a PERSEID METEOR out on its own?

Arent they grouped together...or at least if the OP was looking long enough...wouldnt others in the shower soon appear...thereby identifying it?

Sorry for the questions...but..ENQUIRING MINDS want to know!


don't be so quick to accept iss explanation.

last night I saw several events which fit your description. I have also seen iss. this was not iss.

slow moving straight path like a satellite... then a bit of flashing... more slow movement ...disappear. very very high up, higher than plane flashers. but also many typical meteors.

Originally posted by ScubaGirl
Mystery solved.....the ISS just passed and that's exactly what we saw on the 12th. Thanks for your help ATS.

And btw isn't it an amazing sight? Always remember the first time I saw it - a real OMG What's That?!!!! moment.

I was privileged a few years ago to see the space shuttle flying just afore the ISS - sadly something no longer to be seen.


Always remember the first time I saw it - a real OMG What's That?!!!! moment.

Me too... just lounging in the backyard at the time and WTH???

Made me go do some research. Now I share with family/friends on when to look up