posted on Aug, 13 2013 @ 09:37 AM
link
In Masonry there is mention of the lost word. Hiram abiff was in possession of it and he had it inscribed on a golden triangle around his neck. The legends say he was killed for this "word" but what was it? 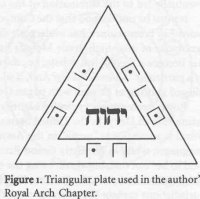 In ancient times this word was known as the name of the lord, unfortunately this was later misunderstood as the name of God. The lord refers rather to the keeper of the knowledge ie the lord or hierophant of the college...madam Blavatsky sums it up well:

“This race could live with equal ease in water, air, or fire, for it had an unlimited control over the elements. These were the ‘Sons of God’; not those who saw the daughters of men, but the real Elohim, though in the oriental Kabala they have another name. It was they who imparted Nature’s most weird secrets to men, and revealed to them the ineffable, and now lost ‘word.’ ”

“This word, which is no word, has travelled once around the globe, and still lingers as a far-off dying echo in the hearts of some privileged men. The hierophants of all the Sacerdotal Colleges were aware of the existence of this island; but the ‘word’ was known only to the Java Aleim (Maha Chohan in another tongue), or chief lord of every college, and was passed to his successor only at the moment of death. There were many such colleges, and the old classic authors speak of them."

"Centuries after our era the Initiates of the inner temples and the Mathams (monastic communities) chose a superior council, presided over by an all-powerful Brahm-Ãtmâ, the Supreme Chief of all those Mahâtmâs.
This pontificate could be exercised only by a Brâhman who had reached a certain age, and he it was who was the sole guardian of the mystic formula, and he was the Hierophant who created great Adepts.
He alone could explain the meaning of the sacred word, AUM, and of all the religious symbols and rites. And whosoever among those Initiates of the Supreme Degree revealed to a profane a single one of the truths, even the smallest of the secrets entrusted to him, had to die; and he who received the confidence was put to death.

But there existed, and still exists to this day, a Word far surpassing the mysterious monosyllable, and
which renders him who comes into possession of its key nearly the equal of Brahman. The Brahmâtmâs
alone possess this key, and we know that to this day there are two great Initiates in Southern
India who possess it. It can be passed only at death, for it is the “Lost Word.” No torture, no human
power, could force its disclosure by a Brâhman who knows it; and it is well guarded in Tibet."

"This is the Form of the Magical Triangle, into the which Solomon did command the Evil Spirits. It is to be made at 2 feet distance from the Magical Circle and it is 3 feet across. Note that this triangle is to be placed toward that quarter whereunto the Spirit belongeth. And the base of the triangle is to be nearest unto the Circle, the apex pointing in the direction of the quarter of the Spirit. Observe thou also the Moon in thy working, as aforesaid, etc."


Its not called the "lost word" for no reason

It is said the knowledge has survived with some masters in India and Tibet, its not known to the masses ie a highly guarded secret.

It may be what was called the Brahmashira in ancient vedic text, a secret word (mantra) whispered into a blade of grass charging it with the breath of the universe!


In masonic legend, Hiram Abiff takes the word with him to his grave, but the way the story is told, the word could not be given except in the presence of three, King Soloman, Hiram, King of Tyre, and Hiram Abiff. The craft was interested in gaining "the secrets" of a master mason, yet when Hiram Abiff was killed, "the masters word" was lost. The "word" is probably a metaphor for a key piece of knowledge in construction. (If the legend is to be taken literally)

Or.....it could be a story teaching the lesson that no matter how much you think you know, there will always be knowledge that eludes you.

Great thread topic. I hope to learn from it.


I always believed the lost word to be AUM.

It is both expansive and compressive. The sound of the universe, and of creation. It is also the mystical sanskrit sound associated with the pineal gland; or the Third Eye...


AUM is the building block of all mantras that have any power however the true pronunciation of AUM is only given to initiates ie when you hear people chanting OM that is not the correct sound. It is also forbidden for an initiate to say it in public.


I am sure you are aware then of the importance of the throat, and spoken word, yes? It is said that in the beginning all of creation was spoken into existence. The voice, through which he articulate our thoughts, and manifest it into reality, is being under attack currently. I highly suspect this is why the Iodide deficiency exists as it does today. Been planning to write a thread about this subject.

Originally posted by LUXUS
reply to post by network dude

Originally posted by VeritasAequitas
reply to post by LUXUS


I am sure you are aware then of the importance of the throat, and spoken word, yes? It is said that in the beginning all of creation was spoken into existence. The voice, through which he articulate our thoughts, and manifest it into reality, is being under attack currently. I highly suspect this is why the Iodide deficiency exists as it does today. Been planning to write a thread about this subject.


There is the macro cosmic word and the microcosmic word, the word that created the universe ie the lagos cannot be uttered by man tho he can experience it ie the ineffable name.

The microcosmic word can be spoken by man and that is the word we are talking about.


Originally posted by LUXUS
reply to post by network dude

Originally given to man by the Elohim according to tradition, lost in modern Freemasonry but said to have survived in India and Tibet


Could it possibly be a variation of Adonai?

Originally posted by VeritasAequitas
reply to post by LUXUS


Could it possibly be a variation of Adonai?

"the Deity appeared to him in the visible shape of a pure golden triangle, and said to him, " Enoch, thou hast longed to know my true name: arise and follow me, and thou shalt know it." 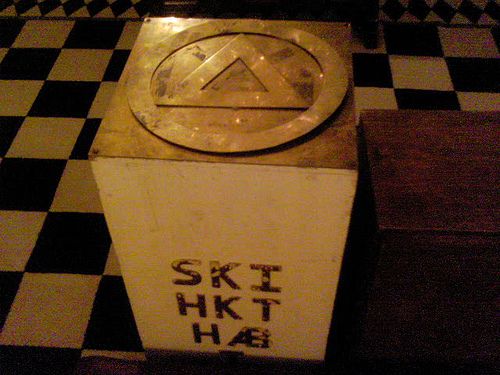 In modern Freemasonry there is a tradition of breaking up this word into 3 pieces each piece associated with one of the sides of a triangle. These however are all substitutes for the lost word which was one of the greatest prizes of masonry and kabbalah teachings.
edit on 14-8-2013 by LUXUS because: (no reason given)


What on Earth are you chating about

It is also forbidden for an initiate to say it in public.

It is forbidden to teach those who ask.

Its a vocalized sound of creating originating from the stomach.

Another sound originating from the stomach can destroy


About the lost work... a job you'd like to have