What Did I See On Hilton Head Island?

posted on Aug, 12 2013 @ 11:23 AM
link
I just got back from a family vacation on Hilton Head Island last week. One night, my wife and I decided to take a stroll on the beach. As we were heading back to the beach access point, I noticed an orange glow in the sky. I stopped to take a good look at it. I can best describe it as a very dimly lit bonfire in the sky. I did not hear sound (other than the crashing waves) and it did not move. Before I could mention it to my wife, it faded away. About a minute later, there it was again, only this time, a little farther away from the first location. This time my wife also witnessed it. Two minutes later, faded away. Again, within a minute it had reappeared in a third location. As before, it slowly faded away after about 2 minutes. We stood and watched for it again, but it never reappeared.

Sadly, I had no camera or cell phone with me. I'm not asking anyone to believe my story. I just wanted to see if anyone could explain what we saw or have a similar experience. We could easily rule out fireworks, flares, Chinese lanterns or aircraft. It was well above water line to be a ship's lights. The best we could explain it was a dim fire just floating in the sky. No noise, no movement other than appearing and disappearing in 3 different locations. I'm stumped.

posted on Aug, 12 2013 @ 11:26 AM
link
Given your description it could have been someone launching Chinese sky lanterns. Those are frequently mistaken for UFOs.


So it was it something like this...but glowing orange?


Not at all. It was not a bright blinking light. It was a fairly large ball of light. Like a mix of orange, red and yellow. It did not pulsate or have a flicker. It was like looking at campfire from about 50 yards away. The only reason I would rule out Chinese lanterns is because of it disappearing and reappearing 3 times and then nothing. Would a lantern light go out and then ignite itself 3 times? I'm not real familiar with the lanterns, but I don't think that's how it works. Another thought would be possibly light from a lighthouse, but why would we see it only 3 times?


Could have been 3 separate lanterns. Once one burns out they would light another. Just speculating based on your description, I really do not know.

That area does has some supernatural folklore.

posted on Aug, 12 2013 @ 11:52 AM
link
Alright, I know I don't have photographic evidence, but I whipped up a quick "sketch" of what it looked like using some google images. 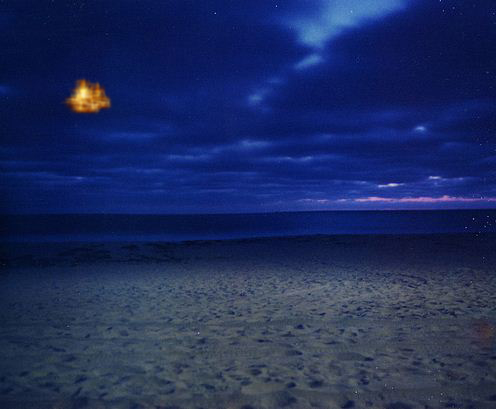 It was overcast much like the photo and a little darker, but you get the idea. The light was flat on the bottom and had a more angled shape at the top. I made the size of the object as it had appeared from where we were standing. It seemed to be fairly large.


Your sketch reminds me of the sprite recently photographed in Oklahoma City, OK on Aug 6th.

Originally posted by jrod
reply to post by jtrenthacker


Could have been 3 separate lanterns. Once one burns out they would light another. Just speculating based on your description, I really do not know.

That area does has some supernatural folklore.

posted on Aug, 12 2013 @ 12:51 PM
link
Interesting...may I suggest you file a report with NUFORC. I always get excited about such fireball sighting's, since I've had a visual encounter with such a fiery-balled foofighter, that is similar to your description. Your sighting might be a red-orange plasma encased alien starship, in it's low power plasma phase --- used for slow speeds as low as 30 mph, landings and takeoffs, offensive and defensive OP's --- and otherwise for use as a perfect camouflage for people who think it is a meteorite, Chinese lanterns, sprites, ball lightning, airliners on fire, etc, etc.

Look-up NUFORC's fireball sighting file. Did anybody else have the same sighting's, including any bluish-white lights going across the night sky at incredible speeds?

posted on Aug, 12 2013 @ 01:13 PM
link
I was on Edisto Island, SC in August of 2012. While I was down there many reports came in of UFO sightings near Myrtle Beach. I never did see anything down on Edisto, but Myrtle was a hot-spot for sightings last summer.

We go every other year and I always have my eyes toward the sky when I'm down there.

posted on Aug, 12 2013 @ 01:30 PM
link
It could very well have been lanterns. I'm not ruling them out. However, it just seemed way too big to be a lantern. Also if somebody sent them up one at a time, I would like to think we would have noticed them as they ascended. This object just appeared out of the night sky. I also made sure to look for any boats out on the water to see if the light was coming from one. It was total darkness unless there was a boat without lights out there. Also, as I said before we did notice any kind of flickering light.

Side note: I thought twice about posting this because one; I don't have any photographic proof and two; I've had a strong interest in ufology since I was a kid, so part of me wonders if my imagination got away from me. I'm glad my wife was there to validate what we saw. After years of interest, this is the first time that I have seen something in the sky that I had no good explanation for. I might be more excited about it than I should be. I appreciate the responses and keep them coming.

It could very well have been lanterns. I'm not ruling them out.


Although to be fair you did rule it out in the OP .

posted on Aug, 12 2013 @ 01:43 PM
link
It could also be a plane on approach, with its landing light on (which can sometimes appear amber-colored). A plane could turn on its landing light 20 miles, 30 miles, or even farther out from the airport. Perhaps they were heading to Savannah's airport.

These planes could be far enough away from you that you do not hear them, but the light is still bright enough to be seen. It is possible that the plane was first heading toward you (hence to appearance of the light being mostly stationary), then turn away from you, which could be the normal approach pattern. It's also possible that when the plane turned away you could no longer see the landing light, and it was too far away to discern the dimmer navigation lights -- which may be why it seemed to disappear.

I say all of this because I once lived in a location where the planes would often look like this on the way to the local airport.


I just filed the report. Thanks for the idea. I looked through there database for South Carolina. Tons of reports of fireballs in the Myrtle Beach area. Thanks.


Yeah you're right. I guess I'm second guessing myself since reading the responses. It still did not look like any of the Chinese lanterns that I have seen video of. I've been scouring youtube for anything that looks like what we saw, but there is too much flickering of the lights for it to be similar. It was like somebody had a gigantic slide projector and projected an image of a fire up into the sky. It was just 'there' and then faded away. There was no movement within the object.


There is a report on MUFON from Hilton Head Island for the 08/07/2013 that sounds similar to yours .


We were fishing on the Beach at Hilton head past sundown. I noticed three orange and bright lights in a triangle, one on top, two on the bottom. They were only there for 10 or 15 seconds. I could see some clouds on the horizon, even above the lights, but the sky was clear and many stars were out. There were 7 of our family who saw the lights. Also some strangers walking on the beach saw them. The lights apeared on and off over a 15 minute period. There were sometimes 1, other times 2 lights. They stayed bright and visible for 10 or 15 seconds. They looked as if they were burning fire. Some of the showings were round, others were more of a horizontal line which started smaller and expanded wider. There were between 6 & 8 different sightings. All were at the same point in the sky. They were further north than the savannah air port by maybe 60 degrees. The sightings were all at the same place in the sky.
www.ufostalker.com...

Is this around the time date wise that you had your sighting ?


Nice find Gortex! Our sighting was on the sixth, just the day before. Although we only saw one object, their description sounds a lot like ours.


Is it possible that what you saw could have been military flares ?
On my scout around I've found that Beaufort Marine Corps Air Station is situated 20 miles from Hilton Head Island , perhaps a military exercise ?
www.beaufort.marines.mil...

You had your sighting on the 6th the report is from the 7th and one of the responses to the report says they saw them on the 9th .


Saw it - Friday night - three bright lights as described above - exactly same conditions as described. Not a star or satellite - too low. Not helicopters - too bright and flashes were too far apart too fast. Not a ship - too high and too bright for ten miles plus off-shore on horizon. Definitely a UFO

edit to add: Already stated in a previous post. My appologies.
edit on 8/12/2013 by Tunatarian because: (no reason given)