The Sea Monkey and I [AAC]

posted on Aug, 12 2013 @ 09:41 AM
link
Right, well it had been three weeks since i'd ordered my Sea Monkeys, anticipation of their arrival had turned into deep frustration, so time to do something about it i thought, and here i was on the phone to the mail ordering company, a voice answered;

"Good morning, you have reached Transcience Corporation, this is Frank speaking, how may i help?"

"Oh hello, what it is i ordered some Sea Monkeys like three weeks ago and they still haven't arrived, so what's going on?"

"Ah i see, well i'm afraid Madame that we've had something of a disaster around these parts, the roof of our warehouse came off in a terrible storm, the rain came in, and in short our entire stock was destroyed, so your order cannot be proccessed."

"What you mean ever?"

"Sadly yes, we await insurance compensation, but will then be venturing into other areas of enterprise, a full refund will be arranged for you"

"But i really wanted the Sea Monkeys, you know, like really really..."

"Well perhaps there is a way i can help, this business was founded by my Late Grandfather following an expedition to China in the 1920's, he recounted a tale of discovering a cave in a remote region of Shanxi Province, filled with many curious artifacts of a long bygone age, but also within the cave he discovered strange eggs, for want of a better description, and these were his inspiration for setting up the Sea Monkey business. We still have one remaining in a display case, within the boardroom, as we are liquidating all assets, i see no reason you shouldn't have it"

"Oh wow, i mean that just sounds fantastic, thanks a lot!"

"You're welcome Madame and glad i could be of assistance, i'll take your details if i may..." 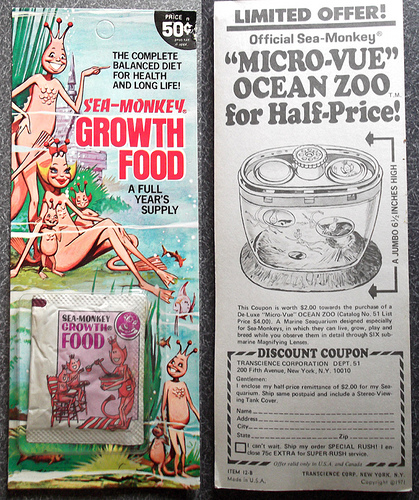 So that was that then, and eager anticipation was back on the menu for all the following week, until finally the Postal Service made delivery of the parcel, which i signed for at the door, and then rushed into the living room to unwrap.

Removing the brown outer paper, and opening the cardboard box, and removing the foam padding, and opening the glass case within, i finally laid my hands upon what was indeed a kind of weird egg, about the same size that you get at Easter made of chocolate if you're lucky, except this one was made of a very fine white crystaline substance, that glistened and shimmered in the light.

So what to do with it, i held it within my hands and pondered.

It would make a lovely ornament on the mantlepiece, but i wanted Sea Monkeys and this was supposed to be about them, so maybe put it in water, except the tank i'd bought was not much bigger than the egg, so i couldn't put it in there, and i didn't want to buy a larger one only for nothing to happen as this wasn't exactly as advertised, so i decided my best option was to fill the bath with water and put it in there.


So the egg is in the bath half filled with tepid water and a little added table salt, and i'm looking at it and nothing much is happening, i splash the water around some and still nothing happens, but at least it hasn't turned to mush and the mantlepiece ornament option is looking increasingly likely, but i decide to leave it and give it time, though with little optimism.


I checked on it a couple of times over the course of the day, but there was never any sign of change, until finally i took myself off to bed. 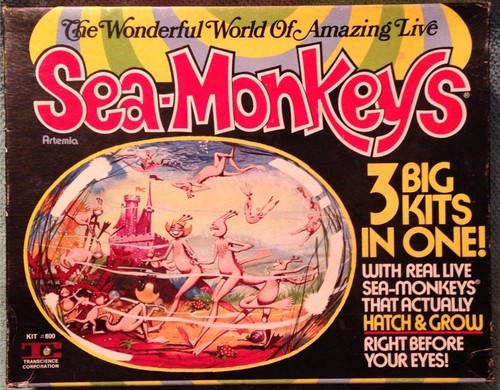 In the morning i awoke early as the Mid-summer sunshine was already warm and glowing through the window, drowsily emerged from the sheets and stumbled off into the bathroom, went over to the sink and began to reach for the tooth brush, when of a sudden a movement from behind half catches my eye and i freeze, only slowly turning my head to see what caught my attention from within the bath...


And there it was, an actual Sea Monkey swimming around in my bath looking exactly as illustrated on the packaging, cute and pink, with skinny arms and legs, webbed feet and three little pointy things on its head, and it began to make funny kind of squeaky noises as it looked at me and smiled.

I began to talk to it, it continued to squeak, i sort of apologized for leaving it in the bath overnight unattended and that i hoped the water wasn't too cold and sorry there was nothing to eat and in general i simply hadn't realised this, that, and the other, but it didn't seem to mind and just kept smiling until lifting it's arms as if for me to lift out of the bath, which with some trepidation i did, stood it on the floor and sort of dabbed at it with towels.

Thinking about it i decided "it" was a boy, as on the packaging the females had bigger pointy ears, and mine didn't, he stood about eighteen inches tall, his skin felt sort of rubbery, and his tall swished from side to side when he seemed excited, which was pretty much all the time.


So anyway I decided to call him Pinky, it was still early in the morning and that was the best i could come up with...


As i went around the house doing my early morning chores Pinky was following me everywhere, jumping around and squeaking, doing crazy somersaults to show off. I poured myself some breakfast cereal and sat down on the sofa to watch the news on the television, Pinky jumped up and sat right there beside me, and then began to look at my bowl with pleading eyes.

"What you want some cereal, well alright then let's see how that one goes..."

So i went and fetched him his own little bowl of munchies and milk, which he got through rapidly, when finished he offered me back the bowl, which i took off him with a smile and said "thankyou", to which Pinky replied,

Oh and he wanted more.


There are two things that can be generally said about Pinky, that he eats anything and everything and grew rapidly, reaching around five foot tall in just under two weeks, and that he is into anything and everything, had grasped the basics of English on his first day of arrival into this world,and was spending hours online researching ancient history and myths.

I loved having him around the place, but i didn't tell anyone else he was here as i was afraid they might want to put him into a zoo or experiment on him or something, so he'd mess around online while i went out to work, and in the evenings we'd sit down and watch television together, or maybe put some music on and i'd teach Pinky a few dancing moves, which he'd quickly pick up and then somewhat over elaborate on.

One day he sat me down for a chat.

"You know i'm not really a Sea Monkey right..?"

"According to what i have been able to learn online, my kind arrived here many thousands of years ago, we came from the Pleiades with a mission to instruct mankind, in ancient Sumeria we were known as the Apkallu, or the Seven Sages that emerged from the waters, and there are similar traditions from China, though it seems something untoward may have happened there, and hence my non-emergence from the stasis pod"

"Hmmm, well i wouldn't believe everything you read online."

posted on Aug, 12 2013 @ 09:42 AM
link
"Well such is my considered evaluation of my predicament, it appears the mission has somewhat passed me by as your technological achievements are now of a high standard, and thus i am somewhat surplus to requirements as regards the mission, and need further instruction."

"You're not surplus in anyway, i love having you around the place..."

"And i love being here, but i must attempt contact with my own kind." 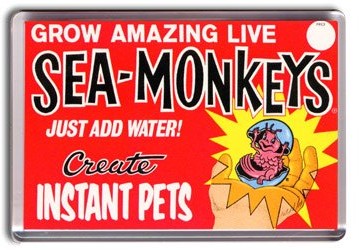 In the weeks that followed Pinky had me ordering all sorts of weird electronic junk off the internet, most of it second hand as that was all i could afford, he helped out around the house with the chores to make up for putting me out so, but i became increasingly sad that it seemed he could leave, and we were spending less time doing things together as he worked on his contraption, as i called it.


Finally he finished constructing his astonishing device, which filled up most of the spare bedroom, it had wires and antennae sticking out here, there, and everywhere, and when he turned it on it made a deep humming sound and lights flashed on and off, with somewhere in the middle of it my computer system.

I was deeply impressed though a little concerned about my future electric bill, especially as Pinky was tinkering with it all hours of the night, fine tuning and adjusting, but eventually Pinky made contact...don't ask me how.


As he tapped away on the keyboard interface, a strange series of symbols began to appear on the monitor as sent from his homeworld, he engaged in this activity for many hours without pause, catching up on the gossip i guess, i sat and watched, forgotten in the corner.

When transmission had ended he explained to me that they would be able to pick him up within several days, again, don't ask me how, that he would return to his homeworld, and how he was really looking forward to the adventures ahead, i told him,

And it really was i suppose. 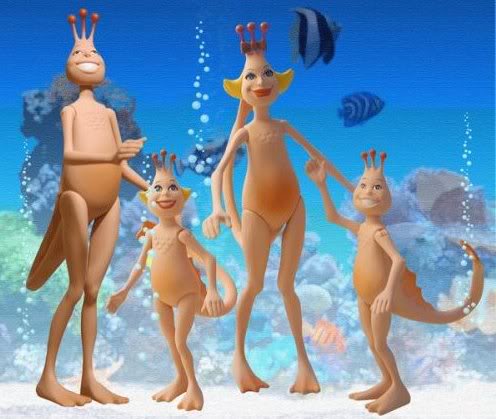 So cometh the day and cometh the hour, and Pinky is pacing around the living room in anticipation, tail swishing away, and i'm asking if he'd like a packed lunch to take with him and worrying about the space ship being shot down and how will they park the thing and find the right house and such forth, and then he turns to me...

And then it's time for me to start crying and saying i don't want him to leave and that he's the best friend i've ever had and that i love him and will really really miss him.

"Please close your eyes, i will leave you with something..."


And so i'm stood in front of Pinky and i close my eyes, he puts his hand upon my forehead, and at that moment my mind is filled with wonderment and joy which surges throughout my entire body, i sense his thoughts and his love and appreciation toward me, i see his vision of past, present and future, i feel his Oneness with all living things, he releases his touch, i open my eyes, and Pinky is gone.


In the days that followed i dismantled and tidied up all his junk, i bought a goldfish to put in the little fish tank i had purchased for the Sea Monkeys, and returned to the way things had been before the arrival of Pinky...well sort of.

Great writing, humorous and suspenseful at the same time.

Will Pinky ever return?


Yes i'm quite sure Pinky will return when it's time to take things to the next level...