KANSAS CITY, Mo. (AP) — A clown wearing a President Obama mask appeared at a Missouri State Fair rodeo this weekend and the announcer asked the enthusiastic spectators if they wanted to see "Obama run down by a bull."

The antics led the state's second highest-ranking official, Lt. Gov. Peter Kinder, to denounce the performance in a tweet Sunday. He said it was "disrespectful" to the president. "We are better than this," the Republican tweeted.

State Fair officials said the show was "inappropriate" and "does not reflect the opinions or standards" of the fair. "We strive to be a family friendly event and regret that Saturday's rodeo badly missed that mark," they said in a statement Sunday.

According to witnesses, when asked if they wanted to see Obama chased by a bull, "everybody screamed" and "just went wild" as the announcer talked about having the bull run down the clown with the Obama mask.


Yeah this is tacky and in very poor judgement, and maybe found offensive by some, but not illegal.
It was stated that they weren't sure if any charges would be taken against the performers.
Why should there be? Rodeo clowns are there to entertain as well as protect the bull riders when thrown off a bull.
Besides, no rodeo clown is going to intentionally get mauled by a bull.
It was just for fun and laughs.

Officials with the Missouri Rodeo Cowboy Association, the organization that coordinated the rodeo, did not return phone calls seeking comment Sunday.

Every president has had fun made of them in one shape or form.
Even Game of Thrones used an old Bush head when they had Ned Stark's head on a stake.

All political figures are fair game IMO.
Should have had one of Pelosi and Reed too while they were at it.

Then another night, have McCain and Boehner.
Just to be 'fair and balanced'.


He must have been really pxxxx at Patrick Swayze and Keanu Reeves......... 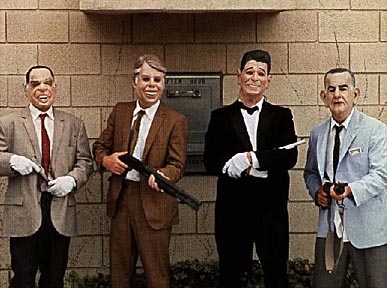 Originally posted by sonnny1
reply to post by snarky412


He must have been really pxxxx at Patrick Swayze and Keanu Reeves.........

At least he wasn't playing Cowboy Poker.
He might have taken a hit then.

posted on Aug, 11 2013 @ 11:55 PM
link
People get easily offended about trivial things. This story could easily be forgotten tomorrow and President Obama would even find it funny.

posted on Aug, 11 2013 @ 11:59 PM
link
Oh give me a break already. It's not any worse than any Reagan mask was. Teacup nation, yup, because people crumble over the tiniest damn things now.

Originally posted by Nyiah
Oh give me a break already. It's not any worse than any Reagan mask was. Teacup nation, yup, because people crumble over the tiniest damn things now.


People have forgotten what humor is any more.
And for some reason, with Obama, people are extra touchy.
[not so much with Obama himself.....unless it's about his "phony" scandals. Then he gets upset. ]


Me thinks people take politics a little too serious some times.

I agree op it's a little tacky but give me a break it's a rodeo what do you expect?

I don't see how they can arrest the guy what would the charge be impersonating the president?

Originally posted by gotya
reply to post by snarky412

I agree op it's a little tacky but give me a break it's a rodeo what do you expect?

I don't see how they can arrest the guy what would the charge be impersonating the president?


We used to work the rodeo circuit years ago and that's what the clowns do, make people laugh.
[aside from putting their life on the line to save the riders]

They're the 'comic relief ' so to speak.

Now to have to worry about being arrested or fined for making fun of some one?
That's just ludicrous.

Relax people and enjoy the show.... no different than what they do on Saturday Night Live.
Except SNL does it ALL the time to every one, especially Rep.

After all, Obama has been impersonating a clown for five years now.

posted on Aug, 12 2013 @ 01:26 AM
link
I think it was funny in how little had been said...right before the announcer removed all question that the scene was suggesting violence to the President. Err.. oops... It's just as illegal for an M.C. at a rodeo as it is for a blogger somewhere. That's where I think it lost humor right into bad taste.

The clown doing it? Yeah.. that's funny and fitting for just how little use we all have for Obama in this part of the nation. To say he's not politically popular would be a severe understatement, I'd think. Still....advocating violence isn't cute, IMO. Not against Limbaugh or Beck or Obama. On general principle, they're all public figures and Kinder gets it right as far as I'm concerned.

We ought to be above that.


Yeah, it's high time we bring some class back to the rodeo.

posted on Aug, 12 2013 @ 02:26 AM
link
Just so you know, one of the clowns was bobbling Obama's lips. Whoopsie, that one may have been a bit too far over the top. Otherwise it was funny. Anyways here is the video.

Start at around 35 seconds.


Anti-violence advocates are coming out against a game promoted by a Republican super PAC that allows users to virtually ‘slap’ Hillary Clinton.

“Violence against women is not a joke,” Ultra Violet, a group that aims to fight sexism and expand women's rights, wrote on its petition to have the game removed. “It's disgusting, it's outrageous and -- regardless of where you fall on the political spectrum -- it has no place in our politics.”

The hag Nancy Pelosi had to get in on the issue as well:


“‘Slap Hillary’ site isn’t a game, it isn’t funny. Like all violence against women, it’s sick. GOP needs to grow up and take this site down,” Pelosi tweeted on Friday, according to examiner.com. For one of the very few times in her public life, Pelosi told the truth.

The “Slap Hillary” game really isn’t all that funny, and it’s not a game per se, since there’s no score or goal involved. (The “Slap Sarah” game, on the other hand, actually rewards players who “slap” Palin harder, literally encouraging the violence against women Pelosi claims to abhor.) However, the game was not produced by the Republican Party, it was put up by an independent group called The Hillary Project, so Pelosi’s talking to the wrong people.

If you want to slap these people around visithere.

posted on Aug, 12 2013 @ 05:44 AM
link
I suppose it's one thing to put a picture of someone you dislike on a board and throw darts at it, another to fire a few rounds off at said offending image, and then another entirely to get someone to dress up as your target of hate and have them chased by a bull... in front of an audience, and not just for your own pleasure.


And then another to mock conservative objects of hate, like Palin, Bush, etc., on national television, in SNL skits. Mind you, I don't like either one of them, but it is sickeningly despicable to cheer the one, while chastising the other.

Originally posted by Nyiah
Oh give me a break already. It's not any worse than any Reagan mask was. Teacup nation, yup, because people crumble over the tiniest damn things now.

The difference with this president should be painfully obvious. RACE.

No matter what people do or say, even fair criticism, if they are white, conservative or opposed to this president, satire, parody or just having fun with his image... It must be racially motivated.

President Obama got where he is by playing on white guilt, works well with liberals.. It empowers and enables him also protects him in ways that would never happen for a white president.

posted on Aug, 12 2013 @ 03:50 PM
link
They should have stuck masks of politicians on every bull's ass considering the level of bullcrap each of them spew on a daily basis. Comparing this president to a clown is offensive... to clowns.