Found these pictures online (link below) and just wondering on the credibility on them, i.e. have you seen them before? Back story? Are they edited etc. I know people on here will have more of an idea of the Rothschilds than me hence why I'm posting here as I'd like to know a little more. I'm sort of sitting on the fence about believing the NWO/Illuminati thing, after about 2-3 years of reading the odds and sods about things I do want to sort of believe it but of course the old 'common sense' steps in, but who's to say what's right and wrong?

I already know they own or did own a large percentage of the worlds currency and money, that they started the banking system and that they own a lot of the worlds current wealth, but I feel I read from the wrong sources which don't have enough insight for me. I've also read they're linked in with the NWO, illuminati etc. and also read (and printed off) a thread on here which apparently a member of an elite family answered questions (Hidden Hands?) which was very insightful on the Illuminati as a group and the NWO as a whole.

Sorry if the pictures are too big or whatever, they're straight from the site and not sure how to embed


(Pics from this link: www.evilyoshida.com... )

Thanks in advanced,
Connor

posted on Aug, 11 2013 @ 06:38 PM
link
Eyes Wide Shut in real life.. don't know how credible these pictures are but they sure are interesting and creepy.

I'm hoping someone here has a lot more insight into this than I do..
maybe we have a real life "Dr. William Harford"(Tom Cruise's character) among us.


Well that forth picture with the oh so cool costumes is the Duke and Duchess of Cadaval.
That's about all I can tell you.

I have no idea on the Rothschilds other than pretty much what you already stated.
Perhaps someone else will know more about them. 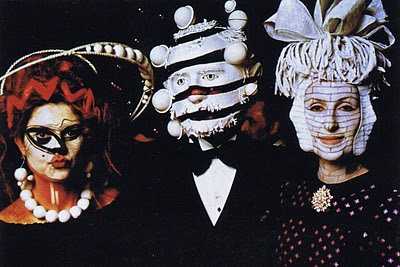 Not sure who is who...lol

All these pictures came from here:
Real life is elsewhere

on 12 december 1972, marie-hélène de rothschild gave her surrealist ball at ferriéres. this time the guests were asked to come in black tie & long dresses with surrealist heads. the invitation was printed with reversed writing on a blue & cloudy sky, inspired by a painting by magritte. to decipher the card, it had to be held to a mirror. for the evening the chateau was floodlit with moving orange lights to give the impression that it was on fire. the staircase inside was lined by footmen dressed as cats that appeared to have fallen asleep in a variety of staged poses. guests had to pass through a kind of labyrinth of hell, made of black ribbons to look like cobwebs. the occasional cat appeared to rescue the guests & lead them to the tapestry salon. here they were greeted by guy with a hat to resemble a still-life on a platter, & by marie-hélène wearing the head of a giant stag weeping tears made of diamonds.

marie-hélène proved that she had the flare & imagination to create something unique & worthwhile. none of this was created by charm alone. it needed a degree of ruthless determination. she attended to every minute detail of style in her life & also in her entertaining. she was a great hostess with all the qualities. she loved parties & people. she was forever in quest of new talent & new figures to entertain from the world of the arts, literature, dance & haute couture. she mixed them with the more established set of paris society. everyone was intrigued. marie-hélène's parties took on such importance that one social figure threatened to commit suicide unless she was invited.


Thanks for that DarkBlade, that is very interesting! in fact the picture was saved with 'Duke and Duchess of Cadaval' in the file name, hopefully someone will have more insight on the whole 'Illuminati' side of things, I've since read a lot how they're satanists and rituals are a norm in their family, kinda weird if it were true as they do own most of the wealth and therefore run the place!

Are all parties with some interesting fancy dresses now to be branded as "Rothschild" or "secret society" or some such.