ALBANY, N.Y. — More than 600 National Guard troops and airmen from New York and New Jersey are descending on Westchester County through Sunday for massive training on a mock train derailment.

Gov. Andrew Cuomo is warning passing motorists Thursday through Sunday that this is only a drill.

The troops will be reacting to a fake chemical spill at the Westchester County Fire Training Center and nearby Camp Smith, which is used by the National Guard.

Cuomo says troops will be wearing hazardous materials suits and searching for "victims" of a mock spill that would threaten communities.

The drill includes more than 400 New York soldiers and airmen and another 200 National Guard troops from New Jersey.


It looks like recent rail disasters are influencing places like the U.S. to have a set response plan should a similar situation present itself. - Better to be safe than sorry, I guess.


Members from several local agencies across the Capital District participated in a coordinated National Disaster Medical System Exercise on Aug. 8 and 9 at Stratton Air National Guard Base, Schenectady, N.Y.

The agencies consisted of members from the 109th Airlift Wing, 139th Aeromedical Evacuation Squadron, the Albany Stratton Veterans Affairs Medical Center, the Federal Emergency Management Agency, the National Disaster Medical System, the Civil Air Patrol and the Alplaus Volunteer Fire Department. During this exercise, patients were stabilized for transport, loaded onto a LC-130 Hercules and evacuated by members of the 139AES, who were sharpening their skills for an actual medical evacuation. 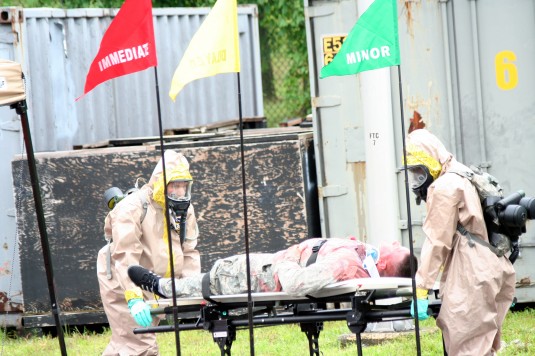 New York Army National Guard Soldiers from the decontamination element of the Chemical Biological Radiological and Nuclear enterprise prepare a simulated casualty for decontamination during a disaster response exercise here Aug. 9 at the Westchester County Fire Training Center. The CBRN Enterprise part of the Homeland Response Force Region II trained here this week to prepare its Soldiers and Airmen to extract casualties from a contaminated incident provide decontamination to both ambulatory and litter patients and conduct medical triage to assist civil authorities. The decon element is supported by the New York Army National Guards 222nd Chemical Company based at Fort Hamilton N.Y.