posted on Aug, 10 2013 @ 09:40 AM
link
I've heard today, from a fellow coworker, that there is some strange news floating around here. A possible terrorist attack on Austin leaked out accidentally?

Here are the links provided to me

Threat Letter Was Sent Out By Mistake

AUSTIN (KXAN) - Texas Military Forces says a memo its commanders received about a potential terror threat in Austin was sent out by mistake.

The force protection alert outlines what it refers to as unconfirmed reports from the Department of Homeland Security about a potential terror attack in Austin sometime Thursday or Friday.

After contacting the Texas Military Forces Headquarters, KXAN was told the internal memo was not intended for public release.

But somehow it was leaked. The news got wind of it and it started to spread.


Greg Lane works in an office on 6th St. and told KXAN some of his colleagues and friends were startled by the memo they found while browsing social media sites.

"It makes you wonder," he said. "You saw what happened in Boston. Who would have thought two guys would detonate bombs at the Boston Marathon? To me that was out of left field. It seems like anything is possible this day and age. But you never think it’s going to happen in your neck of the woods."


And here is another look, a bit deeper, with more information.


It is being reported by multiple sources that DHS and various agencies in Texas law enforcement, as well as the FBI, are carrying out a Homeland Security Training Operation in Austin, Texas, over the next few weeks (yes, weeks, you did not misread) and if the length of this operation was not disturbing and suspicious enough, a trusted source has told me that there is the same kind of operation being carried out in Pasadena, California.

Why those two areas are the main launching points is not known, however it is also being reported that there are other cities involved in weeks long Homeland Security Operations like this throughout the country, though that has not been confirmed by me. 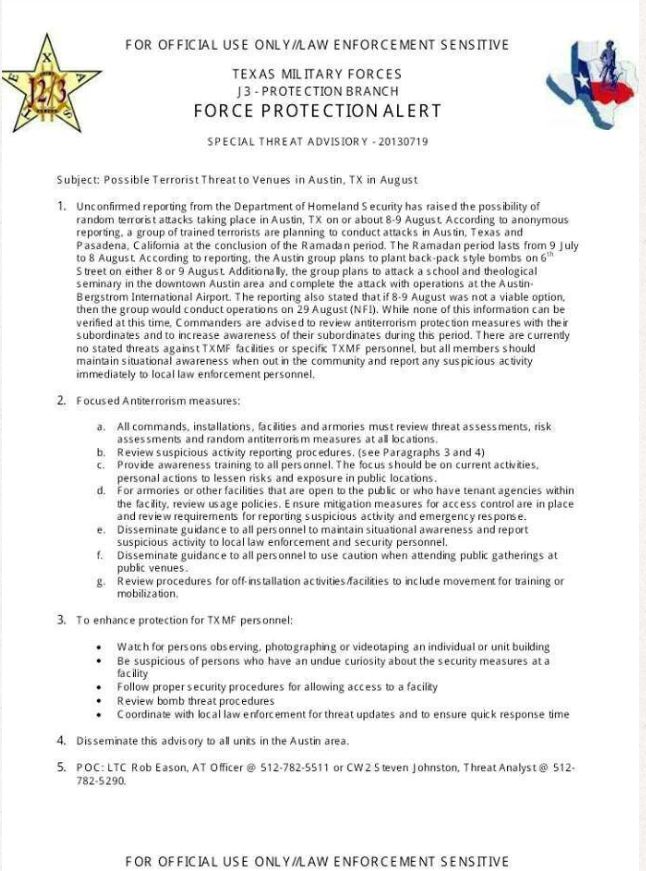 Black Ops? Mass Drill? What the sam hell is going on around here?

This has me a little on edge as I'm right here in Austin. The first page mentioned Thursday and Friday. I guess nothing happened.. BUT WHY am I JUST hearing about this?
Maybe it's just BS

This article was posted the day before. Maybe they are related??

And then there is this. Local and federal agencies investigate downtown threat

And this.APD moving officers downtown from other areas


It's a little odd that all these things are happening at once.
edit on 10-8-2013 by DeepVisions because: (no reason given)

Seriously though, BE ALERT!!!

posted on Aug, 10 2013 @ 10:12 AM
link
Since when did Texas have a Military command that was independent and State specific to the level of writing letter head and referencing that way in public? I've never heard of such a thing as they talk about here.

"Texas Military Forces" "J-3 Protection Branch"? Huh??? Has someone been watching too many movies in writing that document or has Gov. Perry gone a little funny and actually made his own State standing army? It's just weird... National Guard, yes? That reference? say huh...??

Mission: Provide the Governor and the President with ready forces in support of state and federal authorities at home and abroad.

Vision: America's premier state military organization comprised of professional mission-ready forces, fully engaged with our communities, and relevant through and beyond 2035.


Well thank you and I mean that. I had literally never heard of the combined Texas National Guard branches being referred to as the Texas Military. If Rhode Island or Vermont did that, it would be a rightful source of amusement and even a chuckle or two. Texas? Well..They're big enough for it to carry more than one meaning if they ever choose it. Interesting...and learn something every day!


Where did this Document Originate from? Do you know ?

And the Texas Military Forces are a real State Defense Protection Asset of their State Government. It's almost like the State of California Military Department or the known as the California State Military Reserve basically comprised of former and most of Special Forces operator, Navy Seals, Doctors, JAGS, High Ranking Government and Law Enforcement Official. The California Military Department has been known to run Black Bag or Run on operations where law enforcement couldn't impose due to structures in Laws. Its quite fascinating when you start actually seeing who they are really composed of, and what they are not. They say the are non paid, volunteers but that is not the case they are paid, almost mostly in SRP, Special Active duty and SOP payment type forms.

The Texas Military Forces is the three-branch military of the U.S. state of Texas. It is composed of the Texas Army National Guard, the Texas Air National Guard, and the Texas State Guard. All three branches are administered by the state adjutant general, an appointee of the Texas governor, and fall under the command of the governor.

The Texas military was first established by Stephen F. Austin on February 18, 1823, under the authorization of the emperor of Mexico, Agustín de Iturbide, who directed Austin "to organize the colonists into a body of the national militia, to preserve tranquility," as well as to make war on Indian tribes who were hostile to newly established Texas settlements.

All of the Texan militias would come under the command of Sam Houston during the Texas War of Independence between Texas and Mexico beginning in 1835 and ending in 1836 after Texas secured its independence to become the new nation of the Republic of Texas. From 1836 to 1845, the Texas militias fell under the command of the president of the Republic of Texas.

After Texas became the 28th US state in 1845, the state military and its various branches have fallen under the command of the Texas governor. Contents


I was scratching my head at first too...

I guess there really is some meaning to that phrase..

posted on Aug, 10 2013 @ 11:25 AM
link
If this is a real threat I would imagine the Dell compound, complete with a jewish seminary of sorts is on high alert.

The Guv should call in the Texas Rangers so they can track down the dirty dogs before they cause any damage and show them how Texas deals with their kind.
edit on 8/10/2013 by seentoomuch because: (no reason given)


I am currently following SSG Joe Biggs Tweets (friend of journalist Michael Hastings who disappeared under mysterious circumstances in a fiery car crash June 18). I remembered him tweeting about going to Austin and now this tweet has disappeared... hmmmh.

Right now if you NSA, uhm sorry, if you google site:twitter.com... austin it will still give you this:

Not sure it means anything, just thought I'd throw this in...

On the other hand - Still in "Justifying the Surveillance-State" mode...
"Yeah - we're spying on stuff that happens in the U.S.A., but we're not spying on Americans..."
...Uh-huh

Close 21 U.S. Embassies...
Restrict (place severe cautions & warnings on) foreign travel as a result of - "the greatest and most credible terror threat...since 9/11"...

Oh!!! Here's an "accidental leak" of a confidential memo that details one such threat (at least)...

IMO - this is manipulation in its most vulgar form.

My question -- They are apparently trying to warm the climate (put the populace closer to the edges of their seats/chairs)...
Why?
Are they about to pull the chairs out from under us?
What are they gearing toward?
Or - is it just what was stated above -- "justifying the surveillance-state"?

posted on Aug, 10 2013 @ 01:09 PM
link
reply to post by theRhenn
If terrorists were going to attack Texas they would attack the southeast corner of the state where the major ports and refineries are. The ports in Houston, Beaumont and Pt. Arthur is where the majority og military equipment is shipped in and out of Texas for Fort Hood in TX and Fort Polk in LA, and the majority of oil and chemical refineries as well as major pipelines are in the SE part of Texas too. Attacking Austin does nothing but wipe out the largest group of organized liberals in Texas.....hmmmmmm, false flag by Rick Perry maybe?


lol Yeah it's crazy. I've never seen so many liberals in one place, to be honest. They say keep Austin weird... I believe it. I've never been in a bar where ALL of the patrons are smoking joints like beer drinkers in any other bar on 6th street. It's crazy here. I love it though. They have hippie festivals here, ganja festivals... and the music scene is beautiful with such a mixture of everything! I'm not a lib by any means, but more of a libertarian, but I have to say... This city is beautiful. I hope no one comes and messes that up for me. It took me over 40 years to find such a place... I'll break teeth to keep it!

Originally posted by littled16
...If terrorists were going to attack Texas they would attack the southeast corner of the state where the major ports and refineries are.
...Attacking Austin does nothing...


That is...unless they are good terrorists...intent on wiping out the IRS facilities in Austin...
Good Terrorists - who would have thunk it?

Why they always pickin on Austin, TX?

posted on Aug, 10 2013 @ 02:44 PM
link
Why wouldnt they want the public to know? Thats the kind of alert i would want to get. More eyes watching is better for everyone, no? Smells funky.