How the Koch Bros and Big Tobacco started the Tea Party

A new academic study confirms that front groups with longstanding ties to the tobacco industry and the billionaire Koch brothers planned the formation of the Tea Party movement more than a decade before it exploded onto the U.S. political scene.

The Tea Party was started in 2002 by a group called Citizens for a Sound Economy.

Citizens for a Sound Economy (CSE) was a powerful industry-funded think tank, promoting deregulation. It was founded by Koch Industries interests and continues to maintain strong links. In 2003, an internal rift between CSE and its affiliated Citizens for a Sound Economy Foundation led to a split in which CSEF was renamed as a separate organization, called Americans For Prosperity.


Citizens for a Sound Economy

Here is the opening page from the website, which now resides in the archive. (Notice the date?) 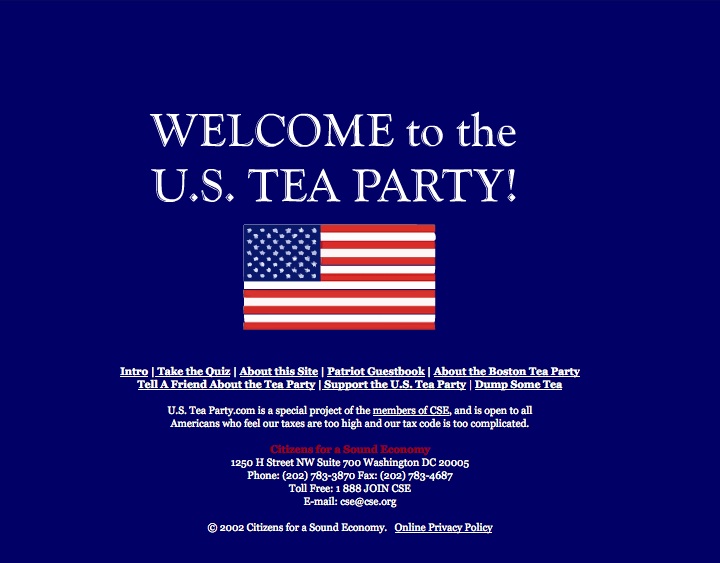 But why would they start such an organization?

The study, funded by the National Cancer Institute of the National Institute of Health, traces the roots of the Tea Party's anti-tax movement back to the early 1980s when tobacco companies began to invest in third party groups to fight excise taxes on cigarettes, as well as health studies finding a link between cancer and secondhand cigarette smoke.

That explains Tobacco companies, but what about the Kochs?

Many of the anti-science operatives who defended cigarettes are currently deploying their tobacco-inspired playbook internationally to evade accountability for the fossil fuel industry's role in driving climate disruption.

In the words of the Study's conclusion.


Rather than being a purely grassroots movement that spontaneously developed in 2009, the Tea Party has developed over time, in part through decades of work by the tobacco industry and other corporate interests. It is important for tobacco control advocates in the USA and internationally, to anticipate and counter Tea Party opposition to tobacco control policies and ensure that policymakers, the media and the public understand the longstanding connection between the tobacco industry, the Tea Party and its associated organisations.


‘To quarterback behind the scenes, third-party efforts’: the tobacco industry and the Tea Party

On October 25, work began among Ron Paul's supporters to commemorate the anniversary of the Boston Tea Party, starting with the Web-site TeaParty07.com. In support of the rally, Paul supporters purchased a blimp to display campaign messages to observers. On December 16, 2007, Ron Paul supporters re-enacted the dumping of tea into Boston Harbor by tossing banners that read "Tyranny" and "no taxation without representation" into boxes that were in the harbor. Ron Paul supporters also gathered in several other cities as part of the Tea Party re-enactment, including Strasbourg, France, Santa Monica, California, Maui, Hawaii, and Freeport and Austin, Texas. Paul himself tossed a barrel labelled "Iraq War" overboard at the Tea Party Re-enactment in Freeport, Texas. The Austin Police Department estimates 2000 to 3000 attendees at the Austin Tea Party.


Many people have re-enacted this.


Thought it was Paul too guess the only good billionaires, are the Soros kind pushing political agendas.


The common public understanding of the origins of the Tea Party is that it is a popular grassroots uprising that began with anti-tax protests in 2009. However, the Quarterback study reveals that in 2002, the Kochs and tobacco-backed CSE designed and made public the first Tea Party Movement website under the web address www.usteaparty.com.


Well, you have all these "Billionaires" with their Agendas. Then you have the "Millionaires" running this Government.


A tea party Website means that the modern day Tea Party Movement was designed by the Koch Brothers?

How the Koch Bros and Big Tobacco started the Tea Party


BTW David Koch has donated over 2 million dollars to democrats.

If BIG tobacco is bad, is SMALL tobacco good?
edit on 9-8-2013 by Carreau because: (no reason given)


You'd have thought Band-Aid would be involved too.

All those scraped knees from the Astro Turf.


Are you suggesting the Tea Party today are the same people as the 18th Century? I know Baby Boomers are getting older but....


What a well researched thread.

Lots of HuffPo articles. It must be true!

Wait, isn't this the same HuffPo that uses the Drudge Report to drive her own rating?


Yes, because Lord knows anyone who detests the socialist direction this country is trending towards and is sick and tired of having a sore ass from getting rolled by the IRS every year is clearly being manipulated by the Kochs and (Oh my God, look!!! What's that?!?!?!) BIG TOBACCO.

Simple truth: The more the left lambasts, mocks, and disparages the Tea Party, the stronger our resolve about the necessity of having the Tea Party will become. The mere fact that it clearly scares the hell out of the leftists as badly as it does shows that it is a clear threat to an agenda... which is what the movement was about all along, stopping the agenda of the middle class bankrolling the rest of this hellhole of a nation.

Next thing you know it, they'll be calling Tea Partiers racist....

Oops, I guess they already did. It's the only thing they can fall back on. No proof or anything...not that they need it. Just as long as they believe it.

Originally posted by TDawgRex
Oops, I guess they already did. It's the only thing they can fall back on. No proof or anything...not that they need it. Just as long as they believe it.

Thank Jesus none of the haters have ever attended our Taxed Enough Already weekly "Eat a baby Thursday night jamborees" or the annual "Elderly Pinata Fiesta" event at the local nursing home. Imagine their venom!


Which "Tea Party" group(s) are we talking about ?

There's a lot of them it seems, all with different names.

Many have been hijacked for specific agendas.


Many of the same politicians speak at rallies sponsored by different groups that are probably 'legitimate'.

Many have the same or similar issues, but many have been infiltrated, and have different agendas.


OP is lumping ALL of them into a Koch Bros soup.


you do realise the right wing guys will not believe you,
even with the financial records and meeting minutes.

these "think tanks" looked at how to "whip up" populism and direct it from behind the scenes,
ever notice the top down structure of the tea party?

there is no bottom up control, or renewable energy, or the environment or labelling GMO s would have become a major issue.

in fact most of their top down directives only serve a few big powerful industries.

it is a best a PR campaign and at worst a cy-op for big tabbacco and oil.

there is little point in pointing this out mind you because it will be seen as a political attack,
not exposing a truth

at least this thread asks some tough questions

...so sad how even the Sincere Disgruntlement is being canalized and Led...

Originally posted by XPLodER
reply to post by BritofTexas


you do realise the right wing guys will not believe you,
even with the financial records and meeting minutes.


Can you provide proof of these allegations? Most Conservatives actually think for themselves rather than accepting what the internet tells them.

these "think tanks" looked at how to "whip up" populism and direct it from behind the scenes,
ever notice the top down structure of the tea party?

there is no bottom up control, or renewable energy, or the environment or labelling GMO s would have become a major issue.

These are none issues. We as a people have a bigger problem than those simpleton agendas.

in fact most of their top down directives only serve a few big powerful industries.

it is a best a PR campaign and at worst a cy-op for big tabbacco and oil.

So you're anti-business. I take it you don't own nor run one. Let me clue you in. If you have a business, the main goal is to make a profit. Nothing more, nothing less.

at least this thread asks some tough questions

And what questions would those be?


What a load of crap.

posted on Aug, 9 2013 @ 03:59 PM
link
I think the Koch's did hijack a faction of the Tea Party, maybe even planted the seeds long ago... but there's also a faction that truly is grassroots and while I may agree with little they espouse, they have been found to be immune to co-opting and I admire that.

For many months now, your colleagues in the Democratic Senatorial Campaign Committee leadership have engaged in a series of disparagements and ad hominem attacks about us, apparently as part of a concerted political and fundraising strategy. Just recently, Senator Reid wrote in a DSCC fundraising letter that Republicans are trying to “force through their extreme agenda faster than you can say ‘Koch Brothers.’”

So you can imagine my chagrin when I got a letter from you on June 17 asking us to make five-figure contributions to the DSCC. You followed that up with a voicemail* indicating that, if we contributed heavily enough, we would garner an invitation to join you and other Democratic leaders at a retreat in Kiawah Island this September.

I’m hoping you can help me understand the intent of your request because it’s hard not to conclude that DSCC politics have become so cynical that you actually expect people whom you routinely denounce to give DSCC money.

It is troubling that private citizens taking part in the discourse have become the targets of White House and DSCC fundraising missives, and we would certainly encourage you to rethink that approach. Ultimately, I expect voters will see through that and will weigh the issues on the merits alone. But in the meantime, if you could provide me some insight on what exactly you are asking of us and why, I would be most grateful.


So just to clear this up, when Republicans take Koch money, it's an evil conspiracy to "force through their extreme agenda." When Democrats want their money, they see no problem inviting them to a lavish retreat, presumably to discuss their thoughts on policy.

After Democrats Demonize the Koch Brothers, DSCC Asks Them for Money?

If you are going to attack those on the right, you might as well ask yourself WHY the Left needs to share the bed with them too.