Major Danish Daily Warns: “Globe May Be On Path To Little Ice Age


Oh, you mean the "extreme Global Warming" of our last decade - the one which Al Gore said would go "off-chart", through the roof of the conference room? 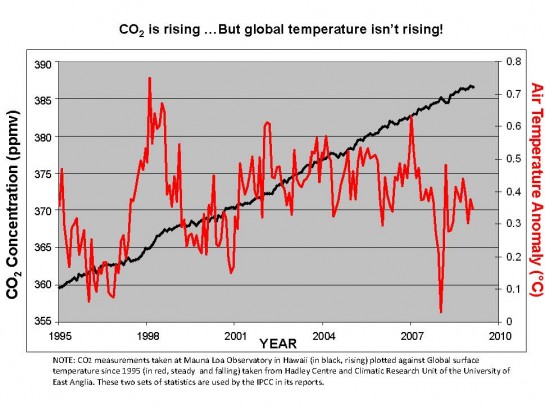 Source: flowingdata.com...
In red: the temperature. In black, the CO2.


I'm not saying anything about global warming - and I wouldn't give Gore the time of day.

Just pointing out that there is no global cooling and no imminent ice age, whatever the global cooling catastrophists might say (and let's face it, they've been saying it since at least the 1970s .....)


Edit - that chart only goes to 2009. And whatever the global cooling catastrophists and various religious groups say, CO2 alone does not determine global temp.
edit on 9-8-2013 by AndyMayhew because: (no reason given)

Originally posted by AndyMayhew
Edit - that chart only goes to 2009.


I know - we were talking about recent events. 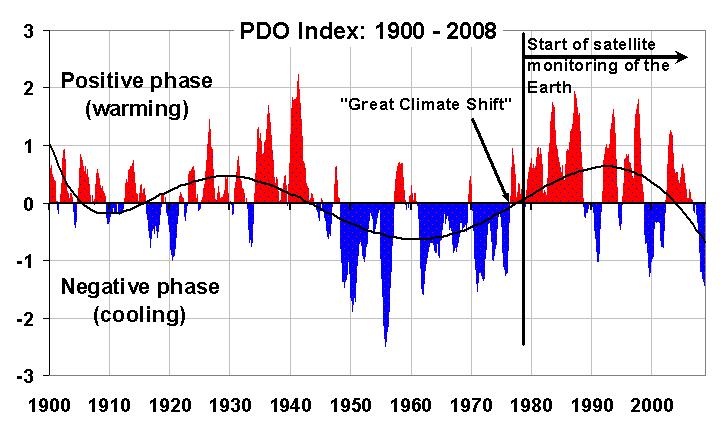 This chart reminds me of those taken at sea-level around the world.


And there's an even bigger, taken from Vostok ice core data:

BTW note that if you line up the two "0" axis in both of these charts, they actually match one another.

The common "hockey stick" chart you see in popular media is created by "bias compensation" of orginal data, which means that you artificially add a couple of degrees to the chart to "compensate" the thermometer's "inaccuracy". Which means, many Global Warming charts you see are not raw data and are "bias compensated" - in other words, were messed with, added a couple of degrees which were not there in the raw, and this amount of added degrees is rarely disclosed.


And whatever the global cooling catastrophists and various religious groups say, CO2 alone does not determine global temp.

Well at least we do agree on that point.

Just take a look at any, really, climate graph, and in most of them (even those featuring the "bias compensation") you'll see that worldwide temperatures after 1940 dropped, although CO2 started rising. Whatever's putting our climate upside down can't possibly be CO2. 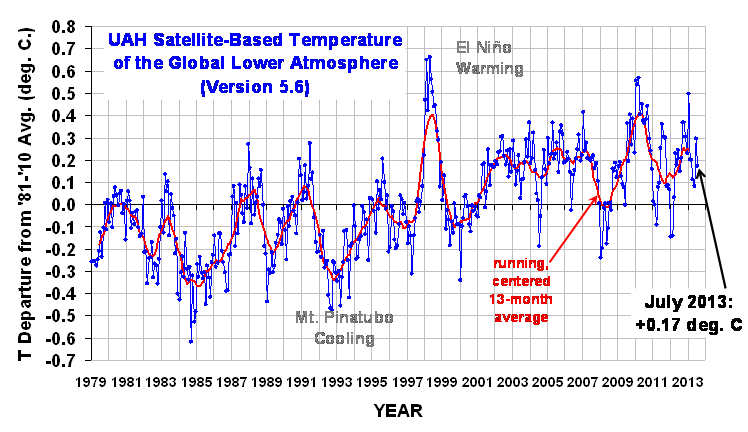 I suspect that the ong term trend for warming will continue, regardless of any downturn in solar activity - simply because it the ony factor affecting global temp (just as CO2 is not) though it may mean that warming over then next decade or so will not be so much as some authorities have in the past suggested. Question then is what happens when solar activity (as inevitably it will) perks up again?

Originally posted by AndyMayhew
Question then is what happens when solar activity (as inevitably it will) perks up again?


That, mate, is an excellent question, one which I can't pretend to know the answer.

Will the charged particles damage the magnetic field and let in more EM? Or will this effect be insignifiant compared to the natural cycles of warm/cold ages? I'd really like to know the answer too...

I have to log off now. I appreciated your posts, which were well backed, with sources. A star for your very good posts.

Science can be very weird. That's why it's called science. We may never learn everything about our world... but science is the hope that one day we might.

edit on Sat Aug 10 2013 by DontTreadOnMe because: --Off Topic, One Liners and General Back Scratching Posts--

Originally posted by AndyMayhew
New Ice Age? Ah, so that's why there's been record heat in Alaska, Greenland, Europe, the Med, China, Taiwan. Australia etc in the past few weeks

Normally the high Arctic has about 90 days above freezing. This year there was less than half that,” says Steven Goddard website.

“The Arctic ice extent is showing a remarkable recovery from the great oscillations of 2012,” says Guimaraes. “Compare with the previous years listed there, you’ll see that 2004 is the year that is closest to 2013 in terms of average temps during the summer.”

Believe what you want the thought police are not in full gear as of yet...However when someone wants to charge you money for breathing or farting then it is time to do a middle finger gesture IMO The real Science is not complete just short term trends that proclaim this is the way the world is headed...We can all agree climate does change hour to hour day to day regardless of man's desires....


How can we be headed towards an ice age when we are already in one?

posted on Aug, 9 2013 @ 09:33 PM
link
Weather is normal here, we had a couple of years of warmth but now it is finally getting back to normal. I think a week of real hot weather is just right. I had to run the furnace in July for a night, but that is normal up here to need to warm the house occasionally in the summer.

The rain is a little up, the warm humid weather was hard on the trees, the fungus was hitting the leaves. It cooled now so the trees are doing better. I do have some sort of summer cold, I think it is some sort of fungus or mold causing my immune system to react.

The researchers, from Imperial College London, and their academic partners studied mud samples to learn about ancient melting of the East Antarctic ice sheet. They discovered that melting took place repeatedly between five and three million years ago, during a geological period called Pliocene Epoch, which may have caused sea levels to rise approximately ten metres.
www.sciencedaily.com...
Scientists have previously known that the ice sheets of West Antarctica and Greenland partially melted around the same time. The team say that this may have caused sea levels to rise by a total of 20 metres.

The academics say understanding this glacial melting during the Pliocene Epoch may give us insights into how sea levels could rise as a consequence of current global warming. This is because the Pliocene Epoch had carbon dioxide concentrations similar to now and global temperatures comparable to those predicted for the end of this century.

What caused that warming ?


I was at first accepting of the Global warming theory, until I heard about the kyoto protocol, that sent up all sorts of red flags so I kept reading and researching.

NASA satellite data from the years 2000 through 2011 show the Earth's atmosphere is allowing far more heat to be released into space than alarmist computer models have predicted, reports a new study in the peer-reviewed science journal Remote Sensing. The study indicates far less future global warming will occur than United Nations computer models have predicted, and supports prior studies indicating increases in atmospheric carbon dioxide trap far less heat than alarmists have claimed.

Study co-author Dr. Roy Spencer, a principal research scientist at the University of Alabama in Huntsville and U.S. Science Team Leader for the Advanced Microwave Scanning Radiometer flying on NASA's Aqua satellite, reports that real-world data from NASA's Terra satellite contradict multiple assumptions fed into alarmist computer models.
news.yahoo.com...
"The satellite observations suggest there is much more energy lost to space during and after warming than the climate models show," Spencer said in a July 26 University of Alabama press release. "There is a huge discrepancy between the data and the forecasts that is especially big over the oceans."

In addition to finding that far less heat is being trapped than alarmist computer models have predicted, the NASA satellite data show the atmosphere begins shedding heat into space long before United Nations computer models predicted.

A little ice age will be much more devastating .

I have long thought, since I first heard of them, that a little Ice Age would come. It just makes so much sense, not only from a scientific point of view. But, just as Karma payback, to everyone screaming about global warming, who don't even take one minute to look into the Earth's natural cycles.

If I didn't know, just from common sense, that a lot of those people would die from such a little Ice Age, I would laugh at them all. But, it's not funny, and a real danger. I just hope that if it does come, people prepare, and survive.
edit on 10-8-2013 by Catacomb because: (no reason given)

posted on Aug, 10 2013 @ 12:09 PM
link
Yep I have followed this idea for a few years now.
The Sun seems to be headed for being an ember again
instead of a bubbling cauldron. Maybe...

And more ice is actually the norm. These little peaks of warm
are few and far between in Earth's relative recent history
( last few million years) so buckle up peeps.
I think it's about to switch and freak everyone out.

However if we can get politics out of the equation
it's certainly something we as humans can handle.
It's going to take cooperation. Like moving food production
to the equatorial regions etc. But hey look at it this way..
it'll give us something to do.

posted on Aug, 10 2013 @ 12:21 PM
link
In a sane society, if this is proven true, all of the destructive legislation passed to save us from global warming would be undone.
I'd be willing to bet a heap of money that not only will all the old laws stand, but new destructive laws designed to save us from global cooling will be enacted.
They will fine us if we use too much energy and fine us if we use too little.


What destructive laws would those be?

posted on Aug, 10 2013 @ 06:07 PM
link
the global warming theory has ALWAYS included areas of the world that will ice over that weren't icy before. every time people post about this ice age stuff i roll my eyes because it falls directly in line with what's been said all along. thats why "climate change" is much more accurate. while overall global temps will rise there will be areas of the earth that ice over. global warming has NEVER meant that winter will disappear or it will never be cold anywhere again. yes, certain areas will experience what will feel like an ice age.

posted on Aug, 10 2013 @ 06:45 PM
link
The following little clip from ScienceAtNASA is very interesting. It presents evidence of what happens when a solar storm hits the planet. The role played by CO2 is intriguing to say the least.