(Reuters) - Glenn Greenwald, the American journalist who published documents leaked by fugitive former U.S. intelligence contractor Edward Snowden, plans to make new revelations "within the next 10 days or so" on secret U.S. surveillance of the Internet.

"The articles we have published so far are a very small part of the revelations that ought to be published," Greenwald on Tuesday told a Brazilian congressional hearing that is investigating the U.S. internet surveillance in Brazil.

posted on Aug, 6 2013 @ 08:05 PM
link
Ok, just to say if Glenn Greenwald has an unfortunate "accident" in the next 10 days then something very strange may be going on.

I wonder how much these next revelations will stir up the political pot? Looks like the public of South America is going to get very annoyed, rather soon.

"There will certainly be many more revelations on spying by the U.S. government and how they are invading the communications of Brasil and Latin America," he said in Portuguese.

www.reuters.com
(visit the link for the full news article)
edit on 6-8-2013 by Zcustosmorum because: (no reason given)


I think it's highly likely Mr. Greenwald will experience an unfortunate bit of bad luck and will either suffer a heart attack, car or plane crash, or some other early demise. Or, the CIA will threaten his loved ones and he will have a sudden revelation not to do anymore stories.

The current administration doesn't play nice - They're the mob on steroids. No one is allowed to keep on embarrassing them, Snowden just happened to be a black swan that caught them by surprise and slipped through the cracks.

... '' In x days Ím going to release information that will damage the US Credibility around the world ''

If I had this information.. id fax/email/send it to every news organization i could without saying a word

posted on Aug, 6 2013 @ 10:27 PM
link
The more and more examples of piecemealing this information, has me leaning more towards the whole deal being a carefully staged event...

Originally posted by Agit8dChop
Why run the risk of giving them time to kill you?

... '' In x days Ím going to release information that will damage the US Credibility around the world ''

If I had this information.. id fax/email/send it to every news organization i could without saying a word


Probably to force media to up the bidding to get the scoop. My guess is that the story is probably pretty boring, but the more hype garnered = more interest from news organizations, which gets them competing, which gets more money.

posted on Aug, 6 2013 @ 11:06 PM
link
What are the chances, Americans will shrug and believe what they are told by the White House, MSM and posters online, that this is what is necessary to be protected from "terrorism".
Afterwards it will be the "new normal".

posted on Aug, 6 2013 @ 11:27 PM
link
Why on earth would you ever say this, "Greenwald told Reuters he does not believe the pro-transparency website WikiLeaks had obtained a package of documents from Snowden, and that only he and filmmaker Laura Poitras have complete archives of the leaked material."

What kind of moron tells the US that all you have to do is get to 2 people? Seems like a convenient way to wrap up loose ends if this is a hoax. Those two people are killed and we all know that it's over. I'm not saying that is what is happening but, for the love of Jeebus, why would you lay all your cards down like that? 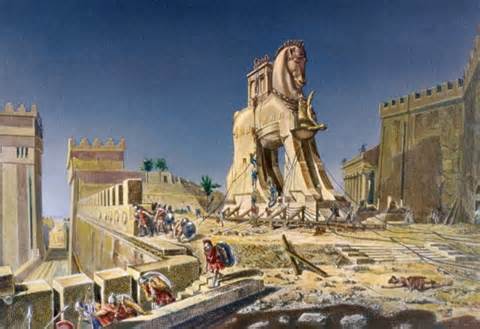 Op proceeding as planned. Move along.

We can already see the soldiers inside of it with their knives poised to strike.

Well... There are hundreds of more Snowdens out there, if not thousands.

He ain't ending up dead... too late for that.

My guess is that he ends up coming back the the ole US of A and spends his life in prison.

Old news a couple of years from now.

posted on Aug, 7 2013 @ 12:31 AM
link
Ok... What Greenwald did is the equivalent to starting a thread in the WWIII forum saying you have information on black ops, but you won't reveal it here....


Exactly, there is no reason that everything could have been released at once. All they are doing is tring to keep all eyes on them for attention and rateings.

But on a side note if putting it out in pieces is what it take to keep the public intrested, then so be it. Alot of the public has all ready forgot PRISM, too soon it will be X-key score what? And did you see what Lindsay Lohan did!


Now they just have to sell sell. Also isn't this going against the agreeement he has with Putin?

Originally posted by Senduko
Also isn't this going against the agreeement he has with Putin?

Was thinking that myself, i bet he gave a buch of stuff out before had. They may have had an agrement of some sort with the reporters. Or even gave it to others as an insurance policy to release.

posted on Aug, 7 2013 @ 04:15 AM
link
The floodgates are opening. I see new revelations daily here TechDirt.com and here ActivistPost.com.

Unfortunately ATS is losing favor for me in terms of breaking real news. I've read in other places that it has been overrun with Govt shills that seed disinfo, doubt and thread killing posts. Probably not the fault of ATS itself, but sad none the less.

Originally posted by unphased
Ok... What Greenwald did is the equivalent to starting a thread in the WWIII forum saying you have information on black ops, but you won't reveal it here....

No, it is like creating an ATS thread that says "So and So will be releasing some information on such and such" and then, unlike in most typical suchATS threads, actually delivering on the information as promised.

Glenn Greenwald, and to a lesser degree Barton Gelman, have broken the bombshell story of the year. And it is a big, involved story, so it takes time to document and publish it all. He has other things on his plate as well, including speaking engagements to increase awareness of this issue. He is likely writing a book on the subject too, as he has done with other issues he has reported on. That he is also exercising some PR acumen in raising interest in soon-to-be released news stories bothers me not one iota. Would it make sense to publish your biggest story first? I think not.

Last time I checked, we're still waiting for Glenn Beck to release news bombshells on this, that and the other thing that he has claimed he was going to do within three days -- and the last of these was made over a month ago.

Greenwald has been a voice in the wilderness for about six years now, telling truth about power. It is great that he is finally getting some attention from the MSM. Glenn Greenwald has more journalistic moxie and integrity in his sphincter than most big, corporate "journalists" have in their whole body.

As to what will be released, I would imagine from reading in between the lines of what has been revealed so far and what Senators Wyden and Udall have intimated, that it is very likely that content is also being collected and sifted through. If google is basing aimed advertisements on key words in people's e-mail, then the NSA has the ability to do the same. I would imagine similar such monitoring is being done en masse with people's textings and phone calls as well.

People like to predict really far-fetched stuff here at ATS. Well I'm going to "go out on a limb" (about a millimeter) with this speculation.

I'd also imagine that Glenn has some deadman switches with regards to this information. In addition, he has colleagues also working on these stories with him, so there would have to be a series of untimely deaths in a small coterie of journalists at The Guardian. But anyone familiar with a little bit of Gore Vidal and Noam Chomsky are quite aware that modern governments do not control through totalitarianism and such violent means, but rather rule through the consent given by a pathetic and uninformed populace.

Governments and corporations are in cahoots and control most of the major media outlets, so they decide for the most part what the pubic knows, and they keep on throwing ball or shouting "squirrel!' to distract the masses from what is being done to the by their governments and corporations. The whole bread 'n circus schtick is another part of this, and that was understood and perfected a century or so before Christ -- by the very Republic after which the founding fathers modeled the US government.
edit on 7-8-2013 by MrInquisitive because: (no reason given)

Originally posted by JacKatMtn
The more and more examples of piecemealing this information, has me leaning more towards the whole deal being a carefully staged event...

Its very possible but I think the 21 shut embassies was done to distract us from NSAgate, so why trudge it back up?

But you have to admit that just as the people are settling back into their slumber BAM a perfectly timed release.

They are dying for armed resistance. Simple as that. Over the last decade plus this government and others around the world have built this huge "anti-terror intelligence gathering complex and like anyone with a new shinny toy are itching to use it.

The Boston bombing was just a dick tease. They want more.
edit on 7-8-2013 by Rosinitiate because: (no reason given)