posted on Aug, 6 2013 @ 03:47 PM
link
I have been researching some of the possible reasons why the rail disaster happened. It would seem from press reports and the videos of the crash that some very mysterious things took place that are just not adding up. I was searching youtube and came across a Spanish video which highlights something very unusual considering the part of the track where the crash occurred.

Most members will probably say the derailment was caused by the train going too fast into a tight curve. You may be correct for the track layout as it was on the curve before the crash took place. But there are some other things that just do not seem to add up. I feel there is something about the tilt of the track on the curve even for an 80km/h speed restriction. If you have watched the videos would you say there is superelevation or tilt of the track to counter the increased forces when a train travels round the curve?

Could there possibly have been a failure in not making allowances for a train at abnormal speed or out of control? It's not as though it's any curve, It's the tightest curve on that particular line that is preceeded by a very long straight section that passes through a tunnel, over a viaduct and then through another tunnel before reaching the start of the curve.

Here's the video. See what you can make of it?


There's the appearance of some small explosion or charge just prior to the passenger cars leaving the rails. The engine made it around fine, which is heavier than loaded passenger cars. It's difficult to say from a video. Unfortunately we have to rely on what we're told happened.

Originally posted by Bilk22
reply to post by arianna


There's the appearance of some small explosion or charge just prior to the passenger cars leaving the rails. The engine made it around fine, which is heavier than loaded passenger cars. It's difficult to say from a video. Unfortunately we have to rely on what we're told happened.


The explosion is clearly the breaking of the power lines that happens after the first carriage leaves the tracks and strikes them. 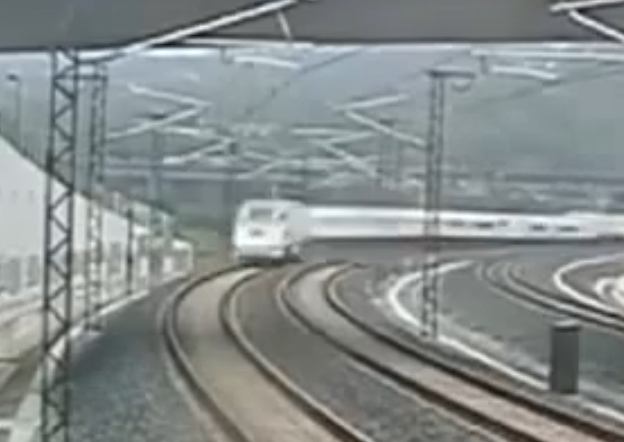 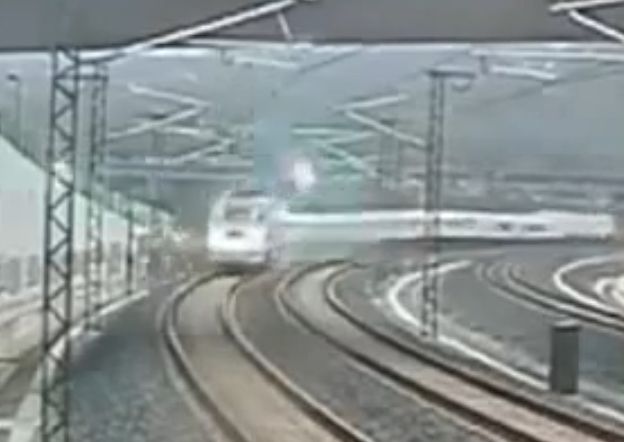 I have been researching some of the possible reasons why the rail disaster happened. It would seem from press reports and the videos of the crash that some very mysterious things took place that are just not adding up.

OK I see that better. I wasn't able to capture the frames like that. However it's curious why the engine would stay on the rails and not the trailing cars - well unless the weight of the engine at speed did something to damage the rails.


I have a feeling the is a centrifugal force at work like when you spin a rope around. The force would be greater the further you are away from the front carriage.

posted on Aug, 6 2013 @ 05:20 PM
link
reply to post by Bilk22
Having a lot of model trains around my house, I can tell you that if I put an engine pulling long cars of equal length, in this case the scale equivalents of an 80' Pullman car through a tight radius at a higher amount of speed than normal, the first or second car behind the engine will pull off the track at the moment of greatest tangential velocity.
Those cars look like 60 footers, but nonetheless, this is basic physics at work. The cars come in at a faster rate than the track can handle and as the cars extend across the radius like a chord on a circle, a lot of excessive force is pressing the wheel flange to the insides of the rails as the trucks (wheel assemblies) form the endpoints of the chord. The rear weight of the rest of the trains accelerating into the forwards cars through the curve will cause the flanges to ride up on the rails and eventually the train will be pushed out of the radius. This effect is even more likely to happen if the engine has entered the curve where a car behind it is fully on the curve and applies the brakes too rapidly.

I see nothing out of the ordinary here.

posted on Aug, 6 2013 @ 05:24 PM
link
reply to post by PhoenixOD
Phoenix, this force can be quite great when you have a line of cars (Mass in motion) trying to travel in a straight line pushing the car that is turning.
The engines usually have traction drive so the cars can't force it to go faster which usually results in the classic buckling of cars similar to a tractor trailer jackknifing when the tractor unit slows faster than the trailer.


What curious events where you thinking?
I believe there is something fishy with the whole event but that is rather political and bussiness related.

On the crash, as i said before on another thread before the info from the black box and the driver's testimony, i believe the train could have made the curve at that particular speed but it derailed because someone pulled the emergency brakes. A bit like when you're taking a curve with your car, if you brake in the middle of the curve the car is more likely to spin or loose traction.
The black box now revealed that the emergency brakes were pulled just before the accident and that's also what the driver confirmed.
Of course it's not sure that this caused the derailment, i guess future computer models will determine the real cause.

On the video you posted: no idea what that is,
reflection(from the train or sun or both); good possibility
person; not likely


The only "explosion" I say was when it hit the power line and the sparks from the severing line. Some things are just tragedies, not conspiracies.

posted on Aug, 7 2013 @ 03:40 AM
link
Further to my original post, there is something happening at the lower part or start of the retaining wall that is not physically connected with the train. What it is I am not sure as the resolution of the video is poor. As far as an 'explosion' is concerned, one of the leading carriages must have risen up and came into contact with the high voltage catenary to produce the bright flash seen in the video.

The question still remains; why did the train derail? One expert stated that the train should have been able to take the curve at 200km/h. This is a rediculous claim as there is little or no banking of the track on the tight curve and even for trains travelling at 80km/h I would have expected to see a degree of banking on the curve. In fact, from viewing the videos it would appear that there is no banking or superelevation at all. This would explain why the train left the track. The side forces were just to excessive to maintain equilibrium at 190km/h.

Originally posted by arianna
I have been researching some of the possible reasons why the rail disaster happened.

So who have you interviewed about the crash? The driver?
Passengers on the train?
Eyewitnesses?

Have you been to the crash site and examined the track, the wreckage etc?

Or by "research" do you mean you watched a youtube video and made something up, or visited a site and just copied what they posted?


By investigating information from many sources probably like everyone else who is looking into the possible causes of the fatal accident. One doesn't have to jump on a plane to be at the scene of the incident, others do it for you in the form of television news reports, press reporting and uploaded video information.


I have been researching some of the possible reasons why the rail disaster happened. It would seem from press reports and the videos of the crash that some very mysterious things took place that are just not adding up.

Train supervisor called the driver minutes before the crash.

Talk about distraction as the train was heading towards the dangerous curve at 179km/h. Something here is not making sense. The supervisor phoned the driver about making a stop to accomodate a woman with children at the Pontedeume station but the driver would have been fully aware of the station as he had travelled the route sixty times before. So why did the supervisor really make the call to the driver at that particular time when the Pontedeume station was a scheduled stop on the route to Ferrol anyway?

posted on Aug, 7 2013 @ 03:58 PM
link
I have a question about the braking system used on the type of train that crashed at Santiago.

Any help would be greatly appreciated.