Again, the media is trying to cover up this obvious case of White Privilege by leaving race out of it. 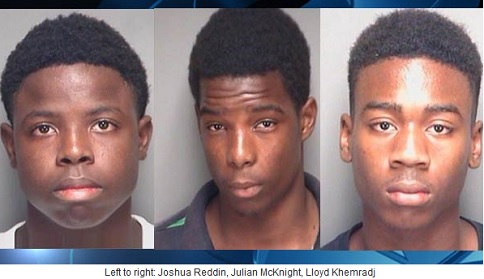 Three students are accused of beating a younger student aboard a Pinellas County school bus.

Officials said the bus driver from Lealman Intermediate School called for help when three students “ganged up” on a 13-year-old student, kicking and punching the victim.

The driver stopped the bus near 20th Avenue South and 51st Street. Police said the suspects used the emergency exit of the bus to escape.

An investigation revealed one of the suspects had tried to sell drugs to the victim in a school bathroom. The victim notified officials at the school. Later that day, the suspects and victim rode the same school bus home.

I don't blame the bus driver one bit. 3:1 if they turned on him? He didn't want to die for this and that well could have happened, given stories we read daily right now. Aside from that, this kid couldn't and didn't fight back. That may have saved him from FAR worse. We have no idea what the driver could or couldn't see by actually being there. I.E....one or more of the attackers could have had weapons visible under clothing but not evident for the camera's resolution to capture. It's hard to say...but I'll never fault someone for NOT going into a multi-attacker situation as a lone man. I respect those who WOULD ...but don't look down on those that won't, either. Self preservation is a powerful drive.

Now the cops? What is the deal??? It this were 3 big corn fed Bubba's beating down a small black child, we'd see them all on hate crime charges, if not federal, already. The driver wouldn't be investigated like this instead, I'm betting...unless accused as an accomplice or something. Perhaps the cops need to focus on the ones who committed the act of brutality ...not on the man who called for all possible help but didn't martyr himself to add to it.

* and if the driver HAD intervened and beat down one of these kids in defense? NO question he'd be on charges today. You just can't win in racial politics. Never.

posted on Aug, 5 2013 @ 02:16 PM
link
Horrid but in the video it blames the bus driver for not doing enough? sorry he did his job called dispatch and shouted for the thugs to stop...not everyone is a hero and he also could have been beaten.
Hope the little scumbags get what they deserve and I hope the victim recovers fully.

AlienScience
+23 more
posted on Aug, 5 2013 @ 02:17 PM
link
The story says they attacked him because he turned them into school officials for selling drugs.


Well, we can make it about 3 dope related scumbags beating down a kid who did the right thing, if that makes the outcome and the injuries the kid sustained any different? Either way...They ought to be sitting in a cell right now. It's Monday. Where's their arraignment on felony charges? I sure couldn't beat someone like this, even another adult, and NOT be facing immediate criminal charges that would, AT BEST, break me entirely to defend against.


Have read this story on several news sites... and what I tender is a means by which to shift the blame from those who conducted the attack, to the bus driver and it is all based on race.

If we saw this story and no one had skin color... we would indeed think the driver should have done more, but we would also say that those who carried out the attack were anything but innocent or excusable.

Until a day... if or when we ever seek MLK's dream of a colorblind society realized... things like this will continue to be the stuff of circus media headlines and political/racial division.

Originally posted by Wrabbit2000
reply to post by AlienScience


Well, we can make it about 3 dope related scumbags beating down a kid who did the right thing, if that makes the outcome and the injuries the kid sustained any different? Either way...They ought to be sitting in a cell right now. It's Monday. Where's their arraignment on felony charges? I sure couldn't beat someone like this, even another adult, and NOT be facing immediate criminal charges that would, AT BEST, break me entirely to defend against.


They have been charged and are waiting for their day in court, so what's the problem?

Any other excuses to make this a race based thread? 
I recently received such a beating. My attacker was only charged with a misdemeanor.

Originally posted by groingrinder
reply to post by Wrabbit2000


I recently received such a beating. My attacker was only charged with a misdemeanor.


Can't help but laugh out loud!!

Please note 'white privilege' in the video above...

I hope that such... um, 'privilege' as this doesn't become the norm for anyone...

posted on Aug, 5 2013 @ 02:46 PM
link
the difference is the kids were immediately arrested and they will be charged and will be found guilty, the evidence on the video seems pretty clear. if the story is correct that they beat the kid up for snitching on them doesn't make it a racist attack so quit trying to make it out to be something it's not. why do some of you insist on trying to fuel the fire? don't even try to compare this to the trayvon case, you're grasping at straws and trying to stir up the bees, stop it already.

Originally posted by AlienScience
The story says they attacked him because he turned them into school officials for selling drugs.

but you can't racebait with that


just another ermagerd!"planet of the apes!" thread
nothing to see here
other than for gaining an insight into how many members here
should really be posting on stormfront [or edl's site for those across the pond]
based on how many flags and stars this deceptively titled thread gets.

but pay no heed to my words, as I Am quite "Insane".


I think what people are up in arms about when it comes to the racial part is the fact the we KNOW this whole thing would be totally blown up whether the young men were arrested or not if the attackers were WHITE. We know this event would be attached to a "hate crime" and we would have the usual Jessie Jackson, Al Sharpton etc on site to make sure this was a huge race debacle. And I think those acting all confused about this double-standard know this as well but refuse to admit it.

Originally posted by AlienScience
The story says they attacked him because he turned them into school officials for selling drugs.

If they were white and the kid was black this would be a national scandal... since they're black and the kid is white, the problem is being deflected towards the bus driver through "child neglect charge" using the video... instead that video should be used to put those kids in a labor camp till they reach 30. If the victim was black you would never hear about the bus driver... like I said - deflection.

See where the "race issue" is?

Consequence and repercussion, is where is at.

posted on Aug, 5 2013 @ 03:00 PM
link
This is exactly why young kids don't like snitching on each other. They never know if they'll be beaten for snitching! Schools should never give the name of kids who turn other kids in. Not only that, they should warn the perpetrators any violent action against another student concerning the infraction will be met with charges being filed followed by school expulsion.

Kids today are not held accountable for their actions, it takes a major assault like this for it to sink in. They don't think twice before assaulting another student. I blame the parents for not teaching their kids proper morals and the value of life. I blame the schools for not adhering to strict policy guidelines and not being consistent with student discipline. A generation of children (not all of them) have lost the idea of taking personal responsibility for their actions.

This is ATS where every time a white person gets beat up by a black person it was because of racial motivation.

Most of ATS does not live in reality and lead extremely culturally sheltered lives.

The kid was beat up for TELLING ON THEM, not because he was white.


Originally posted by AlienScience
The story says they attacked him because he turned them into school officials for selling drugs.

What are you defending exactly? Drug dealing? I said for the beating they should be put in a labour camp, because clearly they should be kept away from society until they can behave like the rest of us, normal human beings... for drug dealing anyone should be shot - I didnt even address drug dealing, and you say "po' white boy was beating for snitching"... really?

The tone of your comment reflects your values. Nice try provoking everyone with "stormfront"... too bad the word its losing its impact it once had. Still, nice effort.


Originally posted by AlienScience
The story says they attacked him because he turned them into school officials for selling drugs.

If they were white and the kid was black this would be a national scandal....

Not true. There are thousands of racially motivated white on black hate crimes committed every year according to the FBI. How many get ANY national media attention? Maybe 1 every now and then?

There's a lot of delusion going on here.

Also if you go into youtube and search for black on white hate crimes, you'll get plenty of news reports.

chiefsmom
+5 more
posted on Aug, 5 2013 @ 03:16 PM
link
I really don't give a darn what color ANY of these kids were.
What I want to know is, what the hell is wrong with the school, that let these kids on the bus, after being told they were dealing drugs???? What happened to zero tolerance? Why weren't their parents called?