Did you hear about the 800 esteemed scientists who came together and demanded the production of genetically modified crops and products be stopped? Scientists who called on world powers to re-evaluate the future of agriculture and seek sustainability rather than corporate profits? Don’t be surprised if you haven’t, as the mainstream media won’t touch this one.


This was started over a decade ago and is still being updated. It was the creation of The Institute of Science in Society and is a non-profit group of scientists from around the world. The letter has 828 signatures representing some 84 different countries.

It is evident that further tests need to carried out before the release of these bio compounds into nature and into our diet.

The scientists are extremely concerned about the hazards of GMOs to biodiversity, food safety, human and animal health, and demand a moratorium on environmental releases in accordance with the precautionary principle.

They are opposed to GM crops that will intensify corporate monopoly, exacerbate inequality and prevent the essential shift to sustainable agriculture that can provide food security and health around the world.

They call for a ban on patents of life-forms and living processes which threaten food security, sanction biopiracy of indigenous knowledge and genetic resources and violate basic human rights and dignity.

They want more support on research and development of non-corporate, sustainable agriculture that can benefit family farmers all over the world.

We, the undersigned scientists, call for the immediate suspension of all environmental releases of GM crops and products, both commercially and in open field trials, for at least 5 years; for patents on living processes, organisms, seeds, cell lines and genes to be revoked and banned; and for a comprehensive public enquiry into the future of agriculture and food security for all. 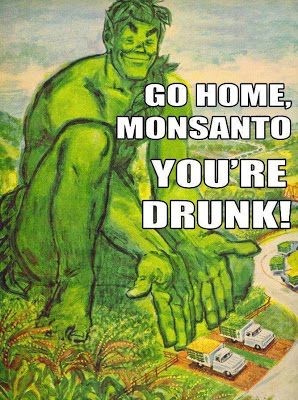 Wrabbit2000
+3 more
posted on Aug, 5 2013 @ 01:52 PM
link
Now that is a cause I could get behind and downright Occupy something over! (Monsanto Headquarters in St. Louis, Missouri comes to mind... hint hint hint)

It's about time the science community spoke loud, clear and with a unified voice of enough number to get attention. Enough with the 'it's perfectly safe!!' in the pursuit of literally OWNING human food supply and the very plants grown to supply it.

Enough with the Umbrell....errr...Monsanto Corp!

posted on Aug, 5 2013 @ 02:10 PM
link
GMO is a big game and lot of money involved. Monsanto has its own scientists and lobbyist for turning issues to their favour. Monsanto has its people all the way to the White House and Monsanto Protection Act Signed By Obama himself and the same time when shaking hands with Monsanto the first family of the United States eats organic food from their garden, healthy food !

posted on Aug, 5 2013 @ 02:51 PM
link
I hope some of these esteemed scientists don't start having heart attacks, accidents in their hotel rooms, and sudden, crippling suicidal thoughts.

I fear Monsanto is just too big to fail


Nothing is ever too big to fall. There was once a time the might of Rome was considered to big to fall. All things man made will fade in time. There is a big backlash against GMO many products have been banned across the world now and there is a strong public opposition to the idea of GMO.

But premise of the thread isn't exactly accurate. the letter actually calls for a moratorium, not an "end".

I wonder if any of the original signers have changed their opinion after 13 years with no disastrous results of the "experiment". I wonder if they all think a moratorium still makes any sense.
edit on 8/5/2013 by Phage because: (no reason given)

9. The threats to biodiversity from major GM crops already commercialized are becoming increasingly clear. The broad-spectrum herbicides used with herbicide-tolerant GM crops decimate wild plant species indiscriminately, they are also toxic to animals. Glufosinate causes birth defects in mammals(27), and glyphosate is linked to non-Hodgkin lymphoma(28). GM crops with bt-toxins kill beneficial insects such as bees(29) and lacewings(30), and pollen from bt-corn is found to be lethal to monarch butterflies(31) as well as swallowtails(32). Bt-toxin is exuded from roots of bt-plants in the rhizosphere, where it rapidly binds to soil particles and become protected from degradation. As the toxin is present in an activated, non-selective form, both target and non-target species in the soil will be affected(33), with knock on effects on species above ground.

How can you define the above as being non detrimental. It certainly appears to me that these have detrimental effects of humans and the surrounding biosphere.

You realize that those very dated studies do not stand up to the research which has been done since, right?

The letter is obsolete. Maybe you should start a new one.

posted on Aug, 5 2013 @ 04:16 PM
link
I wonder if they know that scientists all over the world are using Biotechnology and GMO foods to actually fight problems that exist in the world instead of trying to take everything over like some group of maniacal super-villains.
Ghana food crops face extinction
Forbes
Gmo Foods

Being afraid of whats in your food only makes sense until you start to wonder what every food monopoly that already exists is putting in your food.

posted on Aug, 5 2013 @ 04:20 PM
link
Will this turn out to be like all the other Anti GMO claims where half truth is told. Will we find out half of the scientists aren’t scientists or 99% of those that signed do not have a background that’s even remotely close to the topic?

It wasn’t that long ago there was another list of so called scientists who were anti global warming but when those names were looked into many of them didn’t even have degrees and practically none of them had any background in climatology.

I am just tired of the hyperbole and want to know the truth backed by facts.

posted on Aug, 5 2013 @ 04:23 PM
link
The said thing about this is the opinion, and it is an opinion, of 800 scientists means WAY more then the opinion of millions of people who are not of the modern day anointed class.

Even more disheartening, there are countless scientists who are so delusional that they feel that unleashing modified foods on the populace of the planet, without regard to safety, is not only reasonable, but they are doing good by creating patented foods now owned and controlled by one corporation, the same corporation that produced agent orange and a whole host of killer chemicals with the same "it's fine until it isn't, then... so what..."

In the end, they will do as they please, because they can't go backwards. They've invested too much to turn back now. Pessimistic? You could generate the same scientists polarity about nuclear power - see fukashima, hanford, and on and on for the results.

Originally posted by Phage
There are quite a few more that 800 scientists in the world.

But premise of the thread isn't exactly accurate. the letter actually calls for a moratorium, not an "end".

I wonder if any of the original signers have changed their opinion after 13 years with no disastrous results of the "experiment". I wonder if they all think a moratorium still makes any sense.
edit on 8/5/2013 by Phage because: (no reason given)


what happened to first do no harm?
if pharma has to prove safety, why does GMO get a free ride?
if you then claim there is no substantial difference, why can they receive patents?

remember either they are "different" ie patentable and therefore require extensive testing
OR
there is no real difference, ie they don't require safety testing, but then are not patentable.

i wonder how this dichotomy can be reconciled?

both cant be correct,

PS do you go out and try to eat as much GMOs as possible?
ie if there so safe why dont you eat them exclusively?


Are you saying that science that is over ten years old is no longer valid and obsolete.. Are you categorically stating that all the 61 scientific papers cited have now been disproven.

If even one of the papers has been shown to be invalid it makes the letter obsolete.
But many more than one of them have been shown invalid.


I have read your posts from time to time on ATS, all with a distinct flavour and wonder what your position on genetically modified food stuffs is?

I've stated it many times.
I have seen no convincing evidence that they are harmful and I have no reason to think they are inherently dangerous.

Originally posted by Thorneblood
I wonder if they know that scientists all over the world are using Biotechnology and GMO foods to actually fight problems that exist in the world instead of trying to take everything over like some group of maniacal super-villains.
Ghana food crops face extinction
Forbes
Gmo Foods

Being afraid of whats in your food only makes sense until you start to wonder what every food monopoly that already exists is putting in your food.


Make Mother Nature YOUR food supplier and you will not have worries! Do not buy your food, grow it! Yeah it is tough to keep track of every little thing that goes into food that does nothing nutrition wise for us. You can eat everything that the corporations tell you to.......or you can think for yourself and remember that they are not here to feed you nutritious food. THEY ARE HERE TO MAKE A PROFIT. I have much respect for farmers. I have started removing "ornamental" plants and shrubs from our property and I will replace them with food bearing plants such as fruit trees and vegetable bushes of various sorts.

Originally posted by Phage
reply to post by LarryLove

I've stated it many times.
I have seen no convincing evidence that they are harmful and I have no reason to think they are inherently dangerous.

Is there any strong independent research in favour of genetically modified food readily available to read? Ideally research funded without vested interests.

I'm not sure what you mean by "in favor of" but there is much research on many aspects of the subject.
I encourage you to investigate both the research and criticism of it.