On July 23 photographer Nathan Ziegler set up the time-lapse camera in the Old Pioneer Cemetery in Milton-Freewater, Oregon to film the sunset. The camera was set to take a still photo at 30 second intervals. After reviewing the footage, Ziegler noticed a strange figure in one of the frames. The figure appeared in one frame at 9:08:30 but isn't in either frame 30 seconds before or after that frame. “I don’t know what to make of it,” Ziegler said about the strange figure in the video.

Here is the short video -


Yikes, I dont know, do you think maybe someone just walked up to the tree in those 30 seconds then walked away again?
Creepy anyway! 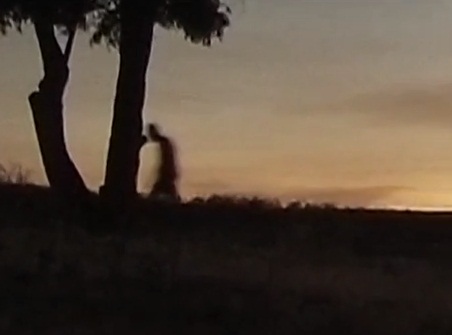 posted on Aug, 5 2013 @ 10:29 AM
link
Very interesting.
It would be nice if the shots were closer together than thirty seconds. I think a person could run into area, be in one shot and leave before the next shot is taken.

posted on Aug, 5 2013 @ 10:36 AM
link
Doubt it was hoax'd as it was just a pic taken every 30 seconds. Guess we would have to determine the actual length of distance the person walking would have to cover to go through the entire frame and see if it can be done in 30 seconds. That does not appear to be a lot of distance for a person to cover in 30 seconds so my guess is the camera snapped a shot just before the person came into frame and the next shot was 30 seconds after with the person in the frame and the next shot was again 30 seconds after and the person had walked out of frame by then. Not sure what the big mystery is here though...it's not like this was a video...they were still shots taken at intervals and 30 seconds is a fairly long interval....just eyeballing it I would think anyone could cover that distance in 30 seconds.
edit on 8/5/13 by Vasa Croe because: (no reason given)

posted on Aug, 5 2013 @ 10:42 AM
link
Very interesting. 30 seconds is a very short space of time and it looks like it is a huge distance to cover to get completely out of sight if it was indeed a person.

posted on Aug, 5 2013 @ 10:48 AM
link
I would think that if you were approaching the tree from the left side of the screen then it would be pretty easy to get there and leave the same way in under 30 seconds.

The thing that has me questioning it is he left the camera there.

An old abandoned cemetery with a history of vandalism is not some place I would just leave camera equipment and hope no one messes with it or steals it.

posted on Aug, 5 2013 @ 10:50 AM
link
Behind the Tree is a HILL... how do I know? Ah good question so glad you asked (even if you didn't!) The field of view drops off just at the Tree instead of going further out toward the horizon. If you look at the beginning of the time lapse you see off to the right this cemetery sits on top of a hill and you see the horizon (Only off to the right.)

The shadow figure walks up the hill behind and to the right of the tree (out of camera view). Then (in camera view) comes up over the Hill, turns and walks off to exit Stage left even...LOL All easily with in 30 seconds.

I see no mystery nice time lapse though.
edit on 5-8-2013 by abeverage because: (no reason given)

Originally posted by Lady_Tuatha
I would think that if you were approaching the tree from the left side of the screen then it would be pretty easy to get there and leave the same way in under 30 seconds.

Story says it's a cemetery and I would think people would visit relatives that were buried there. Again, I don't think that distance is that large to cover from one side of the frame to the other in 30 seconds. If we could get an accurate idea of how large that distance is and how close the person is to the camera we could probably figure it out. Humans average 1.4 m/s which at 30 seconds with an average human stride is about 147 feet in a 30 second window. I would surmise this fits within that window.

posted on Aug, 5 2013 @ 10:55 AM
link
This is an intriguing photograph. The anatomy of the neck on this shadow figure seems rather odd. Being that this is an old pioneer cemetery, could we be looking at the ghost of someone who was perhaps hanged for his crimes?

Watch someone walk for 59 seconds - they can cover quite a bit of ground in 1 minute.

wonder whats to the left of that area and would anyone have the need to be there at that time of evening.


The camera was placed and retrieved by someone too. Maybe theres a pot field nearby. Maybe he's a hunter? Homeless? Looking for cameras people put in graveyards?

A ghost? Well the ghost is walking, motion blur of the legs is apparent. Perhaps if it was floating along and you could see under or thru it...

My take is human.

Originally posted by IamAbeliever
This is an intriguing photograph. The anatomy of the neck on this shadow figure seems rather odd. Being that this is an old pioneer cemetery, could we be looking at the ghost of someone who was perhaps hanged for his crimes?

The anatomy seems strange because the expose is long enough to capture motion thus blurring the figure and creating an illusion of odd anatomy.

Originally posted by Lady_Tuatha
I would think that if you were approaching the tree from the left side of the screen then it would be pretty easy to get there and leave the same way in under 30 seconds.


yeah there is no doubt that it's doable.

I would like to know if its just a coincidence, a random person on an evening dander who happened to be caught in that one frame, or if its entirely set up by our school principal photographer, maybe him or one of his friends were the creepy tree guy?

I posted it here because I found it quite creepy for some reason, also I thought some of our resident paranormal buffs might find it interesting, and dare I say it, may even speculate as to it being a ghost 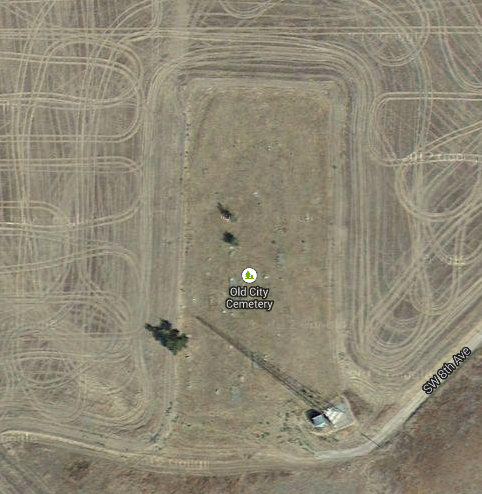 Surrounded by open areas and looks like maybe a cell or radio tower.

Looks like the road up to the cemetery is gated, meaning no car access but someone can walk up.

He has a website page trying to debunk the photo: UPDATE – Cemetery Mystery Still Unsolved
edit on 5-8-2013 by OneisOne because: add link & additional info.

As for it being a finger, I was like "hey that's a good point, or just a person walking across" afterall, there is a solid amount of time to get out there for the shot.

A few things worth note: There appears to be actual "legs". If you look at the enlarged photograph, you can see a small triangle of light between what appears to be the legs. In addition there is a small, semi-vertical slit of light in the forefront of it, that -might- be from an "arm" swinging forward, and the light being captured between it. Finally though, the head and neck are distinctly shaped. The "neck" protrudes forward and the head rises sharply. You can do this, and in walking gives you a distinct... "trudging" appearance. However: The neck is fairly enlongated, and the head rises sharply. In addition the front of the head is extremely flat, and matches the shape of the tree in several points. Where the bottom of the "neck" meets moves forward and then rises vertically, and the slight concavity of the front of the "head" is odd too. It literally appears to match the tree shape.

posted on Aug, 5 2013 @ 11:58 PM
link
I don't think it's a hoax but i'm not buying it's a ghost either.
I'm not buying it's a person walking up then back out of the frame in 30 seconds
because to me it does not resemble an actual person.
For me,
I like to know the shutter speed and his exposure settings.

The image seems to extend from the tree where the branch was cut.
there is motion blur around and even through the so called leg of the object.
to me this is a camera artifact capture.
this could be a bird and do to the camera settings this is what was captured do to long exposure.

I think I would set the camera up again at the cemetery and change some camera settings.


Go back at the same time of night and start your time-lapse again then go over to that tree and start walking back and forth, it will capture you as a blurr. Holder your beer up as if your saluting and you'll get the same picture. It could even be the handstand, either way it was captured this way because of the lack of light so you need longer exposure (lens open long enough to capture enough light to see everything)
edit on 6-8-2013 by WanderingThe3rd because: (no reason given)