posted on Aug, 5 2013 @ 09:48 AM
link
A Dorset man noticed some strange lights in the sky when he stopped at a local beauty spot, he was able to get a couple of pictures but I will admit they are not the best, still it is interesting, I mean he went to the trouble of contacting his local newspaper, he said that other people noticed the lights and had also stopped to look at them, he says that he has asked a few people and checked it out with the army but noone seems to know.

Mark Lichtensteiger snapped the pictures when he stopped at the beauty spot overlooking Zig Zag Hill. He said: “At first I thought it was some sort of helicopter display or formation but when the lights disappeared there was absolutely nothing there. “They came back on and then kept flashing on and off, all at different times. “There must have been five or six lights, which were all stationary in the sky.”
Mr Lichtensteiger, of Gillingham, said he was ‘baffled’ by what the lights could have been.

“I’ve asked a few people, and even checked it out with the Army, but no one seems to know. 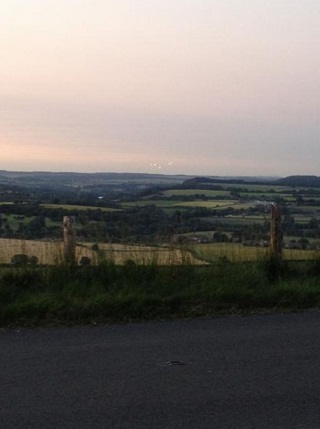 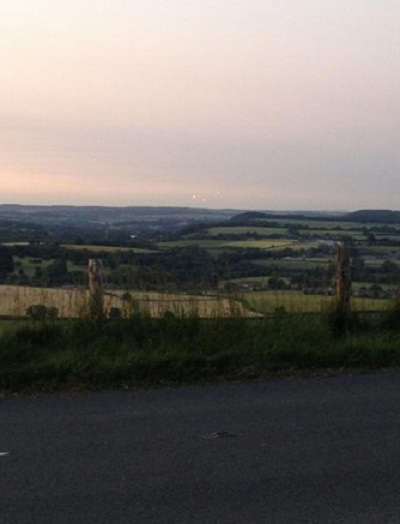 Here's hoping that some of the other people who saw them have some better pictures they could put online.

posted on Aug, 5 2013 @ 10:22 AM
link
Hum, saw another photo here the other day with similar....the conscensus was reflections I believe, or lense flare?

posted on Aug, 5 2013 @ 10:27 AM
link
I have seen this thing of lights floating in formation over fields, one night in 1998 I an my mates see 3 small bright lights hovering about 5 ft above some corn fields, it was Aug time.
Well in the morning the farmer found his field of wheat had a a strange patten in it, but it was best viewed from a Plane in the sky which his mate took him up in.
So was this event reported here in a field of wheat or Corn area too I wonder?
Well our viewing made TV and Papers in Devon within hours, it was never put down to a hoax as radiation was found in the patten the ball lights made.

posted on Aug, 5 2013 @ 10:28 AM
link
Unfortunately he doesn't give a date for when this happened but judging by the picture and after a search of the area I believe that there is a possibility that it may have been something to do with the local Compton Abbas Airfield .


They do look similar to reflections that you would see on photographs.

But that would make the guy out to be a down right liar, he does say that other 'passers-by' stopped to look at them. Also why go to the trouble to ask the army?

ah well, I guess we wont know unless more pictures surface, if there are any.

I hate it when people do this

Suppose she still lives there?

posted on Aug, 7 2013 @ 11:02 AM
link
Interesting, but you just can't see enough in the pics to tell if it's something mundane or something unusual. Like others have said: Hopefully some one has better pictures of it.

They do say this, though:
“At first I thought it was some sort of helicopter display or formation but when the lights disappeared there was absolutely nothing there.

“They came back on and then kept flashing on and off, all at different times.

“There must have been five or six lights, which were all stationary in the sky.”

Hot air balloons, perhaps? That's one thing that fits the description very nicely. In low light, they would look like lights that are only there when the burners are engaged and could easily appear stationary in the sky in low wind and at a distance.