posted on Aug, 5 2013 @ 09:42 AM
link
The business has been around since 1949 with the same name but, because some oriental special interest group complained about the name, the owner went and changed it. Now the community, upset that political correctness has changed a local landmark have stopped doing business there. 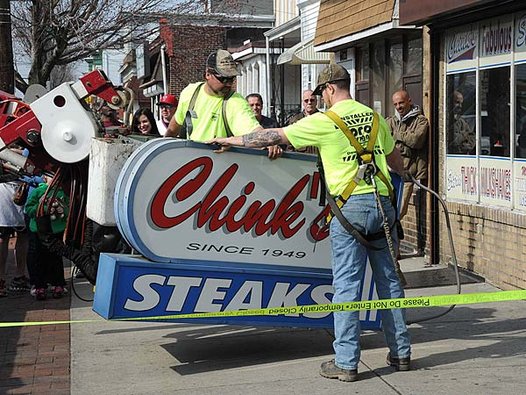 Joe Groh isn't laughing. Four months ago he did the right thing. Now he's paying the price for it. Groh is the owner of Joe's Steaks + Soda Shop at 6030 Torresdale Ave., and if that doesn't ring a bell, here's the name it used until March 31: Chink's Steaks, a Wissinoming landmark since 1949.

I doubt many, if any, of Chink's customers connected the name with a racial slur. The steak shop was named by founder Sam "Chink" Sherman, who got the nickname when he was a kid due to his almond shaped eyes. You can argue whether his friends meant it as an Asian slur or a sidewalk description. America was, rightly or wrongly, less sensitive about such things then.

When Groh, 50, announced his plan to rename the restaurant - he has worked there for 35 years and bought it from Sherman's widow in 1999 - there were two explosions. The first was in the media. The little steakshop never before received so much attention. The second was backlash from some longtime customers who hated the name-change, calling it a surrender to political-correctness. They have a point.

His business has slacked off by 15% since the name change and the neighborhood has circulated a petition to go back to the old name. Most of his business is from outside the neighborhood but, the local traffic he used to count on has died down considerably.

The funny part is some people continue to buy their steaks there despite their feelings about the name change.

A little old lady, maybe 75, comes in with her son and daughter. She says to Groh, "You make me sick," orders a cheesesteak, sits down, eats it, then walks out telling him, "You still make me sick."

As long as he gets your money, he doesn't care how your feel about him.

IMHO, if he was gonna change the name, he should have done it when he first bought the place. If he kept the name because of its history in the neighborhood and familiarity among its customers, he shouldn't have alienated them some 14 years later to appease some special interest group.

Most people thought it was just a funny sounding name for a steak shop. I doubt many really thought of it as an ethnic slur. Who buys cheese-steaks from an oriental shop anyway?