Alien obsession because of a 1979 sighting/Post your favorite daytime UFO pic or video.

posted on Aug, 4 2013 @ 10:24 PM
link
When I was 8, my cousin and I saw a classic saucer. Then 2 saucers in the same spot after the first disappeared. He took polaroid pics. Don't ask, I wont post them. I couldn't deal with dozens of experts commenting on how fake they are when I know they are real. This was in the South Carolina mountains in 1979. That being said , SAUCERS ARE REAL!
So, whats driving it ? Military? Alien? remote control? I wish I knew.
Later in life after the internet and some old Sitchin books my cousin gave me, the same cousin that was with me during the sighting, I started reading and watching EVERYTHING UFO related. From abductions to cattle mutilations to like 24/7 for a few years. I became obsessed with aliens. I still to this day watch vids of personal accounts of abductions, atleast the ones from people that seem descent and truthful.
I have also along my journey come across many many hoaxers as all of you have as well. Billy Meier was probably the biggest disappointment out of most of the hoaxers. I have watched so many UFO vids that I cant bear to watch another night time video. So I am asking for your favorite daytime UFO video or pic, vid preferred. AND PUHLEEEEASE NO BILLY MEIER VIDEOS you trying to be funny LOL.
Do I Believe ? I think I do. Heres why:There are too many people reporting seeing them. NASA videos, military videos, civilian videos/pics. Ancient paintings with saucers and lots of them. My own sighting. The fact that other people saw the saucers, not just where I was but in a tobacco field a few miles away that same summer. Some of the astronauts sure believe in the existence. Worldwide accounts and LOTS of them.
Im gonna leave it as a YES I believe and a reminder to post you favorite daytime sighting. Thanks and no, I wont post the pics. My cousin is now a crackhead , hje has them and I cant get them. He did not do drugs when we were 8 and neither did his camera.


The ones I saw weren't too high. The crappy polaroid shows the dome on top and the saucer is dipped down ,sitting not horizontal. it was a classic saucer, maybe 25-30 feet across. We were actually messing around with some horses and they got spooked. Its when we looked around that we spotted them/it in the sky. One was there, it disappeared and then 2 appeared in the same spot. No sound.

posted on Aug, 4 2013 @ 10:56 PM
link
Ok i'll bite.
This pic was taken 2 summers ago from a friend that after I asked for more info stopped talking to me.
Was it a hoax or was this person genuinly scared?
Pic was taken on her farm in Chesaning michigan.
I am more than willing to share the original photo that is larger and can be used for exif data. 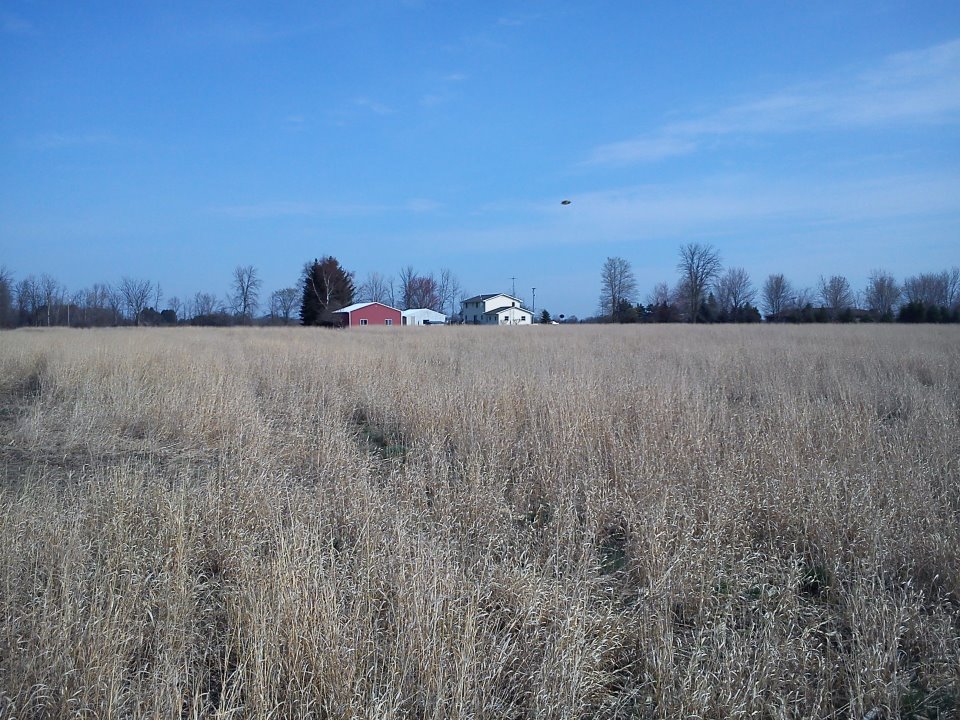 
Thought I'd add this from the analysis...


There is evidence of finite object motion blur in some frames where stationary background detail is in focus. A geometric composite analysis of all images supports the view that the UAP’s three-dimensional form is not circular in planform but rather a blunt-cornered isosceles triangle with flat bottom and convex upper surface. The object remains unidentified at this time.

So it was triangular although most would report a classic "saucer" shaped object.
edit on 4-8-2013 by FireMoon because: Add details


How about posting it to a photo bucket? I would like to get a closer look at this.

This was in the South Carolina mountains in 1979. That being said , SAUCERS ARE REAL!


Was it daytime or night? The one I saw on the west coast was around the same year and at night. It was blue. Since then I too have been kind of obsessed, looking for more...

One of my favorites...

posted on Aug, 5 2013 @ 02:37 PM
link
Hey sorry for no pic. I just wanna warn you guys something. I did some research on aliens, abductions, UFO's, etc. They came to me. They communicated with me telepathically, banged on my window, I saw a flying saucer, and when I was trying to sleep I heard a loud high pitched voice say "you will be killed". I am not afraid because I am a catholic and I feel protected by the Holy Spirit and God. I am going to go under hypnosis soon. Would you like me to tell you how it goes ?

There is no way of knowing that they are not faked of course, but interesting photos nonetheless.

posted on Aug, 5 2013 @ 08:21 PM
link
'There is no way of knowing that they are not faked of course, but interesting photos nonetheless.'

Genuine question. Is there really no way of definitively proving they are fakes? I just wonder because so many claim these fakes or sometimes a photo is said to be 'Proven hoax' but if there is no way of 100% proving that so , how can anyone possibly state they are 100% fake?
I thought there must be some sort of software these days that could prove that pixels were changed etc

posted on Aug, 5 2013 @ 08:29 PM
link
Yeah kinda like the Jerusalem ufo, deemed as a fake and maybe it was BUT there was a sighting filmed on the local news in Utah the day befor and it looked 100% THE SAME thing.........hows that possible,,the lights counted down and everything exactly the same.

posted on Aug, 5 2013 @ 10:25 PM
link
I like this video since it is a collaboration of video sightings, and it did get pretty viral on the internet. People have deemed some of these videos fake, and yea possibly some of them. Others how ever, well its believe or not.

The California Jan, 6 2011 at 6:39 is my favorite out of all of them. As for the vapor being made from the nuclear powered fairies, seems like the craft is getting friction from the air.
edit on 5-8-2013 by Specimen because: (no reason given)

posted on Aug, 6 2013 @ 10:47 AM
link
I don't know whether your story is true or whether you're mistaking a conventional object for something otherwordly, but I'll say the reason ufology doesn't die is because people see things they can't identify. WHAT they see is a matter of conjecture and the issue persists.

It could be that this is a form of mass-delusion or mass-hallucation in the sense that when people see something they can't identify they immediately associate it with what they know. And what they know is linked to the overall mass of people they connect with in their world. Ufology has mass appeal and is a topic commonly known by people. It'd be the first thing people think about if they see something unidentified. This might possibly distort their observational powers.

700 years ago in Europe a person might think they're seeing an archangel because that's what unidentified things were. They were a sign from heaven. They were supernatural.

But given all we know now about the universe, is it improbable that a more advanced civilization might live on an outpost in our solar system or that they've sent probes here that're watching developments on Earth? This might be somewhat like how university professors and their students will go on paid expeditions where they collect information about something and present it in a science journal. Often our navy will work with these kinds of groups. It's not unfathomable that somehow ET's or other things like them are living in (or visiting) our solar system on an observational mission.

Could it be that our government does indeed know about them? Perhaps they don't want us to know the details for different reasons. Maybe it's best that it remains this way for the time being.

What's the simplest explanation for all this? Occams Razor:


The principle that entities should not be multiplied needlessly; the simplest of two competing theories is to be preferred


What explanation can suffice to explain ufology with the least number of "entities"? Given our newfound knowledge of the universe, I think it's hard to say what hte simplest explanation is. This is why the Fermi's Paradox is so important: Where're they? It's not unfathomable anymore! However, there's a lot of reasons to believe that since most witnesses are mistaken and because humans are popularly irrational, especially in crowds, maybe the whole ufo phenomena is delusion.

Many years from now we will know whether ufology was a myth which had its source in delusional thinking and/or crowd insanity. One way or another, we'll know. Just like how we now know there were no leprechauns or no goblins or no archangels. There's no evidence for those things. If tomorrow they unearth a lephrechaun skeleton or they discover 1,000 year old dragon remains then that could change, but by and large, most myths are myths because we know they're not real. Or should I say that science should not rely on the fact that you can't prove a negative. In other words, science should not assert fairies or god or zeus exist because we cannot prove they don't. It's like if I say our universe exists inside a pizza box and nobody can prove me wrong, so I'm right!
edit on 6-8-2013 by jonnywhite because: (no reason given)