Building on the excellent foundation of standards states have laid, the Common Core State Standards are the first step in providing our young people with a high-quality education. It should be clear to every student, parent, and teacher what the standards of success are in every school.

The Common Core State Standards Initiative is a state-led effort that established a single set of clear educational standards for kindergarten through 12th grade in English language arts and mathematics that states voluntarily adopt.

Note the unequivocal statements that these standards were initiated/led by the States. Later I'll demonstrate that these are NOT the state-led initiatives they are claimed to be; that they are indeed standards dreamt up and (illegally, I might add) forced down the gullets of the states through the guile, coercion, and bribery of the Federal Government, the Gates Foundation, state trade associations, and—of course—those corporations who stand to reap billions of our tax dollars in payment for our own enslavement. What it really amounts to is a federal "unfunded mandate" paid for by those very states who, through greed and stupidity, buy into this "collectivist" s—hole. (Skip ahead to the 3rd video to learn these key facts.)

But first allow me to introduce you to the key "educational" concept: Whole Brain Teaching.

Although it begins in Kindergarten, here is an excellent demonstration of a 3rd-grade class being indoctrinated in the technique for the first time:

In the event that that wasn't just quite puke-inducing enough, check out what it looks like by the 7th grade.

Now, just in case you're one of the slug-a-beds still fuzzy-brained from your long slumber, who can't quite fathom how this might be adapted to the NWO plan of complete domination through indoctrination

Jesus warned his followers of this trap.

"I send you forth as as sheep in the midst of wolves: be ye therefore wise as serpents, and harmless as doves." (Matt. 10:16)

Because the serpents are out there. We have to be smarter than we have been. We have to identify and outsmart the serpents or we and our children will live without liberty under the collectivist banner of equality. It’s that simple. Right now, it’s called social justice. Proponents of social justice make it sound like compassion, steering clear from the pesky concepts of "individuality" or "freedom" or "local control" that the Founding Fathers bled for....

By the way: I'll be back after I finish some chores. Frankly, I'm not here to debate this if you don't want to believe it. You won't change my mind, and it's unlikely I'll change yours. However, if you're interested in further research, there are many thousands of sites in support of either argument.

posted on Aug, 4 2013 @ 05:26 PM
link
S&F for bringing this forth. My sister, mother-in-law, cousin and several friends are all teachers so I have been aware of this for awhile. They are furious over this (Some of them are even unabashed liberals) and can see it for exactly what it is - compliance exercises!

Like Moochelle's school lunch program, this will not last. We're already lobbying our local school district to dump it! This needs to go viral!

posted on Aug, 4 2013 @ 05:33 PM
link
I can't watch the vids, but I know good teachers who are just distraught over this. They realize where it's headed and better educated kids is NOT the end game. 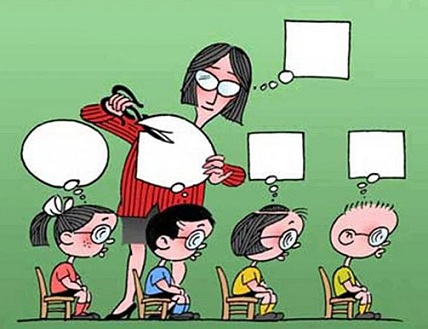 H.L. Mencken• "The aim of public education is not to spread enlightenment at all, it is simply to reduce as many individuals as possible to the same safe level, to breed and train a standardized citizenry, to put down dissent and originality. That is its aim in the United States, whatever the pretensions of politicians, pedagogues and other such mountebanks, and that is its aim everywhere else."

Bertrand Russell• "What's the difference between a bright, inquisitive five-year-old, and a dull, stupid nineteen-year-old? Fourteen years of the British educational system."


This from a teacher. Teachers will be accepting all the courseware on this to qualify for the funding stream attached but will not be presenting it to their students. The teachers in the area are all giving the roll-your-eyes, ya-right, when they get in a teachers room conversation about it.

You DC liberals think you can change what the teacher actually puts forward to their students just because you say so and attach a financial bribe? Tell me you aren't that stupid a 2 dimensional thinker in our 4 dimensional world (actually 11 dimensions according to "The Elegant Universe").
edit on 4-8-2013 by tkwasny because: (no reason given)


I have six teachers in my Family. Some play the game, others dont.

But they all know this is happening, and has been happening for a very very long time.

I swear, children shouldn't be left with some people for 5 minutes, let alone all day.

posted on Aug, 4 2013 @ 06:20 PM
link
What we have here is
fear mongering by the very money
that gave us the destroyed education system
we have right now.
They are scared
they are going to loose access to the money.

Here is the skinny on what "The States" are doing to us, while vilifying the Gates Foundation.


30k views
People are quiet in the audience,
He exposes major corruption in the state education budgets.
the truth is not popular.
"The guys at Enron would have blushed." -Bill Gates

Where are the results analysis?

Here take a look at the counter argument.


2.6 million views
Khan is achieving 100% math literacy where his program is implemented.
The truth and the future are gaining steam.
"I think what you have seen here is the future of education". - Bill Gates

1) They slam Bill & Melinda Gates foundation, without giving reasons. Just using a tone to imply that they are bad cause they have money and we shouldn't trust them.

2) They speak like they are defending the states, but fail to acknowledge that the Department of Education has already scooped the states authority in education.

3) She says "Content standards that cannot be changed by the states, cannot work in the long run" Thus trying to fit the Gates foundation with a noose more aptly applied to the very unioned interests the spokesperson represents.

4) at Timestop 5:00 - 5:03 she confesses her real motives, while trying to accuse others of the same thing. "There is a great deal of money to be made at the educational trough"

5) See the Bill Gates "State Budgets" video above for why they are attacking the Gates Foundation this way.

Bill, Bill, Bill...
Why, oh why, don't Americans understand you my boy?


How many Millionaires did Bill Gates create?

The ensuing rise of stock in the company's 1986 initial public offering (IPO) made an estimated four billionaires and [color=gold] 12,000 millionaires from Microsoft employees.


And how many Millionaires did Steve Jobs create?

When Apple went public, it generated more capital than any IPO since Ford Motor Company in 1956 and instantly created more millionaires [color=gold] (about 300) than any company in history. 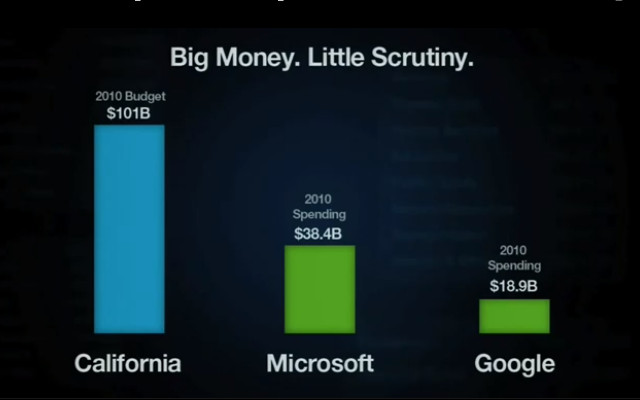 Tech companies are constantly analyzed,
and we hear about it.

Where is the Main Stream media on State budgets,
why so much silence on the topic.

The Gates foundation is accused of being Big Money,
but compared to the State budgets?


This is why I hate being dragged into debates on the Internet.

It's beside the point that the Federal Government has already encroached into authorities clearly belonging to the states:

"20 USC 1232 Sec. 1232a
No provision of any applicable program shall be construed to authorize any department, agency, officer, or employee of the United States to exercise any direction, supervision, or control over the curriculum, program of instruction, administration, or personnel of any educational institution, school, or school system, or over the selection of library resources, textbooks, or other printed or published instructional materials by any educational institution or school system...."

I also don't care how many millionaires Bill Gates has created. There are plenty of threads to be found here and across the WWW concerning the global depredations of the Gates foundation. They're hated for good reason, and the fact that someone doesn't break it all down every time they're mentioned is not the problem at hand.

I also don't buy the argument there were already plenty of pigs at the troughs of the States' educational organizations already. Those are problems to be worked out by the states in question, and not just wholesale transferred to another bunch of greedy hogs at the hands of the Feds.

If you love the Gateses' and the Feds so much, there's plenty of room among these forums to make your own threads about them.

here's just 3 points of their plans...


Infiltrate and take control of one or both political parties in the U.S.

Use technical decisions of the courts to weaken basic American institutions by claiming that their activities violate civil rights.

Get control of the schools. Use them as transmission belts for socialism and Communist propaganda. Soften the curriculum. Get control of teachers associations.

THE COMMUNIST PLAN TO DESTROY AMERICA FROM WITHIN

read the article and compare the progress from the 1960's up to right now.

"The worst government is the most moral. One composed of cynics is often very tolerant and humane. But when fanatics are on top there is no limit to oppression."

"The urge to save humanity is almost always only a false-face for the urge to rule it."

Thanks for the reminder....

Originally posted by kozmo
S&F for bringing this forth. My sister, mother-in-law, cousin and several friends are all teachers so I have been aware of this for awhile. They are furious over this (Some of them are even unabashed liberals) and can see it for exactly what it is - compliance exercises!

Like Moochelle's school lunch program, this will not last. We're already lobbying our local school district to dump it! This needs to go viral!

I really hope you're right. My main concern is not that people aren't waking up to what's going on, but that there's so much of it that we have to deal with it one narrow issue at a time. The lockdown is just about complete; if we don't start pushing back hard, our kids will be the real losers....

Originally posted by Maluhia
I can't watch the vids, but I know good teachers who are just distraught over this. They realize where it's headed and better educated kids is NOT the end game.

You said a mouthful there. Boy, it's so refreshing to see that ATS is no longer considered a bunch of basement-dwelling tinfoil-hatters. There are real people here....


I hope you're right. But I also realize they're just getting started. Right now it's only a couple of "harmless" subjects; but as the third video points out, they have much bigger plans. I hope defiance and push-back are enough....


I realize this has been going on for awhile. Please see my response to lernmore, below.