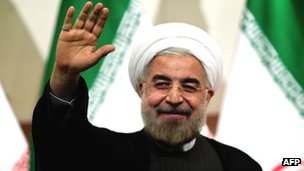 Hassan Rouhani is set to officially replace Mahmoud Ahmadinejad as president of Iran.

Mr Rouhani's election will be endorsed by the country's Supreme Leader Ayatollah Ali Khamenei at a ceremony in the capital, Tehran. The cleric, who won the presidential poll in June, has promised reform and to end Iran's international isolation.

While his term officially starts on Saturday, his public inauguration will take place on Sunday. The 64-year-old is a former nuclear negotiator for Iran and was an Islamic activist before the country's 1979 Revolution.


Well it's official sports fans. Iran has a new leader. I wonder if he'll handle things differently? Any bets on how long before he gains headlines by saying something not so Kosher?

This will be interesting to see how he separates himself from the path and legacy of Mahmoud Ahmadinejad. I've read the article and wonder how will he in your opinion ' end Iran's international isolation'?

posted on Aug, 2 2013 @ 09:28 PM
link
The Supreme Leader has the ultimate say what happens. How much power and influence does the Iranian president has and I do believe he'll be no different than the former president. Unless he tries to make his image more appeal to westerners like Pope Francis did with many non Catholics.

Hassan Rouhani declared that Israel was an “old wound” that should be removed from the Middle East.

Iran's Hassan Rouhani: Israel an 'old wound that should be removed'


New boss same as the old boss the only real puppet that can be confirmed.

As the Supreme leader runs Iran.


Meet the new boss, same as the old boss?


Trust me. The people of Iran would love to have some of the freedoms we have. Its the polices there, just as we have our problems here.

Will the US become like this in the near future?


“We love America!” gushed a former military commando, now a clothing seller, my first evening in the spiritual center of Mashhad. He was so carried away that I thought he might hug me, and although he acknowledged that his business was suffering greatly from Western sanctions, he said he blamed his own leaders. “I can’t blame America,” he said. “I love America too much.”

That was far from a universal view. I encountered many Iranians — especially in the countryside — who strongly support the Iranian authorities and resent what they see as American government bullying. But while Iranians are far from monolithic, one feature was ubiquitous: the warmth of Iranians when they discovered I was American.

Another difference from my last visit: People are more scared now. Iranians feel fairly free to gripe about their leaders, even within earshot of others, yet since the 2009 crackdown there has been a red line: anything approaching activism, including public criticism. One blogger is serving a 15-year prison sentence, and Iranians have been jailed just for giving interviews to foreign journalists. As a result, Iranians are more wary now of being quoted or shown in videos.

“Please don’t use the video,” implored a young man living near the Caspian Sea, after I interviewed him. “I want to have a future.”

posted on Aug, 2 2013 @ 09:57 PM
link
Wow... Talk about a true 'Time will tell' situation. He says all the right things by reading his profile and bio but his history speaks much differently of the man within. He's been active and in good standing with the Revolution since it happened in 1979. Which tells me he knew as much about how to be a team player to the Ayatollah Khomeini as he does to the current Ayatollah Khamenei. (Spellings are different..and the current one took his position in 1989. I checked.. really.. lol).

Anyway, he was also a Nuclear Negotiator who had a falling out with Ahmadinejad, but by virtue of the fact he's still in any form of politics, let alone the new President? He and the Ayatollah apparently got along well enough. That tells me he's a very dedicated "company man" for that system. Yet, he DOES talk a very good sounding game there.

I'll just hope for the best while expecting nothing to improve much. I'll be happily surprised to see him turn out more like his talk than his bio suggests.

Profile of the New President

posted on Aug, 2 2013 @ 10:50 PM
link
I believe there is going to have to be a major paradigm shift before anything truly changes. The people over there want freedom the same as we do and they are oppressed just like we are, more so even. This guy is just another puppet spewing the same lies as the last puppet was.

Originally posted by sonnny1
reply to post by SLAYER69

Hassan Rouhani declared that Israel was an “old wound” that should be removed from the Middle East.

Iran's Hassan Rouhani: Israel an 'old wound that should be removed'

The translation said... "There has been an old wound on the body of the muslim world for years as a result of the occupation of the holy land of palestine and revered al-quds. And today is a reminder that the muslims will not forget their historical right to stand up against oppression and violation".

Bibi is clearly distorting the meaning of those two sentences... the guy didnt even use the word "fight" - he was THAT careful with the words. I think the one who is again showing his "true face earlier than expected" towards the new president of Iran is actually that poisonous snake bibi that doesnt even give the man a day to check out the view of his new office and starts picking on the guy from day-1... whats the plan, to see if this guy breaks since the last one didnt? Maybe if he starts sooner with this one he'll be more successful and finally he manages to get the war hes been wanting for years... oh yea that and to drag the US with him - sorry to make the US to fight it for him (what was I thinking).

Of all the bullets in the world there isnt a lost one that finds bibi's head to put an end to at least PART of the madness... damn snake.
edit on 2-8-2013 by FraternitasSaturni because: (no reason given)


Im sure Net has his own view on it.

I gave the link. Take what you want out of it. The Supreme ruler isn't going to give up his power anytime soon. That's why he installs flunkies as Presidents. People with no Power. You do know this, right??


I'm not holding out a lot of hope concerning the new President in helping to end the sanctions and possibly bring peace to the region. Opening their Nuke sites to inspectors would go a long way towards that.

As others have said, I think that it is going to be same-o, same-o.

posted on Aug, 3 2013 @ 12:37 AM
link
I think he will be careful with his words and try to get some of the sanctions eased by calling for talks and openness on its nuclear program. Openness like the one Saddam and N Korea used to get what they wanted in the short term.

In the end, Iran gets nuke and US gets richer by helping neighboring nations get their own nukes.

posted on Aug, 3 2013 @ 01:07 AM
link
I don't see how this will change a dang thing. I recently read somewhere how he is going to keep some of the same "advisers" as his the last puppet. I mean it is Iran and Iran is a theocracy with a president to be the the face to the rest of the world. [I feel that is because the ahem supreme leader doesn't want to deal with his perceived lesser's] I mean they can put frosting and sprinkles on the garbage but it's still garbage. Same guys running the show and well Ahmadinejad did start going against the real power a bit towards the end. Only thing good I can say about that whole set up at least with Iran we can see the puppet masters.

posted on Aug, 3 2013 @ 02:01 AM
link
Stop all the posturing ! Give Iran a Nuke or two from Israel's stock pill .What would Iran do with them ? NOTHING ! They would do what they all do. Sit on them, and be part of the club. To suggest Iran would launch a nuke or give one to the alleged bad guys is flat out stupid ( they have signatures )
Nothing gained and Iran is no more.

The translation said... "There has been an old wound on the body of the muslim world for years as a result of the occupation of the holy land of palestine and revered al-quds. And today is a reminder that the muslims will not forget their historical right to stand up against oppression and violation".

Bibi is clearly distorting the meaning of those two sentences...


Reminds me of the statement that was attributed to Ahmedinejad... "Israel must be wiped off the map" or something.

Now watch how the Israelis and their supporters parrot this statement over and over again to make the case that Iran is out to get them.

posted on Aug, 3 2013 @ 07:20 AM
link
That nutter Ahmedinejad went around saying that dead Venezuelan leader Chavez was going to come again with the mythical Mahadi and turn the entire world Muslim. He's a religious nutter who bought into wild fantasies :shk: And Ahmedinejad was one of the terrorists who took over the US embassy in Iran all those years ago. Not to mention his insane comments about Iran 'not having any homosexuals to have a problem with' (paraphrase). All things considered. I"m glad to see him gone. He was a violent loon.

The new guy? Time will tell. I doubt anything fantastic will happen.
But at least whackadoo Ahmedinejad is gone.


To suggest that Iran wouldn't is naive at best.


A former nuclear negotiator for Iran and revolutionary activist? It sounds like we’ve got ourselves another ant-west, anti-Israel, Islamist hardliner puppet of the “Supreme Leader” to deal with.

I’ve said it many times…nothing is ever going to change in the ME.


He is already involved in another one of those "misquotes" about Israel being an open wound on the middle east and must be removed.

That aside he made a miraculous comeback in politics from what I have seen and is considered a reformer, so it should be interesting to see how it plays out. It seems the Iranian people are ok with the results, so hopefully this President will represent the people this go around.

I say actions speak louder than words, so let the man get to work and lets see where it goes.

Rouhani is a chance for some countries to persuade their policies differently. unless Rouhani himself can not do anything.
their focus will be inward.
he will be less controversial. and less connected with media.
and of course, you do not expect that presidents remain committed to all of their slogans, do you !?