In 2001, this guy got fired from a Residency program in Pathology. Now he's accused of murdering some of the folks who helped get him fired.

Twelve years later, Dr. Garcia is behind bars. He was charged in a Nebraska state court last week with the May 2013 murders of Dr. Brumback and his wife Mary Brumback and with the March 2008 murders of Dr. Hunter's 11-year-old son Thomas and Shirlee Sherman, the family's housekeeper. Omaha police believe that Thomas Hunter and Sherman, slain in the Hunter's home, were not Dr. Garcia's intended targets in the first pair of killings.

According to police, Dr. Garcia sought revenge against Dr. Brumback and Dr. Hunter for kicking him out of the CU pathology program. The firing had negative repercussions for him in a checkered medical career, factoring into failed attempts to get licensed in Indiana, California, and Louisiana and to complete a psychiatry residency program in the last state 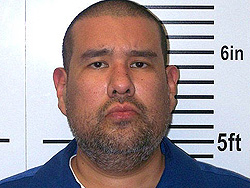