page: 1
31
log in
join
share:
ionwind
+5 more
posted on Jul, 30 2013 @ 09:03 AM
link
Most people think only humans have agriculture, but we know of other species like ants that care for and harvest fungus.

The smallest farmer known is the social amoeba Dictyostelium discoideum

This little critter eats a certain kind of bacteria. But it not only eats it, but also carries it to new locations as "seed corn". The bacteria is allowed to flourish, and is then eaten by the humble amoeba.

But this amoeba also carries a weapon, for a "guns and butter" approach. The weapon it carries is another, different bacteria. The second "gun" bacteria produces an antibiotic and antifungal chemical which does not effect the edible bacteria. It does however protect the edible bacteria by killing and preventing other organisms from competing with it on the same "farm land".

Biologists describe this behavior with terms like mutualism and altruism. But I think we should we tip our hats to the micro-farmers. They tamed the wild-west of that pond you normally ignore.

Sometimes I wonder about the microbes that "live with me" in and on my body - wonder what their 'societies' are like.

It's amazing to me how we are so tiny relative to the universe, so huge relative to some life forms, and so unaware of things that we can't see, hear, touch, feel, or taste..... to think of how, for example, a fly sees things, how a dog smells things, etc... we need "everybody" to keep life on this old planet a-goin'.....

yet humans are SO arrogant!!

I find it so freaky'n'fascinating that the closer we look or the further out, we see all kinds of repeating patterns and behavior in the universe from particles to animals.


I agree. And as Biigs said, the universe seems to follow repeating patterns like a giant fractal. Stretching outwards and inwards. We may never find the boundary in either direction.

posted on Jul, 30 2013 @ 11:23 AM
link
I didn't realize that that article was so interesting on science daily so skipped it. It's actually really interesting, S&F

Quick, it doesn't have a church, miniaturize some missionary's!

posted on Jul, 30 2013 @ 12:53 PM
link
And that right there sounds like how life moved from one area to the next on a microbiological level billions of years ago.

posted on Jul, 30 2013 @ 06:49 PM
link
Somewhere in the universe incredibly intelligent beings are discussing us in this very same context.

When I was kid, (ages ago, it seems) we would get pond water and look at paramecium and other tiny varmints through our Sears microscopes. Your thread has inspired me to go find the old microscope in the attic at my dad's house, or maybe buy a better one.

Originally posted by ionwind
Most people think only humans have agriculture, but we know of other species like ants that care for and harvest fungus.

Not just fungus, but Aphids as well.

Oct. 11, 2007 — Chemicals on ants' feet tranquilise and subdue colonies of aphids, keeping them close-by as a ready source of food, says new research. The study throws new light on the complex relationship between ants and the colonies of aphids whose sugary secretions the ants eat.

Scientists had previously established that certain types of aphids live in colonies where they are used as a food source by a neighbouring colony of ants. The ants have been known to bite the wings off the aphids in order to stop them from getting away and depriving the ants of one of their staple foods: the sugar-rich sticky honeydew which is excreted by aphids when they eat plants. Chemicals produced in the glands of ants can also sabotage the growth of aphid wings. The new study shows, for the first time, that ants' chemical footprints -- which are already known to be used by ants to mark out their territory - also play a key role in manipulating the aphid colony, and keeping it nearby.

When I was kid, (ages ago, it seems) we would get pond water and look at paramecium and other tiny varmints through our Sears microscopes. Your thread has inspired me to go find the old microscope in the attic at my dad's house, or maybe buy a better one.


Yup, me too. I remember being amazed the first time I looked at a drop of pond water under a microscope. It was just teeming with life of all kinds. Some seemed to me to have animal-like behavior.

Paramecium are elegant looking protozoa and swim around gracefully. They too have a weapon system. In the image below, a carnivorous didinium is attacking a paramecium. The paramecium has launched it's trichocysts, which are like harpoons, at the didinium, but has missed: 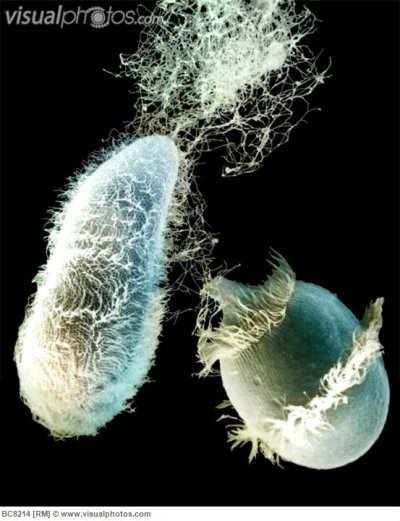 These are also single cell organisms without a brain or any nerve tissue, but they still exhibit complex behavior.


Reminds me of Monsanto.
We take a plant modify it and then place it to grow somewhere and introduce a chemical to kill
off the competition.
Limbo


JUST KIDDING and feeding some of the known "religion trolls".

Seriously though....
I found the article very interesting.
I didn't have a microscope coming up but I would get the LARGE pickle jars from the country store.
I would use them to create ant farms. From Fire ants to Carpenter ants I would watch them farm and raise live stock.
It never ceases to amaze at how awsome God is.
edit on 31-7-2013 by Quadrivium because: (no reason given)