Obama's OFA August Agenda Change You Can Believe In

Yeah it's a Teaparty source so what?

So faux 'crisis' of healthcare,gun control,immigration' is more important than say 100 million Americans on Food aid, 47% of Americans working part time,where 4 out of 5 people in this country face near poverty, no work.

Healthcare that has killed jobs,gun control that kills jobs,climate change that kills jobs and the economy doesn't even rate the list of 'things to do'.

Be more stupid than you would have thought.

On Dancer,On Prancer, on Donner, and Bltizen we got's some fake issues to pass out before the Christmas in 2016.

Organizing for Action change you can believe in cause hell all most people in this country got change left in their pockets.
edit on 29-7-2013 by neo96 because: (no reason given)


So how come OFA never warranted the scrutiny of the IRS? Some animals are more equal than others, indeed.

All fascism is leftist, and today's leftists are entrenched enough to operate openly with impunity. After all, who will point out their destructive agenda? The vast majority of media and gatekeepers of popular culture has the same agenda as those who mean to control every aspects of our lives.

Collectively, they focus Alisnky-esque attacks on anyone bold or stupid enough to point out the nature of their intent, and the more well documented and fact-based the exposure of the left, the louder shouts of "Dangerous, Extremist, Racist, Nut Job Right Wing Terrorist!" are.

Its nothing more than Mob Rule by the mob of Useful Idiots who are Ruled by those who disguise Slavery to the State under the mask of Compassion.

So how come OFA never warranted the scrutiny of the IRS? Some animals are more equal than others, indeed.

Organizing for Action (OFA) is a nonprofit social welfare organization and community organizing project in the United States which advocates for the agenda of U.S. President Barack Obama.[1][2] The organization is officially non-partisan,[2] but its agenda and policies are strongly allied with the Democratic Party of which Obama is a member. It is the successor of Obama's 2012 re-election campaign and of Organizing for America, which itself succeeded Obama's 2008 campaign.[3]

Founded after President Obama's re-election, the group seeks to mobilize supporters in favor of Obama's legislative priorities. OFA is registered as a 501(c)(4) organization[4], which may advocate for legislation but is prohibited from specifically supporting political candidates.[5] OFA is organized as a grassroots organization, with local chapters that decide which issues to organize around.

Because it represents the party of never do anything wrong.
edit on 29-7-2013 by neo96 because: (no reason given)


Yes We Can ..............Destroy your Ability to Earn a Decent Living as a Hard Working Middleclass American and Eventually Force you to Apply for Goverment Sponsored Welfare.........


Yes the, Organizing for Action will be pushing Obumas agenda for him. He's like their Christ I think.
They need to get his agenda out there to save America from it's self


That IS going to replace my BUCK OFAMA bumper sticker!!!!!! Thank you!1

“I’ve got a little over twelve hundreds days left in office. I am going to spend every waking minute of every one of those days thinking about, and then acting upon, any good ideas out there that are going to help ordinary Americans succeed,” Obama said

He'll find out the 'good ideas' and then act to squash 'em.

That's all he's been doing

Remember he said "You didn't build that"


OFA what its really about: 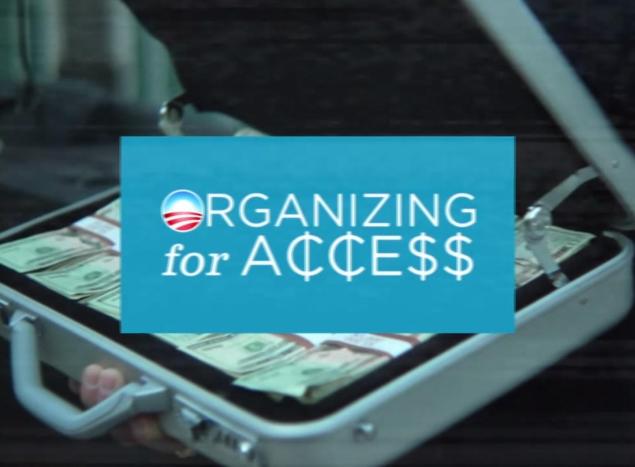 How odd, there is nothing about the economy in there now?
I guess that is not high on OBAMA's agenda, well maybe it is in reverse?
Maybe he wants an America in decline?!

Nevermind the out of control IRS, so corrupt yet no word from Obama
on it being a serious matter, he knows nothing!

$70 million in bonuses to IRS agents; hundreds of millions of dollars of contracts granted to a business owner with a friend inside the agency: agents abusing IRS credit cards to pay for such things as diet pills, romance novels and even online pornography; and the shocking revelation that the office of the chief counsel – one of only two Obama appointees in the agency – may have been directly involved.
newsbusters.org...

Nevermind Benghazi, its in the past, and besides Hillary said what difference does it make!


Well here is some good news:

Accuracy in Media (AIM), along with some of the country’s top retired military officers and national security officials, will hold a press conference on Tuesday, July 30, to launch the Citizens’ Commission on Benghazi. The press conference is at noon in The Zenger Room at the National Press Club.

The newly formed group will focus on resolving some of the many questions surrounding the September 11th attacks last year on the U.S. diplomatic mission in Benghazi, Libya, and the nearby CIA Annex, that remain unanswered to this day.
canadafreepress.com...

I doubt we will see any media coverage on that, as The Weiner is on the stage right now,
make one wonder if they are not just using him as a tool.
edit on 30-7-2013 by burntheships because: (no reason given)
edit on Tue Jul 30 2013 by DontTreadOnMe because: Reaffirming Our Desire For Productive Political Debate (REVISED)

Yes We Can ..............Destroy your Ability to Earn a Decent Living as a Hard Working Middleclass American and Eventually Force you to Apply for Goverment Sponsored Welfare.........


Right!!! Now just how are they going to accomplish that you may ask?
The W H is creating what is called, The Nudge Squad, Nudge as in to get you to do their bidding with out you really knowing they nudged you into it, or made you think that.
Sounds kinda like Mind Control of the masses!
Soon you'll be thinking that Obuma is the best POS ever,,, I mean POTUS ever.


The federal government is hiring what it calls a "Behavioral Insights Team" that will look for ways to subtly influence people's behavior, according to a document describing the program obtained by FoxNews.com. Critics warn there could be unintended consequences to such policies, while supporters say the team could make government and society more efficient.


"Ultimately, nudging ... assumes a small group of people in government know better about choices than the individuals making them."


"Let's say we want people to engage in some healthy behavior like a weight loss program, and then start automatically enrolling overweight people in weight loss programs -- even though they could opt out, I'm guessing that would be viewed as offensive ... a lot of people would say, 'I didn't ask for this, this is judging who I am and who I should be." But Laibson added that there are very real benefits to some "nudge" policies -- such as one that increases the number of people registered as organ donors by making people decide when they apply for a drivers' license. Read more: www.foxnews.com...

YUP!
Obuma my never leave,,,, he'll have you owing your life and livelihood to him and the Government.
The, Organizing for Action and the Nudge Squad will be the tools the push the Governments agenda on the Weak Sheeple!


and the AWARD FOR OUTSTANDING ,,double Entandre,,"make one wonder if they are not just using him as a tool. "

deserves a login,,and a flag.