She was sitting in her car during her lunch break of the day. Today she just wanted to be alone... and didn't feel like being bothered by the crowds and hum of activity so alone she sat and ate and that is when she noticed the Van.

It was a bit unusual thing to see she thought... not the norm. As she sat their eating... after about a minute or two she noticed two men exit the van... both dressed similarly as in uniform. There were no identifying marks on the uniforms or the van itself. They walked across the parking lot and went inside the taco place and appeared to also be grabbing a bite to eat.

It was really nothing too unusual she thought.. it just kind of grabbed her attention. & she just could not stop looking over at the van. So feeling in a bit of an investigative mood she decided to get out and take a closer look. This grey van sitting in the parking lot just consumed her attention at the moment.

She walked through the parking lot trying not to appear as if she were approaching the Van... just wanted to walk by and look at the plates and see if she could recognize any markings. Loving a good mystery and all her mind was already conjuring up and thinking double time on all the possible reasons and purposes for the Van's presence and what the two men might be transporting. Was it a crazed convicted killer being transported and being held in cuffs in the back... Why were their no markings that she could see... That in itself was just so perplexing to her mind.

She could not see through the windows from her vantage point because they were tinted just enough so that any attempt at viewing inside from her distance definatley wasn't going to happen. She was going to have to attempt to get closer. This made her a bit nervous because she couldn't think of a good reason for an excuse to give the two men for her snooping if they were to return from their food endeavor while she was trying to peak into the windows. She figured she oughta have a good excuse in store for explaining just in case. So she sat and thought...Do I tell them I thought I saw a for sale sign in the window, or lie and say I thought i saw a kitty cat run under the van and I didn't want them to drive away and accidentally run over it... yes yes that would be an awesome cover story... Ok now to take a peak.

She strutted confidently over toward the van... yep all's good here... I'm going to rescue that kitty cat she convinced herself. Afterall she had to play the part.. so her story would be convincing if caught red handed. Nope I'm not doing anything wrong... not me... little miss innocent over here. Everybody can look over here at me all you want... Yooowhoo... she whistled as she continued onward bound, Im Invisible & Innocent !

It was so unlike her to do of such a nature but she just could not get the van and what was inside out of her mind. It was a mystery.

Then all of a sudden she tripped and fell to the ground... some little pebbles that came out of no where caused her to slip and scrape her knee. Dernit... jump up real quick.. play it off and keep on trecking...she thought & just as she started to lift back up with the palms of her hands she looks over and here come the two men.
Dern it... she panicks ! Meow...

She jumps up and quickly darts back toward her car... Yep shoe came untied if they questioned her... thats all folks... nothing to see here... just my shoe she thinks. She gets into the car and takes a big swig of her water. Shewy that was close. Almost she thought... I was almost there. Dang it... sigh.

At the same time the two men approach the van and both walk to the door. They set the food down and then both approach the passenger side door. She notices both men are wearing holsters so she realizes that they indeed are securing something... she just doesn't know what. One stands alert while the other unlocks the door. Then the other returns to the driver side and unlocks his door. Neither man ever turns his back on their door. Both men stand at alert in their door ways eating their meals as if on high alert.. guarding that Van... Watching their backs!

Now she just knows she has totally missed out on what juicy little secrets are inside the van. She sits in wonder and thinks she could kill those little rocks. I guess today just wasn't my day to find out she thinks. Something unseen must of interveened she ponders... there was a reason those rocks jumped out at her... perhaps those little rocks saved her she thinks.

She looks down at the clock and see's the hours end is fast approaching and she needs to return to work or be late. So she starts up her car and off she drives back to the humdrum routine... Thinking and knowing she will always ponder the mystery of spectacles during her lunch that day... the lost opportunity and all... another day another day... 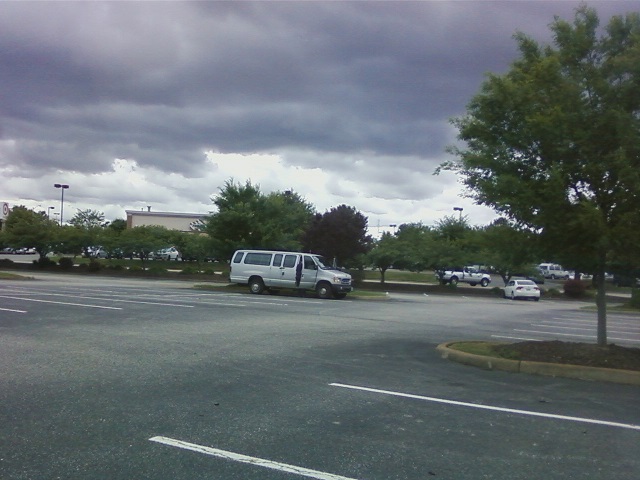 
Thank You... glad you enjoyed it
Just playing around is all... in my spare time.