posted on Jul, 28 2013 @ 01:04 PM
link
Iconic Ground Zero photo was nearly excluded from museum for being too 'rah-rah' American

Here I am starting another controversial thread, this is not a conspiracy theory subject, even though I can see it headed that way,
www.dailymail.co.uk... 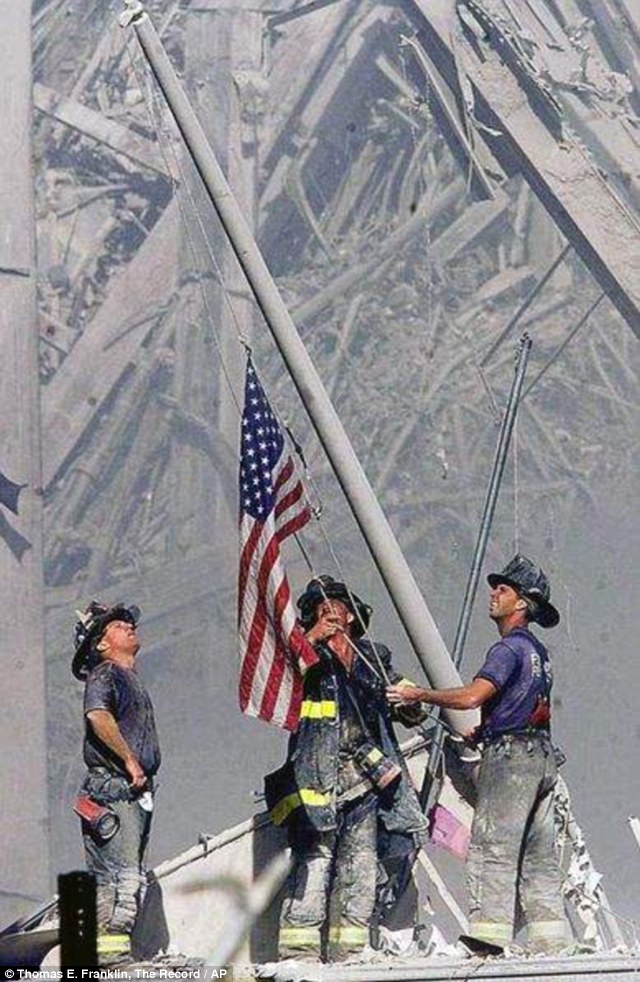 Yes?
No?
Considered too kitsch?

Art, decorative objects and other forms of representation of questionable artistic or aesthetic value; a representation that is excessively sentimental, overdone, or vulgar.

Trying to uphold what people want to believe in America amid ironic devastation of those very same values.

Remember when they tried 'altering' the picture to make it more ethical?
I'll see if I can find it.
They made one of the men black. Go figure.

I don't like the course our country is taking.
When did Patriotism and American turn into a bad thing??

ETA: I think it all started when Obama took office.

NEW YORK (AP) A statue based on the famous photograph of the flag-raising at the World Trade Center site is being criticized because the three white firefighters in the picture have been transformed into one white, one black and one Hispanic.

Some firefighters and their families say the 19-foot bronze is political correctness run amok and an attempt to rewrite history.

This is talking about the statue being 'politically correct' and being altered but I remember seeing the picture itself altered too.
Still looking for it......


Maybe this pic/video should get some attention?

And before you say it's chance, couldn't they have formed a circle instead?

posted on Jul, 28 2013 @ 03:20 PM
link
S&F
What concerns me is that this country is headed for a country-wide 9/11 economically, and very few people seem to "get it". The same crooks keep getting elected. I know this is an old cliche, but it certainly applies:
Insanity is defined as doing the same thing over and over again, and expecting a different outcome.

posted on Jul, 28 2013 @ 03:41 PM
link
How ridiculous. If you think it makes the entire event too "simplistic," then make damn sure the rest of the memorial portrays just how unimaginable this event was. I like the compromise of using it in a set of 3 photos. Nothing says that other views can't also be displayed (actually, I would find the memorial more credible if they included other views), but you can't leave this picture out. I find 9/11 to be just as shady as most on this website, but to even contemplate leaving this picture out is a disservice to your field and to history. Just because you might not like what happened in the past does not mean you can just forget it. You use it as a teaching tool to improve your reactions to things in the future.

Firstly its the daily mail....

Secondly what does it really matter the photo was used in the end so it is included.