How do we know Hastings,Manning,bin laden and Snowden are alive or dead?

Take hastings how do we know if he is still alive. No body was filmed and all we have is cremated ashes to identify him. They would have drugged a man put him into a remote controlled hacked car then blow it up with c4. People would think the charded remains are him but is a look alike. They then cremate "him" before the family could identify the fake double.

How do we know that the raid on bin laden's compound ever happened? Like Hastings there was no body presented to the public and the remains where disposed in the sea.

How do we know that Pvt Manning is not in a secret torture dungeon?

How do we know that former cia ed snowden is not in a secret cia blacksite outside this country? Maybe "snowden" is a fake alias/persona and was paid to spy on the NSA by the CIA and NSA sniffed him out. Is he in the process of being sheep dipped?

Manning and Snowden are alive, Bin Laden and Hastings are dead.


How do you know that?

Where is the proof.


The proof is common knowledge.


How do you know President Obama isn't an alien fish from the planet Oglashion that is 54 billion light years outside of our galaxy? Where's the proof against that?

For one thing it passes my first test of a conspiracy theory.

1) If it's a conspiracy no one should know about it.

And the way it seems almost laughable and is dismissed out-of-hand,
actually supports it's effectiveness in my mind.

My second test for a conspiracy theory is

2) How does this appeal to me on an emotional level.

And on this level it fails,
because it appeals very strongly, in a negative way.

It would be horrifying and terrible to be locked away somewhere and have the world think I was already dead, leaving me at the unlimited cruelty of my captors.


The second point is worth more consideration, in my mind.

First of all, to fake a death usually would require the cooperation of the person,
would it not?
If they, or any one, ever got away, or even got word out,
it would shatter what tiny remaining fragment of trust the public has in authority.

I'm reminded of the end of the movie Capricorn One
where one of the supposed-to-be-dead astronauts,
shows up at his own funeral
and blows the lid off.

The risk seems far too great.


In his case we have the testimony of his Father, but this is questionable as there is no evidence of direct dialog.

"He hasn't spoken to his son since April"

"I would like to have the opportunity to communicate with him."

So the question remains.

Unless he wanted to fake his own death, and
if that is the case then
LA County assistant corner, Ed Winter
would _have_ to be in on it.

So once again, I have to say
inconclusive, but unlikely.

The news states that he is being tried for Court Martial
at FORT MEADE, MARYLAND. And that the trial
has just concluded. If the judge sentences him
he may be able to receive family visitors in
the future.

It seems unlikely that he is actually dead.

posted on Jul, 27 2013 @ 08:53 PM
link
As for Julian Assange,
I'm afraid that I have to recuse myself in this matter
as I bear a personal prejudice to the case,
never having believed he was real in the first place. 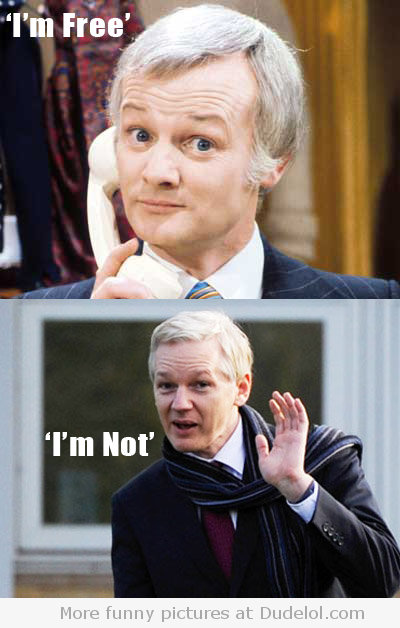 Haven't laughed so much since I heard on the radio yesterday that the Church of England invests in Wonga.lol

The truth is unless you happen to be in some kind of contact with these characters then you're never going to be absolutely sure whether they're dead or alive but you could apply that criteria of proof to almost anything you can't go and physically confirm for yourself.Sometimes you just have to take things at face value or that way madness lies !!

There appears to be more than enough evidence (slightly different definition than truth ) that Bin Laden and Hastings are dead. First hand accounts, pictures, death certificates, etc. So, for me, that is ample enough evidence to believe they are dead.

As far as Manning and Snowden, again, plenty of video evidence, written testimonials from Mannings' attorney and the Guardian reporters for Snowden, video's. press conferences from Russia. Again, ample evidence for me to indicate they are alive.

Of course, some people will believe what they want, regardless of the evidence. At that point, the discussion ends, unless of course 'new' evidence should surface that could change the story. Until then, the current evidence speaks for itself. The burden to prove otherwise lays on those who wish to provide evidence to the contrary IMHO!! Peace!! ID!!