That being said, solar flares take on average, 3 days to get here, NOT 3 months.

The BS light is glowing.

BIN is site-non-grata around here.

I predict that DontTreadOn Me will be putting the killshot on this thread soon.
Unless they let it slide because another site was used as a source after they got it from BIN.
edit on 27-7-2013 by badgerprints because: (no reason given)


Originally posted by abeverage
Weren't links to Before it's News banned from ATS as a source?


you are not allowed to use 'before its news' as a source for anything here.
edit it out now, i say.


Why do so many seem unwilling or incapable of paying attention?

I know we all want to look like good, obedient little comrades, but Is it really so important you all need to quickly jump on the "OMG-- he mentioned BIN-- lynch 'im boys!" bandwagon before even bothering to check if BIN is linked in the OP?


One member mentioned before-it's-news and everyone freaks out. The guy who mentioned BIN is not even the OP! Did you look at the link? It's not BIN. OP didn't even edit his post-- so I know it was never BIN and you're all just knee-jerk emotional. Besides-- BIN is allowed if it is a secondary news source. Just no hot linking. At least, that's the final word I remember from the BIN thread.


How sad and ridiculous. And this is the second time I've seen this today. Happened in another thread where BIN was only mentioned, and people started jumping down OP's throat without even checking his links (which were not BIN)


Pathetic. And like I said in the other thread-- I guess it goes to show what some peoples' Standard Operating Procedure is like. Pay no mind to the facts, don't bother to check links-- just figure out something to get upset about and rant away...

By the way, for the curious-- after the poster above (first) mentioned BIN, I realized it was a good call and I checked. BIN does carry this story, but it was posted to BIN three days after the source in the OP. So as usual, BIN is just re-printing whatever garbage they find.


But some of you people seriously need to calm down, check links before whipping yourselves into a lynch mob, and oh, I don't know, let The Moderators moderate the board.
edit on 27-7-2013 by iwilliam because: (no reason given)


Here have some bar-b-que
as a token of my regret. 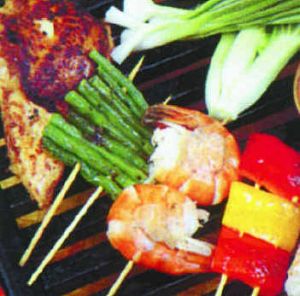 posted on Jul, 27 2013 @ 08:20 PM
link
chronicle.su IS a HOAX site. They are particularly enamored with Snowden because his name draws people in. Besides, Snowden had nothing to do with the long closed experimental group (remote viewing project) that came up with the Kill Shot prediction.

Everything on chronicle.su is completely fabricated and they exist merely to fabricate and perpetuate lies.


It is kinda crazy that Ed Dames predicted this would happen too. By remote viewing... I think he is starting to say comet Ison may trigger a killshot super flare..

By the way, for the curious-- after the poster above (first) mentioned BIN, I realized it was a good call and I checked. BIN does carry this story, but it was posted to BIN three days after the source in the OP. So as usual, BIN is just re-printing whatever garbage they find.


But some of you people seriously need to calm down, check links before whipping yourselves into a lynch mob,

Wow.
You're right.
We should have done our due dilligence before suspecting BIN wasn't the original source.
I put my pitchfork and torch away.

We were incorrect to assume.

My sincere and most abject apologies to the OP.

Since BIN printed the garbage after IC did, we could have just gone for the sarcasm instead of worrying about the thread being closed.


The Internet Chronicler lol .. yeah, this is a hoax.

I would think anyways that our imminent mass extinction would be more pressing than say .. spying on emails .. maybe not ..?


Well it's suppose to be sept. 2013...Not that I believe it but that's the supposed date of the global cataclysm..

posted on Jul, 28 2013 @ 03:30 AM
link
Does anyone know where I can find a replacement lightbulb for my BS detector? mine blew up when I read this, and they are hard to find since the dec 21 non event.

posted on Jul, 28 2013 @ 03:34 AM
link
Okay - check out Project Stargate on Wikipedia. I've known for a while that the C.I.A. was definitely successful with this project, it would explain how the U.S. is able to predict the solar flares - also check the picture to the left, where it mentions "Project Stargate" this would be relevant.

I'm not worried. I'm actually quite thrilled about this. The world we live in today is nothing more than a prison﻿ planet. I will not miss this place and am sick of living in such a #ty reality.

Snowden did only one interview. And about a week ago his spokesman said that he wouldn't make any new revelation.

Pretty slow solar flares then, if it takes them 7 weeks to get here....

Originally posted by The Arbiter of Lies
So Snowden has said that while working for the NSA he found that thier are solar flares headed for earth that will impact around mid-september killing hundreds of millions and destroying our technological world. So lets wait and see i dont belive it will happen like usual but im ready just in case are you? link below:

Total and utter honk. Solar flares are not that predictable.

Pretty slow solar flares then, if it takes them 7 weeks to get here....

Maybe they're stopping off for a burger and movie along the way.