What Type Of Gov Do We Really Have And What Does It Mean?

posted on Jul, 24 2013 @ 12:41 AM
link
Very, very few on the most informed, educated, and research oriented site on earth (ATS) will describe the US government as a true democracy. And that’s actually OK, because they system, as many of us are aware, is draped into a cloak with “Republic” stamped on the label. However, the republic is consistently usurped by broad and unbridled assumed authority by such instances as Executive orders, hiding behind executive privilege, innumerable secret organizations empowered with enough authority to create their own rules and apply them with impunity as if they are immutable constitutional law, While on the subject, the Constitution which is supposed to be the Founding Fathers divinely inspired instrument to create an equality of rights, liberties, and justice for all has itself been selectively shredded on the whims of exceptionally low status government employees and unelected staffers who view themselves as untouchable and most often are.

Certainly we do not live in anarchy. Someone is driving the train, but there is every indication that elected officials and the chain of command may be nothing but a very thin smoke screen that the more time passes the less the need to hide this reality. Who is actually in control is a widely disputed debate.

Monarchy? Don’t laugh. There are families, billionaires, institutions, and corporations that could have taken the reins behind the public view knowing this is the only way they could actually assert such a position of authority. However, there would be a VERY thin line between this situation and what a dictatorship would look like. If I was in a position to virtually rule the world from the safety of not only immunity but also anonymity I would think I would be living the best of all worlds.

What we do know vs. what we don’t know vs. what we think added to strong indicators in specific but borderline illegal, unethical, and immoral behaviors and actions leave us in the dark as to what is really going on.

As far as we know, the Germans never lost the war and the last 70 years have been a steady and gentle movement to that form of dictatorship with acceptance and approval of the masses when it begins to look like the better option. This is not to be assumed as my personal opinion (it is not), but simply an example of how many and how ridiculous a theory or theories may seem at first glance, the erosion of rights and equality brings all paranoia and asinine viewpoint at least possible. The lines between what is possible and what is probably is becoming far too difficult to discern any difference.

Lastly, there is current government’s overt panic over being found to have lied and approved violations of privacy and undue process. imprisoning innocent and not so innocent individuals for nothing more than complete supposition without access to legal representation for unlimited amounts of time without even having to file charges has shone a million watt spot light on the lack of transparency we are supposed to be entitled to.

It appears there are most certainly warring factions of our government vying for control they don’t have, and when they perform acts up to and including violations of right to eliminating problem children they are unapproachable because each covert operation or organization has taken great effort to appropriate damaging details against everyone else that no one dare point the first finger.

So the question I propose is simply as stated. What type of government do we actually have? Maybe if we could figure this part that knowledge can help good people develop means to retake our rights as Americans.

If not, but I am living in a dictatorship, I could accept it better if I was told the truth so I could know what the reality is and decide if I need to pack up and move to Australia.

Any input would be appreciated. Do you know what type of government we live under?

Fascist: a bundle of rods containing an ax with the blade projecting, borne before Roman magistrates as an emblem of official power.

It's unfortunate too,
as official power is supposed to be with "We The People",
and I can think of nothing more UNAmerican than secret courts and Judges.

Like the ones presiding over the NSA's prism operations. 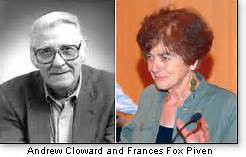 The Cloward–Piven strategy is a political
strategy outlined in 1966 by American
sociologists and political activists Richard
Cloward (1926–2001) and Frances Fox Piven (b.
1932) that called for overloading the U.S. public
welfare system in order to precipitate a crisis
that would lead to a replacement of the welfare
system with a national system of "a guaranteed
annual income and thus an end to poverty".

Cloward and Piven were a married couple who were
both professors at the Columbia University School
of Social Work. The strategy was formulated in a
May 1966 article in liberal magazine The Nation
titled "The Weight of the Poor: A Strategy to End
Poverty".

wikipedia / Cloward Piven
en.wikipedia.org...
edit on 24-7-2013 by mikegrouchy because: (no reason given)


It doesn't matter which category a governing body falls under. The one thing that every government has in common is that they are run by ambitious, self-interested people. From lowly department heads to elected officials, they all seek to subvert the laws in favor of their own personal interests. It's human nature.


All I know is, who ever is driving this train ? Doesn't give a damn about any U.S. soldier that died
fighting for this country. Because they're all rolling over in their graves right now. we are to the point
now where every death was in vain. This is not what any of them fought and died for. And that really
psses me off.

Like the ones presiding over the NSA's prism operations.


And also directing secret wars and meddling in governments affairs around the world. Arming the worst criminals and placing them in charge of whole populations supported by endless money and military might.

posted on Jul, 24 2013 @ 01:32 AM
link
as it stands..our government does what it wants.
the constitution is just a "goddamn piece of paper".
we are on a runaway train and the MSM has their backs.
nothing will stop this but the big crash that is coming up.

posted on Jul, 24 2013 @ 02:40 AM
link
We have a government which serves Him who sits on the throne.
He who warned all of us that our own iniquities get poured back straight upon our heads. Let me give a few modern day examples.

1.Laws are for the disobedient.
How does a government get the people to give them the power to start passing law after law? By teaching the populace to act disobediently. When society is orderly and produces the fruit of the Holy Spirit - patience, kindness, long suffering, peace, love etc - there are not many laws needed in an attempt to regulate behaviour.

2. Increase of police and the militarisation of police.
An orderly society largely in Christ produces the fruit of the Holy Spirit. A city needs but a handful of police. But as people are swayed to reject true faith and instead drink from the media pulpit, behaviour is changed. The behaviour produced from the desires of the flesh escalate...as does the consequence. Get enough hooked on the drugs which are allowed to swamp our streets and be glorified in the media pulpit and soon the government is pleaded with to increase its police to deal with the thefts, murders and what not in an attempt to "deal with" the consequences. Teach children disrespect of authority and we get gangs of kids roaming the street smashing things, terrorising the innocent, flipping of the police etc. the citizens then demand more laws and police. Glamourise violence and guns and make them easily accessible, then the resulting murders and mayhem drive the citizens to demand, and allow, the government to militarise police. This then produces a hardened police and hardened lawkeepers into power.

There is an end. It's called tyranny because the people demanded peace and security through laws. We gave them the power. We, like those in Judea, nearly have a Sanhedrin. The world is going to get it because we don't know or understand that we were overcome.

Our own behaviours and rejection of the gospel, the power of God unto salvation, has produced this point in time. A population taught to rush headlong into fulfilling every desire and lust of the flesh has given us thousands and thousands of laws becoming more and more oppressive, regulating early every hour of the day. Likewise, the consequences of choosing that path have blinded us to the reality that it has encouraged liars and those who love power over men to creep into office. Who allows the media to preach daily an anti-Christ gospel of violence, hate, bloodlust, fantasy and eastern religion? The government knowing full well the outcome. Who allows drugs to swamp our land? The government knowing full well the outcome. This is why we have no leaders that ever address the cause of crime in this country, but instead are happy to keep passing more and more of what they want - laws. Who forces all children to attend school so that their minds are filled with the very 'knowledge' which 'proves' to them that there is no Creation? The government who understand the consequences.

At the end of the day, we were overcome exactly how the Bible says that we would be. We have the government which we demanded and now that the powerful mighty men are in - we get tyranny. The citizens do not understand that we were overcome by those whose statues, idols and occult phalluses decorate our big cities - Freemasons. Each and every time one of them preaches, they preach and appeal to the flesh. They aren't called Judaism for Gentiles for nothing. Like their fathers, their world is control over men and approval from men. They get none of that from a population in Christ. They get both from a population in Adam.

What is it called, OP? The beast. The world worships it. It rejects the order and peace of having God Almighty as its King and Lord and the things that stem from it - love, patience, choosing of life over death, kindness, mercy, truth tellers - and the resulting consequences, unlocked doors, no crime, neighbourliness, no envy, no greed, no murder. But instead we have chosen the opposite and still look to man as if he is capable of being our solution.

If not, but I am living in a dictatorship, I could accept it better if I was told the truth so I could know what the reality is and decide if I need to pack up and move to Australia. Any input would be appreciated. Do you know what type of government we live under?

Actually, I believe that the current form of "government" in the United States is modeled after the American Mafia families of the 1950's. It doesn't tolerate any dissent, if you don't go along with them, they put a "hit" out on you, with the "hit men" being the IRS, CIA, FBI, NSA and Homeland Security. They launder money through the crooked bankers and stock brokers, and they counterfeit money through the "Federal Reserve". They steal your wealth with the IRS, and they plan to bury the bodies in the FEMA camps, which now exist in every state in the union. Just my input, for what it's worth. Sleep well, big brother is watching.