This (Opportunity Sol 2171 link below) is clearly someone doing something on the ground and it is unlikely to be done by Martians just running around in circles, but is more likely to be done by a machine of some kind. I have done this kind of thing on the beach with my car and so that, to me, gives more weight to the argument that it may have been caused by a vehicle of some kind. There are also the parallel tracks which go off towards the top right.

Are we supposed to think these tracks are made by the Rover? I dont think they can go fast enough to create this kind of disturbace on the ground. Even if it is soft ground, it would probably not look as churned-up as this does if the Rover had done it.

Has there been any official explanation of this?

This image has shape and form to it and like the last one, is definitely not one caused by the Rover.

So all I can assume is that there are others on Mars apart from us.

I think there's....something! on mars.
People? Martians?
My guess is there be soldiers from earth up there, probably since the 60's.

Surely the rover doesn't have that sort of torque.


Was thinking rover stopped and did some digging...can it do that.

posted on Jul, 23 2013 @ 11:57 PM
link
I've given up on NASA. Here's the thing that bothers me: They always somehow contrive to land in the sparsest and LEAST interesting of all possible places--presumably so that they don't have to find anything that they can't explain. And then they invariably find all kinds of things they can't explain. Not that they don't explain them anyway--but in a way that really shouldn't satisfy even the least observant cabbage-head (all the "official story" buyers notwithstanding).

We'll never know until someone we can actually trust gets there....

There are plenty of natural formations on earth that look artificial simply because we are used to comparing them to artificial means, but that doesn't meant they are.

The sandworms did it.

posted on Jul, 24 2013 @ 12:48 AM
link
Wait!
In the first photo,
just in front of the big rock in the foreground,
i can clearly see the Ten Commandements - both tablets,
half buried side by side in the sand!

That's the evidence of religious society in the distant past of Mars.

Rocks.
More Rocks.
And Erosion (ancient water, wind, sun, etc: erosion comes in many forms).
There are plenty of natural formations on earth that look artificial simply because we are used to comparing them to artificial means, but that doesn't meant they are.
The sandworms did it.


And here we have some kind of intellectual reasoning to show us that there is a thinking person behind this post ?

Firstly, ANCIENT water is not likely to have left us with a structure like this. Wind, sun cannot cause the soil to be moved in this way on Mars. Maybe you actually give it a small amount of thought and tell us what, in your opinion, you think may have caused this soil disturbance?

Secondly, we are not talking about conditions on Earth since the wind, water and other earth erosion mechanisms have a far stronger effect here than on Mars.

So, now what can you contribute to the discussion ...."sandworms did it" ? I hope you did not go to university to learn this discussion skill, if so then you may have wasted your money.


I did find this interesting in your op image scaled before tracks. Probably MARS pareidolia. but 1 found it interesting... 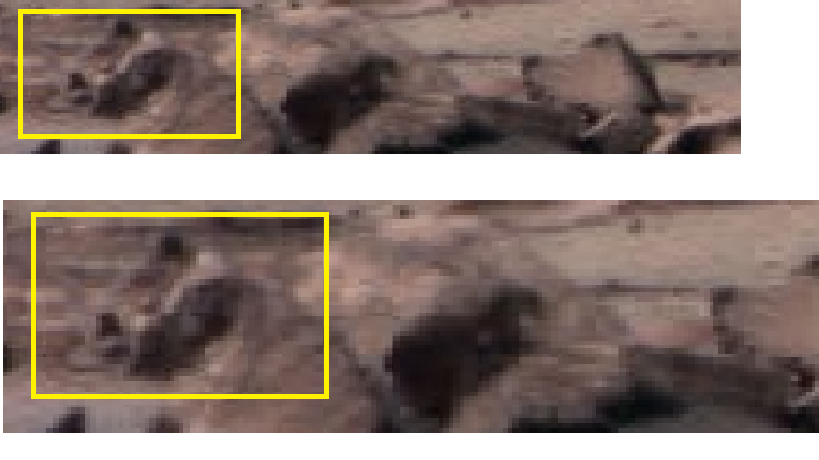 I did find this interesting in your op image scaled before tracks. Probably MARS pareidolia. but 1 found it interesting...

Yes, it does look as it there is something unusual there but there are so many things just on the edge of pixellation or compression limit. When I am doing this, I find it really annoying that I cannot quite see what is there because I feel I have to have in-your-face (well, my face, anyway) clear examples to show and those on the boundaries like this one is, makes it easy to argue that it is "just a rock". :-(

posted on Jul, 24 2013 @ 09:13 AM
link
So what am i looking at? Whenever I look at these Mars photos I can never see what the OP's are suggesting... Circling the location on the picture would be VERY helpful.

posted on Jul, 24 2013 @ 12:15 PM
link
i wish people would stop wasting our time with rocks and wind dunes. there is nothing there until man gets there and pollutes it like we did the earth. what more can anyone say?

Can you explain where the "tracks" are?

Opportunity is continuing the circumnavigation of "Concepción" crater. During this period Opportunity traversed around a ray of ejecta that is comprised of rock debris from the impact that formed the crater.

In Mars Reconnaissance Orbiter images these rocks and their shadows appear as dark streaks extending to the south and southwest from Concepción crater. Data collected on Sols 2165 (Feb. 25, 2010) and 2166 (Feb. 26, 2010), indicated potential targets for direct measurements with the Instrument Deployment Device (IDD). A 22-meter (72-foot) drive along the ejecta ray was performed on Sol 2167 (Feb. 27, 2010). However, because of the assessed mobility risks associated with this part of the jumbled rock field, no in-situ targets were approached. Instead the rover continued the circumnavigation campaign with an 18-meter (59-foot) drive around the ejecta ray on Sol 2171 (March 3, 2010).

I guess 'circumnavigation' is the operative term for that period.

Question:
So, are you all saying these are natural rock and soil formations? (just a yes or no answer will do)

All I see above is many people giving details which have no bearing on the question I asked above and one which is critically important for us all.

Mars is not perfectly flat. Some areas will have thicker and softer soil. Some will have rises in them, and if a rover's wheels sink into them at an angle or scrapes the side of them, it will leave deep, and what looks like raised up tracks: 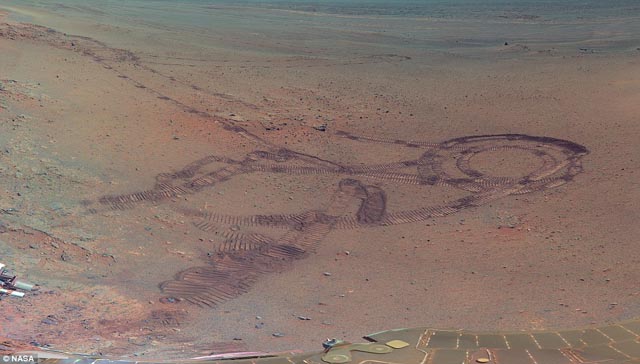 You can see it again here: 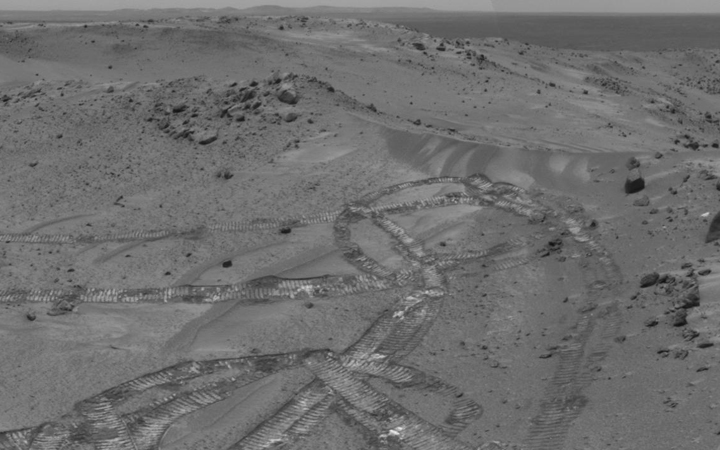 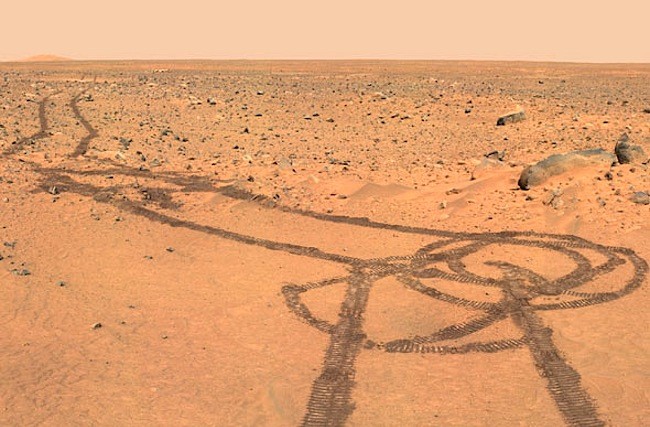 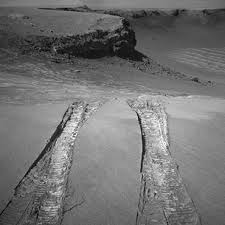 You do not have to take our word for it. You can experiment and test it for yourself. All you need a a remote control car with big wheels, bags of flour (as that is the consistency of the martian soil), and toss in a few rocks if you want.

Fill some area of your yard with the flour. Make it deep in some places, and more shallow in others. Drive the remote control car around the flour, using the lowest speed and look at the results.

I'm sure you'll be surprised to see what happens.
edit on 24-7-2013 by eriktheawful because: (no reason given)

Originally posted by qmantoo
So, are you telling me that the rover made these tracks? Yes or no please.

And before you jump up and say: "No one is going to make me believe it!" I offered you a way that does not require anyone here "making" you believe it.

You can test it yourself, using inexpensive things, right here on Earth. Using the Scientific Method.

So nobody has to convince you of anything.

Image #2- how the hell did that happen?

I can't find any leading tracks. Even if it traversed rocks there should be something like tracks in the vicinity no?


I know this seem farfetched but... 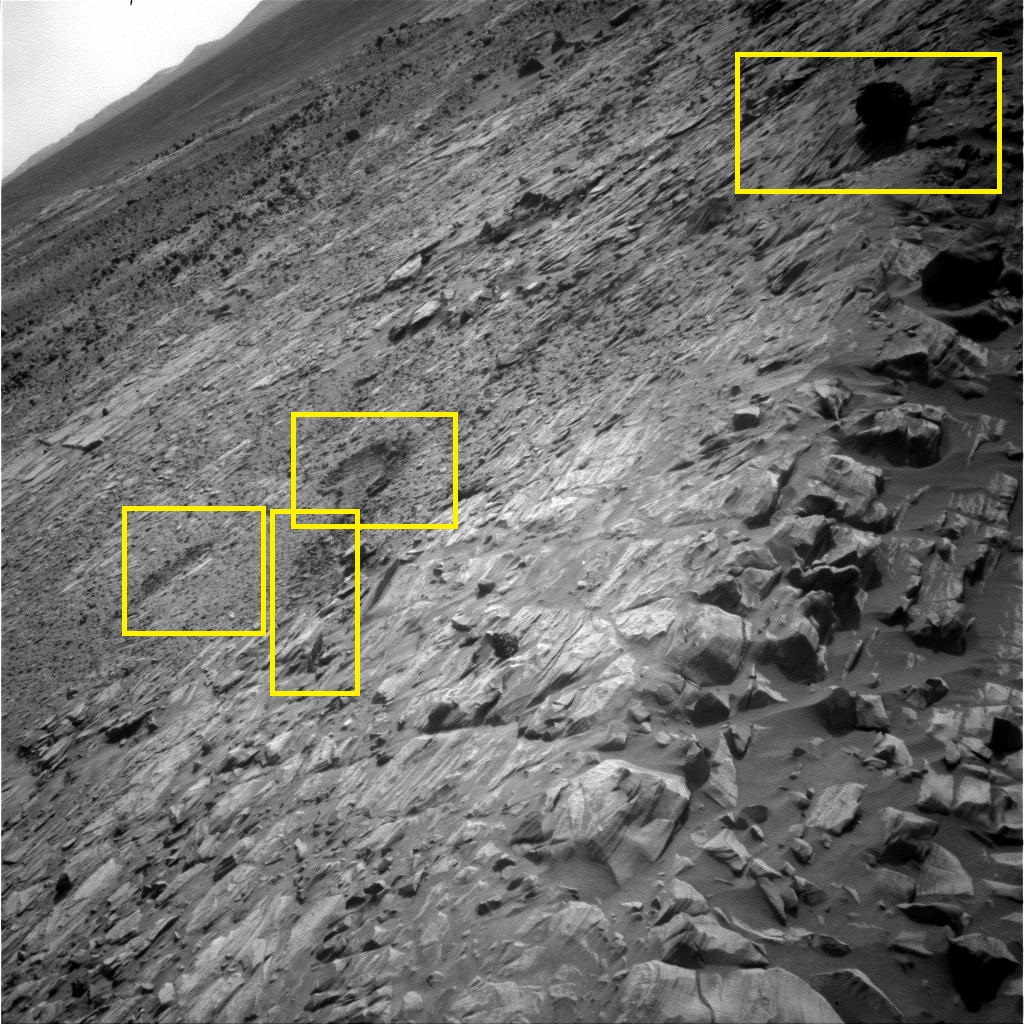 this object or MARS rock 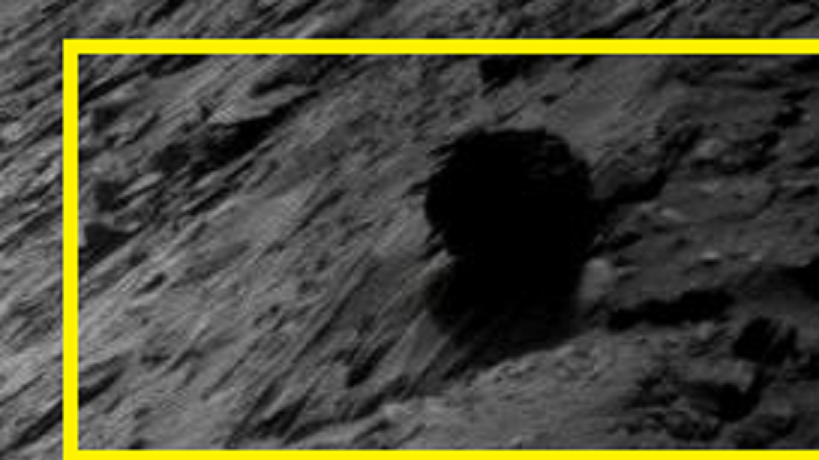 looks like it could of somehow made that mark print?