Recently published in the Journal of Hematology & Thromboembolic Diseases, the study underscores the potential ‘leukemogenic’ properties of the Bt toxin biopesticides used in almost all GMO foods

Just a few months ago, references to GMO were made by scientists in France who conducted a study that pinpointed Monsanto’s genetically engineered corn, called NK603, as a major cancer-causing agent. Rats developed cancerous tumors the size of ping-pong balls. The study was called into question; however by academics under Monsanto’s reign.

For the whole article and study
naturalsociety.com...
www.seattleorganicrestaurants.com...

More and more is coming to light that these gmo's are no good.
I'm sure in the future more evidence from independant studies will show just how bad they really are and what they are doing to our health.
Which Monsanto will obviously deny then.

They are playing a smart and dirty game and should go to prison for crimes against humanity.
Stop buying their products and stop supporting their bussiness before they infests every market and your own garden.
edit on 22-7-2013 by intergalactic fire because: (no reason given)


What's hell is the FDA keeps giving them a free pass.:shk:
Seems like our country is the only one that is NOT looking out for the best interests of it's citizens.

Originally posted by snarky412
reply to post by intergalactic fire

Grow your own non GMO


This doesn't surprised me at all, GMOs are on everything, I was just having a conversation with my friends that it seems that this days we all know somebody with some type of cancer when 20 years ago it was just a rare thing.

Since our group of friends got together we already have various friends that have been diagnosed with cancer is like an epidemic going on.

Also, if you read the side effects of many drugs that have to do with suppressing the immune system they all come with warnings on possible lymphoma and leukemia, so we are actually bombarded everyday with toxins willingly and unwillingly that will render us susceptible to cancer.

And you don't see the government acknowledgement of any of this.


What happen with the FDA is something that started back in the early 90s before that the purpose of the FDA was to keep us safe and they did a very good job, but then government budget cuts cripple the agency and guess who tool over, the same groups in the corporate world that are poisoning us so they could pass their drugs and Frankenfoods with minimum oversight they are now A CORPORATE WHORE AGENCY OF GOVERNMENT .


Originally posted by snarky412
reply to post by intergalactic fire

Agreed,.
FDA approves financial gain,.
that is all
ever notice they dont approve vitamins?

The Sinister Corporate Agenda of the FDA

You know that the study did not use GMO plants, right? You know that Bt toxins are used as pesticides in organic farming, right?

Anyway, about the claims:


Interesting though, the study was submitted to Food Chem Toxical (a well established journal) and withdrawn last year.
www.ncbi.nlm.nih.gov...
Since the Journal of Hematology & Thromboembolic Diseases is a brand new journal, maybe that has something to do with it.


Yet another poorly designed experiment which does not show that Bt toxin (much less GMOs) are harmful.


Just like so many other anti-GMO papers pushed by anti-GMO groups, the sample size is far too small. You cannot achieve a statistically significant set of results using only three mice of each sex for each group, especially considering the historical incidences of these blood disorders in the Swiss Albino Mice is not reported.


If the Bt delta endotoxin expressing bacteria did cause various blood disorders, then you would expect to see a relationship between the dose and the response, however we don’t see this in the paper. For example it reports a “U-shaped” dose response curve with high responses at both low and high levels of Cry1Ac after 24 hours. That the mice fed the low levels of Cry1Ab had the highest response, while all levels of Cry1Aa had the same response over a 24 hour period.


Bt spores are widely used in agriculture. But they are not genetically modified to produce toxins. The recombinant proteins are produced by GM plants. Therefore, there is no reason to assay GM Bt spores as alias to GM plants.

The language used in the paper is not clear. The authors claimed to have used spore-crystals. This is not the same as having used purified Cry proteins: to the best of our knowledge, the spore-crystals mentioned here are indeed lyophilized spores for Cry-producing Bt strains, as described in the first paragraph of the Methodology section.


Surprisingly, the authors do not have a fundamental control: a spore not expressing a toxin or expressing an unrelated toxin. The only controls were water (negative) and cyclophosphamide (positive). The lack of this third control prevents any conclusion on the true effect of the toxins on the animals, since all other spore molecular components could also affect the mice in such unusual high concentration as those directly applied to the digestive system in these ill-designed assays.


On the withdrawn of the article it says:


I wonder which one, the author or the editor?


with connections to Monsanto, i know who to put my money on.

Richard Goodman, associate editor for biotechnology for the FCT journal


Richard E. Goodman is professor at the Food Allergy Research and Resource Program, University of Nebraska. But he is also a former Monsanto employee, who worked for the company between 1997 and 2004.

Although he had no documented connection to the journal until february 2013, his recruitment raises some questions about his former connections.


Goodman had no documented connection to the journal until February 2013. His fast-tracked appointment, directly onto the upper editorial board raises urgent questions. Does Monsanto now effectively decide which papers on biotechnology are published in FCT? And is this part of an attempt by Monsanto and the life science industry to seize control of science?


And i wouldn't be surprised what connections and interests other editors of the FCT have.


Is it a coincidence that the campaign to discredit the Séralini study happened at the same time as the withdrawn of the study from the OP?

edit: I'm not sure about the actual date of the publishment and withdraw of the paper. Your link states the date of nov 2012.
The Journal of Hematology & Thromboembolic Diseases states the date of publishment on March 16, 2013. That would be after Goodman was assigned as editor of FCT
edit on 23-7-2013 by intergalactic fire because: (no reason given)


Don't forget the EFSA, the FDA in Europe.
It's a big bed and the sheets are even bigger.

Originally posted by thishereguy
so does this mean i can sue monsanto for my luekemia?

I'd say probably not even if it were proven beyond a reasonable doubt. Wasn't there a sneaky law passed not so long ago making it impossible to sue Monsanto ?


perhaps you can show us some peer reviewed studies done by monsanto? oh that's right they don't publish their findings since the FDA just naturally takes their word for it that GMO's are safe.


Monspanto is a multibillion dollar monster that is poisoning all of us, it doesn't take any research to show the side effects of frankenfoods, and neither the big pharma, they are killing us and our generations to come.

America is nothing but a nation of unhealthy people due to the poison that is feed to us.


i couldn't agree more Marge and when i see senior members endorsing them, i have to slow the spread of wanting to vomit in my mouth. Phage is quick to defend them when he knows very well how this "system" works and none of it is working for the people's of this world, just the few wealthy.

monsanto has never had to provide documented studies of GMO's to the FDA, monsanto just has to say, yes they're safe. now what part of that arrangement seems scientific or moral?

i wont even get into criminal suit protection afforded to them by the govt.

i must therefore assume that certain members are nothing but shills for the industry and govt. but i'm not naming any names.
edit on 23-7-2013 by LittleBlackEagle because: (no reason given)


Don't know about any law but wouldn't be surprised.
I guess it depends on how much support you will get and ideed what further studies will proof.
Even than yes it would be difficult to stand up against ''The Holy Mountain''

Wonder why he chose the name of his family in law to be used as the name of the company.
The whole history of ''Holy Mountain'' is just a sick dirty bussiness. 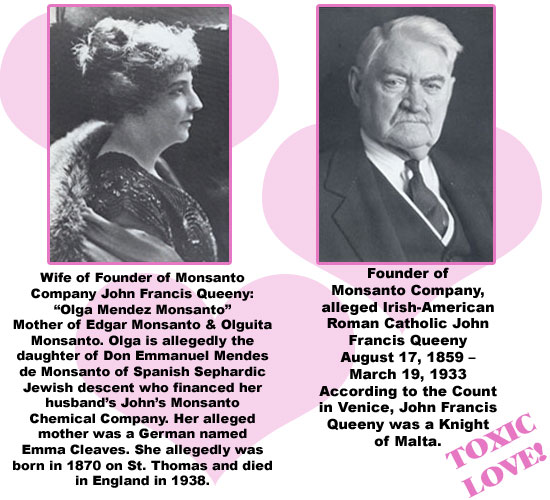 It's funny how a bussiness who used to produce PCBs, DDT, dioxins, chemical weapons, their involvement in the creation of a nuclear bomb,... suddenly has interests in the health of the human population and want to solve the hunger in the world.

ooow, if you wonder what the secret ingredient is of coca-cola, don't look any further.


edit, indeed there is a law now we know
edit on 23-7-2013 by intergalactic fire because: (no reason given)


Actually they have gotten the rights from the government and by law (that they have pay for very well) to no having any of their seeds or products been tested by any independent lab in the nation without consent, that is why any testing and results are bashed and trashed if is done by sources that are not under Monspanto control.

This is how the corporate dictatorship works in America.