Today's lot is a 103 acre partially wooded tract set in scenic New Hampshire and formerly belonging to some major tax evaders, according to Uncle Sammy. See? It's a beautiful property. 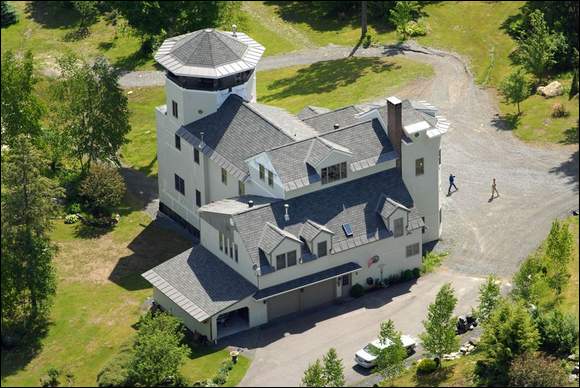 There is just one teeny tiny little problem. You might get blown up while walking your new property!

CONORD, N.H. (AP) — Federal officials preparing to sell the New Hampshire compound of a tax-evading couple convicted of amassing an arsenal of weapons can't guarantee that explosives and other booby traps aren't hidden on the 103-acre spread.

In fact, they will openly warn bidders that land mines might be planted throughout Ed and Elaine Brown's bucolic property in the small town of Plainfield. And they say prospective buyers won't be allowed on the grounds until they submit a winning bid that frees the government of liability for dismemberment or death.


Serious fail on this, I say. First they take it the way they did which is in the past now, but go on to unload it without knowing if it's still a hot area for live explosives? I'm curious...does the property come with felony ATF charges if you find some and call to turn it in? Possession after all....?


Mikelson said she has contacted numerous federal agencies that have explosive detection equipment and dogs, and none could ensure a clean sweep of the property, which is set back from the road and includes acres of storm-damaged trees and other natural debris.

"With the size of the property, there's no way to search it and have any guarantees," Mikelson said.


Well, that's just not acceptable on any level to my thinking. If 103 acres of purely civilian acreage that may have had ONE occupant get stupid with unmapped IED's? What the hell do these bozos mean by telling us they've ever cleared former bases and ranges dating back to World War II and beyond, littered with crap no one ever had maps for? Many of these areas do and have FAR exceeded 100+ acres.

and finally, just to put a laugh to the joke here....


By federal court order, the properties must be sold as is. Minimum bid for the Plainfield compound is $250,000, while the Lebanon office must sell for at least $507,500.

So who wants to place odds on a insurance carrier for the property? Basic liability? Homeowners? Act of GOD insurance? Under those conditions, I don't think they'd insure a go cart kept in the garage of the main house. What is Uncle thinking to pawn off what they have to work long and hard just to come up with a release of liability statement to sell??

* Seriously. If they believe what they're saying here....and they apparently do, to work as hard as the article notes in that liability release? Then perhaps letting these old folks out early in exchange for just TELLING THEM where any additional devices may be would be a fair trade? After all...they didn't shoot the pope or even rob a bank. They screwed the Tax Man. Let them die broke and sorry they ever heard of the IRS, like everyone else. Prison seems overkill when the result brings things like this??

Anyone want that fine property while the bidding is gearing to open, by the way? I'm sure it'll be in real high demand!

posted on Jul, 20 2013 @ 11:34 AM
link
Sounds a fun job if you like playing with diggers and doing some serious redesigning of the grounds...but it would certainly be jehova's witness proof as i don't think even they'll take the risk

Yeah, that would be one sure fire way to eliminate door to door soliciting.


Warning: Active Explosives and Man Traps Present - Enter At Own Risk -
Use of Deadly Force Will Be Entirely Accidental. Apologies in Advance!


I don't think you could even pay delivery people to cross your driveway line. lol....


Somehow, I don't think it'll work that way, do you? I'll bet the terms and conditions will be unbelievably narrow for time, process and specific phone numbers to call in sequence if they find so much as a mercury dime sitting somewhere the feds missed, let alone live ordinance or weapons. Indeed, there could be anything buried out there, given past history of the property and the obviously uncooperative nature of the previous owners.

It strikes me as a particularly nasty way to pawn off a potential nightmare and make it someone else's problem ....when they created the problem to exist, from start to finish by how I recall the story unfolding.

posted on Jul, 20 2013 @ 12:51 PM
link
crafty person would rent out the property to contractors to train bomb sniffing dogs on the property,or teach classes on mine removal....they were kind of vague with what kind of explosives and what not and that alone is extra terrifying as at least if you know what your looking for you have a better chance of finding it . and those that put bombs on their land tend to put other items like dead falls and other shady suprises

would be a very very interesting to read the home inspectors report after some one buys it......

the place is perfect for going off the grid.
it would be simplicity itself for me to create a Servitor to locate all the booby traps, which I'd leave in place.
then add my own, some drones and a small army of Spirit Sentries and absolutely nobody, would be taking my property away for tax evasion *COUGHING* I mean no criminal scum would be invading my property .