posted on Jul, 19 2013 @ 06:04 PM
link
In 1787, social theorist Jeremy Bentham produced a design for an imposing, circular prison that would allow a few guards to observe all of the prisoners without the prisoners being able to tell whether or not they were being watched. He labelled it the “Panopticon” from the Greek “panoptes” meaning “all seeing”.

The idea of the prison was to impose upon the prisoners that the idea that at any given time, they could be being watched by the guards. There simply wasn't enough manpower to watch everybody all at the same time, but the Panopticon ensured the prisoners would behave as though they were being watched all the time, thus 'guarding themselves'.

In the last few decades, CCTV cameras have appeared all over America and western society. Yet across many work places and street corners, many of these cameras are not functional, they are there merely to act as a deterrent and ensure people conform. It is a play on the Panopticon theory, that people will still behave as though they are being watched because there is the chance that they could be.

It does not stop with CCTV. With the creation of the internet and more advanced forms of communication, the controllers of society have taken the Panopticon theory to new levels. Slowly, but surely, they have implanted into the collective consciousness that we are being watched and monitored at all times. Hollywood, as usual, has played a significant role. Here is a short, but perfect example from the 1998 blockbuster 'Enemy of the State' (such a fitting title :up-

Remember that was 1998- pretty much revealing everything the NSA has been doing (there's also some 9/11 predictive programming for those paying attention...). It's just one example of many. The social engineering required to maintain control of a 'democratic' society is incredible, we are fed ideas for years before they become reality so we can collectively accept them.

Fast forward to today, and we have Edward Snowden, the supposed CIA whistleblower who has leaked to the world that the NSA is spying on everyone. This has acted as confirmation of the ideas most people knew about anyway. Because it has already been implanted into our collective mind, people haven't really reacted that negatively to the recent 'revelations'.

All Snowden has done along with the massive amount of media attention (which the elite control and people should be suspicous of the mass media coverage) has confirmed to the people that they now live in a Panopticon surveillance society. We now 'self regulate' and 'self police'. The NSA could collect all the data in the world on everybody, but there are billions of people. Hundreds of millions in America alone. The panopticon society, aided by Snowden's NSA 'leaks' has created amongst the mind's of the people that they are being watched, nothing more. People for the most part, have merely accepted this reality as the elite planned. 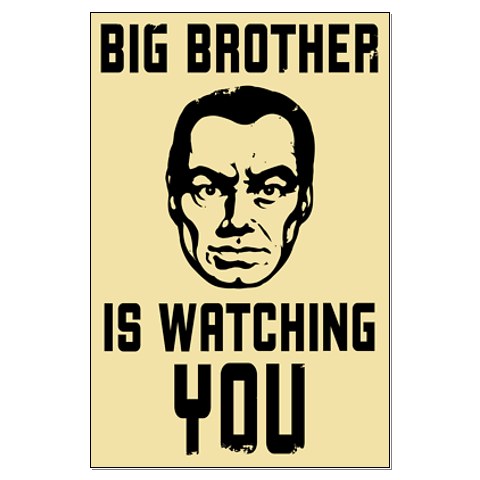 You may think so what? You are not bothered that you could be being watched. But this march to a NWO is not going awat any time soon. The NDAA wasn't created for fun, it's all linked. When people start being taken to detainment camps, when researching the truth warrants you a potential 'enemy of the state', then people will think twice knowing that what they are saying on the internet could be being monitored. They can't act against the millions upon millions, but those millions upon millions will modify their own behavious based on the Panopticon society they live in.

posted on Jul, 19 2013 @ 06:51 PM
link
Although I was tagged and bagged long ago, regardless of whether I'm being watched or if somebody doesn't like what I may have to say, I refuse to modify my statements of opinion out of fear of being watched. To me, the purpose of the First Amendment is to assure the freedom of those who would be critical of government for it would be the government that would most likely abuse its power to curtail critics of it. It's all about assuring adequate discourse and allowing for Devil's advocacy so that, as citizens, we can make the best possible decisions for our country and expose wrongdoing when it occurs. So count me in on speaking freely and hell, I'm even doing it on Facebook. Suck it, Zuckerberg and the NSA.

I also agree that the entertainment media has really been suggesting this kind of Panopticon for a long while. Heck, look at Person of Interest. I can never quite tell, when they introduce these kind of concepts into entertainment, whether it's because it's an idea that is already out there in the public discourse and they are simply tapping into it from a creative point of view or if the purpose is to inure the populace to an idea that may otherwise be distasteful. It's a tough call but one of the things that I look for is how the idea is spun. Is it spun so that its being depicted in a good way...or bad? Person of Interest, to date, almost implies that its for the public good still as it can "save lives". Not that long ago, the makers of that show were on Reddit answering some questions. They mostly kept it light/neutral but made a few interesting comments here and there: www.reddit.com...

posted on Jul, 19 2013 @ 08:09 PM
link
You are one of the few people who actually "get it." I am so sick and tired of hearing people use the argument you mention, that their lives aren't being affected, therefore they don't care whether they are being watched or not. Or an idea that I REALLY hate, if you have nothing to hide, you wouldn't care. It just makes me realize how stupid certain Americans are. I mean for someone to not understand the very tenets this country was founded on is ridiculous, and is much more than a failure of our educational system.

And I probably would have scoffed at the idea that the MSM is controlled by the government or by corporations if one had asked me some years ago...But now there is AMPLE evidence to suggest that this is actually the case. And not only does the media serve to ensure that Americans, on average, do not get the important news they really need to know, the MSM also serves to promote divisions in society, and also promotes an ideology for each of these divisions, which is part of someone's overall master plan.

I have never believed in the Illuminati, or some society of individuals that controls the entire world, but first of all one must admit that groups like the Bilderbergs and the gatherings at Bohemian Grove are suspicious, considering the caliber of people that are meeting together, who have no business meeting together if you think about it, unless of course they were doing something that will affect the lives of millions or billions. And then there is the fact that we have career politicians in all democracies. These people, despite what they say, are not on the side of the people for the most part. Very few are.

And they work together with corporations and other lobbyists to trade one another for benefits, things that they have no business trading. For instance, they make backdoor deals to give government monies to these entities, often through shady means. There are still many more instances of corruption in our society. And the fact of the matter is that you are correct OP...it doesn't matter if we are being watched or not, because most Americans think we are, and they just accept it. But we really are. Obama came out and said nobody is reading your emails, etc., but the truth is that all that information is being stored, and very well could be read by anyone who worked in the storage facility.

Sure, a court order is SUPPOSED to be necessary, but notice how the court has NEVER denied a request for information collected by illegal means. There is always a downside. And the most important thing one must realize is that things are going to get worse.

posted on Jul, 19 2013 @ 08:47 PM
link
I always thought those leaks were part of a larger plan. NSA would know how to hire people who wouldn't leak documents or at least stop the leaks before they were made public.