The wierdest crater I have ever seen and a floodlighted building roof. 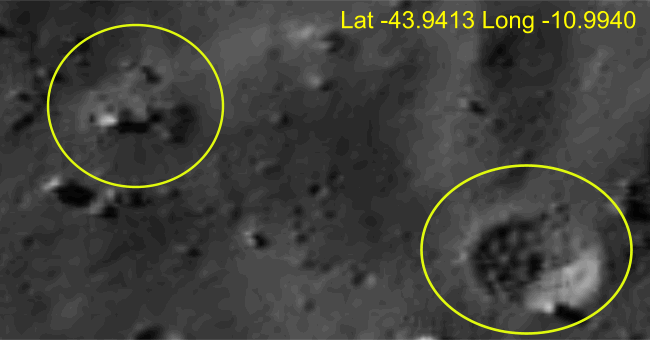 This image is of the weirdest crater I have ever seen. It looks as if it has bushes growing in it ! These 'bushes' appear to be joined up by cables and the lighter rectangular area to the right suggests of a concrete area. Can you suggest anything else they could be?

The other yellow circle to the left is something I am really not sure what it is - except that it is unusual, consists of square-shaped 'modules' (like humans would construct!) and is too large to be image artifacts. It also looks as if it has a light shining onto the top surface in a typical fan-shaped conical pattern.

You really need to go to LROC QuickMap and look at these areas for yourselves.


You really should have a look at this.

posted on Jul, 19 2013 @ 01:11 AM
link
First of all, look at the artifacts that are created in the picture, that are not really there on the surface. Look kind of in the middle, towards the bottom of the picture, slightly to the left. It is most obvious here, and once you see it, you can see how it permeates the entire picture. See those wavy sort of artificial lines? THAT is having an effect on what we see in the first place.

And second, when one attempts to zoom too far into a picture, depending on how and with what the picture was taken, things will become distorted. You say the zoom is not enough to cause distortion, yet I say look at the wavy lines I described above.

Moving on, anyone who analyzes pictures of the moon should realize one fact...The angle of the picture will affect how things look. A shot from directly above obviously will not present an accurate picture of the landscape. And another fact is that it is often difficult to tell what is a crater, and what is a mound or hill of lunar soil. What may appear to be sloping down into the ground, can actually be a hill. And if we cannot even tell that much regarding the lunar landscape, how can one claim that we are getting an accurate enough picture to discern between artificial and alien structures? It would be simple if the alien structures actually looked anything like structures, but what you are pointing out is nothing more than natural features.

And then there is the fact that albedo, the light reflected by different surfaces, affects what we see. The areas that seem darker and lighter than others is NOT indicative of an artificial surface or structure. The fact that surface dust, and soil upturned from a deeper layer, are going to have different coloration or shades, and albedo, is common sense. The area that you suggest as being "concrete" is obviously due to some natural phenomenon.
I just finished commenting on another thread regarding basically this same issue of distortion of the lunar landscape in photographs, so I don't really feel like rehashing all of that information. So it will suffice to say that there is this widely held belief that is absolutely wrong, that one can simply look at geological features on an alien world and easily distinguish between that geology and ET life. First of all, most people have no knowledge of either.

How can someone who is not absolutely familiar with geology, or lunar geology for that matter, state what is or is not natural? And then how can they go a step further to claim that not only is something not geologically naturally, but is actually extraterrestrial, when they don't even know what an ET presence would look like? Often people point out things on the moon or mars and claim it is proof of alien life, when in fact to the trained eye they are seeing nothing more than natural features. And often times these supposed structures and artifacts appear completely unorthodox in that they are not indicative of how we would lay out a complex, or build a structure, etc. What I mean is that when something appears all misshapen, and is a different color, one should not assume it is alien.

posted on Jul, 19 2013 @ 01:36 AM
link
Jiggy Potamus -
A lot of what you have said is both correct and obvious and does not mean these structures are natural as you claim.

there is this widely held belief that is absolutely wrong, that one can simply look at geological features on an alien world and easily distinguish between that geology and ET life. First of all, most people have no knowledge of either.

In fact, unless anyone has been there, neither have we any knowledge of what is alien and what is a geological feature. Anything could be either, however, since science has named and identified many craters on the Moon, I think that there should be an explanation for this - other than "artifacts".

All I said was that this crater did not look like a 'normal' crater - you know, one which we have come to recognise as a crater on the Moon from looking at photographs. Then I asked what you and others thought it was.

So far, you have not speculated on why this 'crater' on the ground is unlike the others. Care to do that? From the previous post, I do not think you can be drawn into making an interpretation.

My image posted on here is not a very good one, so if you are referring to the artifacts in that, then please look at the original in quickmap instead. If you see artifacts which could explain the look of the crater (for example) then maybe you explain to us how they appear only within the crater boundary.

The image I posted was from a screenshot from LROC QuickMap at the coordinates given. I reckon 1m per picel is pretty clear and so perhaps it would prove your point if you posted another image of the same crater without these "artifacts" to show us what it should look like. Go on, I challenge you.