You know the more you read about Tesla the more you see the guy was the father of the 20th century practically.
The guy was seriously ahead of his time. And mostly just laughed at and ignored.
Very much a shame. But at least we enjoy the fruits of his labors.

I can't imagine a guy thinking about and actually creating a remote control boat during that period in time.

Nikola Tesla's influence on the modern world as an inventor, scientist, and engineer is too often overlooked. Tesla harnessed the power of alternating current, developed induction motors, and even experimented with wireless power, yet there is still no museum dedicated to his extensive work in the United States.

Though many of Tesla's ideas and inventions were influential and had a near-immediate effect on the world around him, many more were met with indifference, laughed out of the room, derided in press coverage, or simply ignored. Still, their influence in machines and technology today are tangible, even if they began as self-styled magical toys. 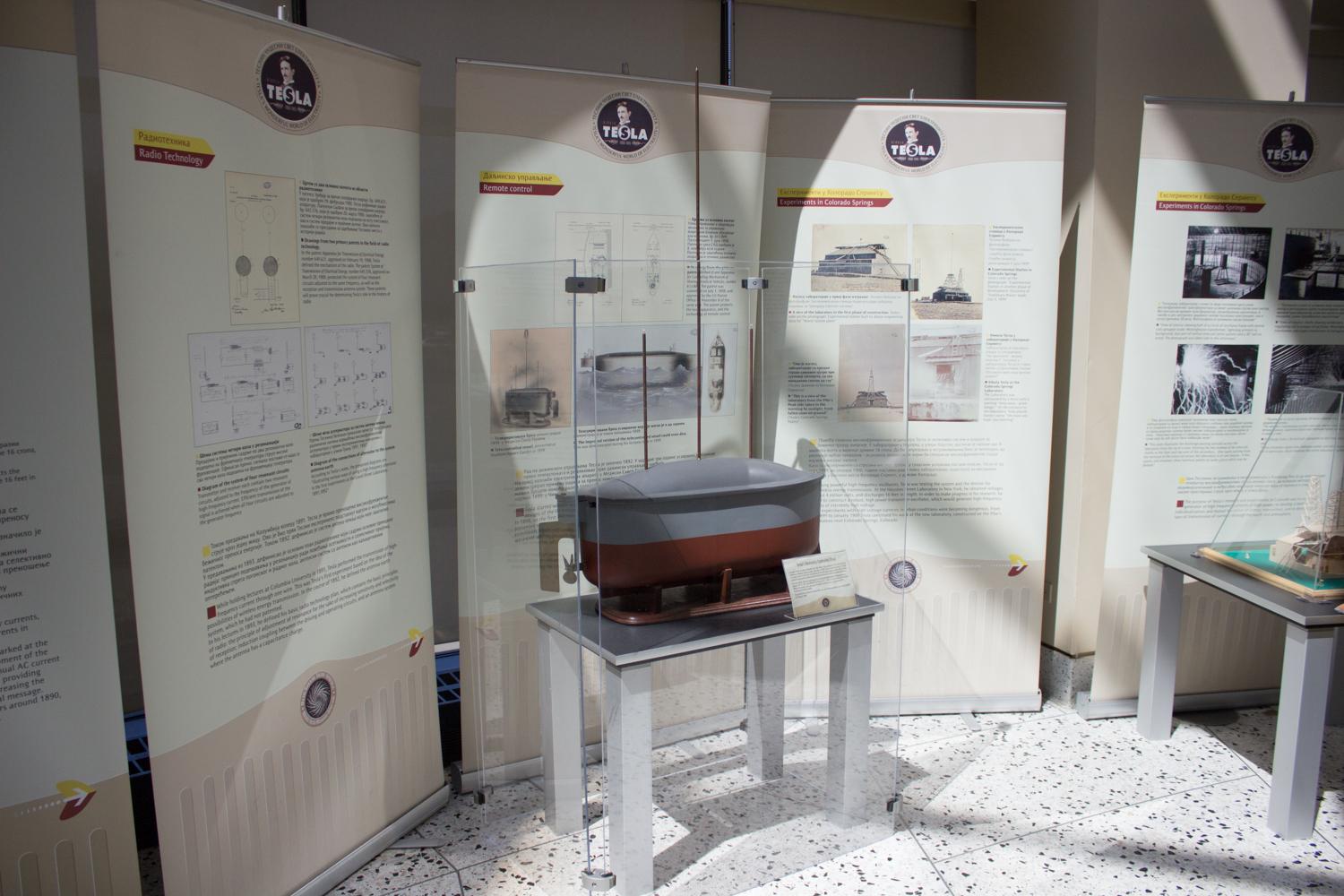 Originally posted by geobro
history has tried to blank this man out ...

If fact, I will go so far as to the say *number one* thing that he is known for here on ATS, is the continued assertion that he has been "covered up". It is by far the most predictable thing that an ATS user could ever say about him.

Originally posted by geobro
i have spoken to people of all ages and have asked them the name nicola tesla only to see a blank look in their faces .

I had never heard of Tesla's name until I was well out of high school, yet I knew everything Edison ever 'invented'.

Just shows that you'll be shunned for being a revolutionary free thinker, and rewarded for being a scum of the earth greedy capitalist.

posted on Jul, 18 2013 @ 03:03 AM
link
He's hardly been suppressed or kept a secret and everyone in the electrical engineering field knows of him and his inventions. The SI (metric) unit of magnetic flux density is named after him.

Perhaps that's the reason for his claimed anonymity in the US, that you haven't yet graduated to the international metric standard units of measurement.
edit on 18/7/2013 by Pilgrum because: (no reason given)

posted on Jul, 18 2013 @ 03:05 AM
link
Yeah I only found about tesla through my own research when I first dug deep down in the fringe.
I do my best and at least try and spread the word...people are too engrained with current media and MS sciences to even bat an eye to him, the fools......

posted on Jul, 18 2013 @ 11:25 AM
link
By and large, all they need to do to 'suppress' Tesla, is not teach about him in schools. By omitting him from the history books they are actively suppressing him. Sure, anyone can pick up a book or go to some website to learn about him, but the majority of people do all of their learning in school and have almost no desire to learn when they leave.

TL;DR, - Keeping such a revolutionary & genius mind (maybe even comparable to Einstein for his time) out of schools & not proactively teaching about him (teaching about Edison instead) is the equivalent to the government going to libraries and burning books about him.

Originally posted by liquidsmoke206
I concur. Don't ever remember him being mentioned even once in school. Maybe I was sick that day???

If you pay attention in school.

Dear god you guys are so predictable.

Pay attention in school or take advanced science courses, you all would have known who Tesla is. The Tesla parade has to be one of the most embarrassing one for all the reasons Alfa pointed out.

Nearly every Tesla thread I have to point out that Faraday and Hypolii pixi invented AC current and Tesla merely added to what they did in the past. I have to point out science and engineering is cumulative. It isn't done by one man but added on to by many.

The things Tesla invented was during a time when many invented and disseminated new views and everyone was adding on to what others have done.

In some fields and with some things, Tesla was the foremost inventor, but not everything.

An article writer here gets it.

So many misconceptions on the internet. Like him invented radar. Yes he pitched it, but pitched it for underwater use.

That wouldn't have worked though, they tried sonar instead.
edit on 18-7-2013 by boncho because: (no reason given)


Tesla was kind of like the Steve Jobs of his time. Yes he made some pretty cool stuff, but many things were just little tweaks and improvements on stuff other people invented.

Jobs created the iPhone, he didn't crete the cellphone.

But Im sure you are going to tell me that was Tesla who did that.
edit on 18-7-2013 by boncho because: (no reason given)


Did Al Gor invent the internet?No, Tesla did

Originally posted by Shark_Feeder
This thread is screaming for something to add to this discussion....what could it be?


This video is awesome.

But it doesn't actually exist though, because the massive cover up of Tesla took it down automatically. Oh wait...

posted on Jul, 18 2013 @ 01:29 PM
link
I had a friend who was obsessed... No, seriously... Stating obsessed is being light about Tesla... Every fetching day... Tesla this.... Nathan, Tesla.... (insert Tesla info) To the point I threw a book across the room at him... Not because he was so adament about learning about Tesla, not even that I already knew about the man... His obsession was a nusance and by the 1 month mark for hearing about Tesla for 30 damn days.... I just couldn't take it anymore... I snapped...

Tesla, what a great mind! So under rated and not given the proper credit he so deserves. That's how most brilliant minds end up though right??? Develop some ground shattering science, theory, whatever have you and be called a quack all through life... Until you die and everyone realizes... "Holy shnikey, he was right!"

The man should have his own museum... I'd go... Just not with my friend.

posted on Jul, 18 2013 @ 03:39 PM
link
The boat demo in New York was actually the first appearance of radio and
radio control. Did the people witnessing actually comprehend what was going
on or think Tesla was a magician or spiritualist or demon control. Yeah just
as foolish as the talkers about the Tesla airship that fly every day and we
see as UFOs.

About the boat, it was powered by the radio waves stored with on board
batteries according to Bill Lyne a Tesla researcher and author.

Originally posted by sulaw
The man should have his own museum... I'd go...

But there _is_ a Tesla Museum.

Or, no, wait, that cant be right, because of the massive coverup it would never be allowed, so obviously its a fake.

Originally posted by liquidsmoke206
I concur. Don't ever remember him being mentioned even once in school. Maybe I was sick that day???

One day in high school physics there was a Tesla coil demo.
Not the one that sparks being charged from a primary disruptive coil.
Some where in Tesla's writings he says the winding ratio is of no consequence
as with transformer action.

The coil was a stand alone cone coil the teacher charged with a small charge.
The coil went into oscillation and I think pushed away pith balls.
He had the class hold hands around the room while one student touched the
coil holding a small non lethal or painful spark. Everyone felt some tingling.

The weekend before that class I picked up a UFO book.
Ever since the coil demo I figured Tesla made the UFOs and now flat out
convinced.


Originally posted by sulaw
The man should have his own museum... I'd go...

But there _is_ a Tesla Museum.

Or, no, wait, that cant be right, because of the massive coverup it would never be allowed, so obviously its a fake.

Nikola Tesla Museum is located in the central area of Belgrade,


even farther away from us.

However Los Alamos has the good stuff we didn't send to Belgrade.
We can't touch that material either.


That video was awesome....and not far from the truth. Edison was businessman, Tesla, not so much. Edison wasn't even a fair businessman so Tesla had no chance.

posted on Jul, 18 2013 @ 05:36 PM
link
Tesla is a name I grew up interested in. I cannot remember where I first heard the name, but I have watched quite a number of documentaries about the fellow, and read a fair bit of his life story in bits and pieces over the years. I think the main issue with the whole Tesla vs Eddison thing, is the sheer amount of crap that Eddison just straight up STOLE from Tesla, and the unfortunate end result of Teslas fustrations.

If Tesla had been given his head, he could have quite literally changed the world, of that I have no doubt.


Ah, after all these years finally!!! Your origins are revealed!! I'm not the first ATS user to encounter and question your unusual and ridiculous obsession with Tesla, nor will I be the last. I'm willing to bet you've mentioned the name "Tesla" in 98% of the posts you've made no matter the forum. You're notorious for it!

It all boils down to a high school demonstration and a couple UFO books?

you must have had a very sheltered childhood.

One could write a whole thread entitled "TeslaandLyne finally reveals his origins!" and I bet it would hit the headlines of the ATS homepage. This is some red hot info right here!