Was Michael Hastings trying to get to a Foreign Consulate?

posted on Jul, 10 2013 @ 08:35 PM
link
It is impossible to know for certain at this point what lead up to Michael Hastings fiery crash. What we do know is He was traveling at a high rate of speed through a 35 mph semi-residential area.

The last known sighting of Hastings was at the intersection of North Highland Ave and Santa Monica Blvd. as he speed through a red light. Minutes later His Mercedes-Benz C250 left the road in a fatal accident.

Where was headed at 4:30 in the morning? Why was He driving so fast? We may may never truly know the answers but may I suggest this?

Was Michael Hastings trying to get to a Foreign Consulate and died while trying?

3. Michael Hastings contacted WikiLeaks lawyer Jennifer Robinson just a few hours before he died, saying that the FBI was investigating him.

1. A mile and a half further to the South on North Highland Ave. is the intersection of Wilshire Blvd.

2. There are 6 Foreign Consulates on Wilshire Blvd. Three of which are Latin American.

a. Consulate General of Bolivia

b. Consulate General of Bangladesh


3. From the Crash site the furthest Consulate is right at 3 1/2 miles. 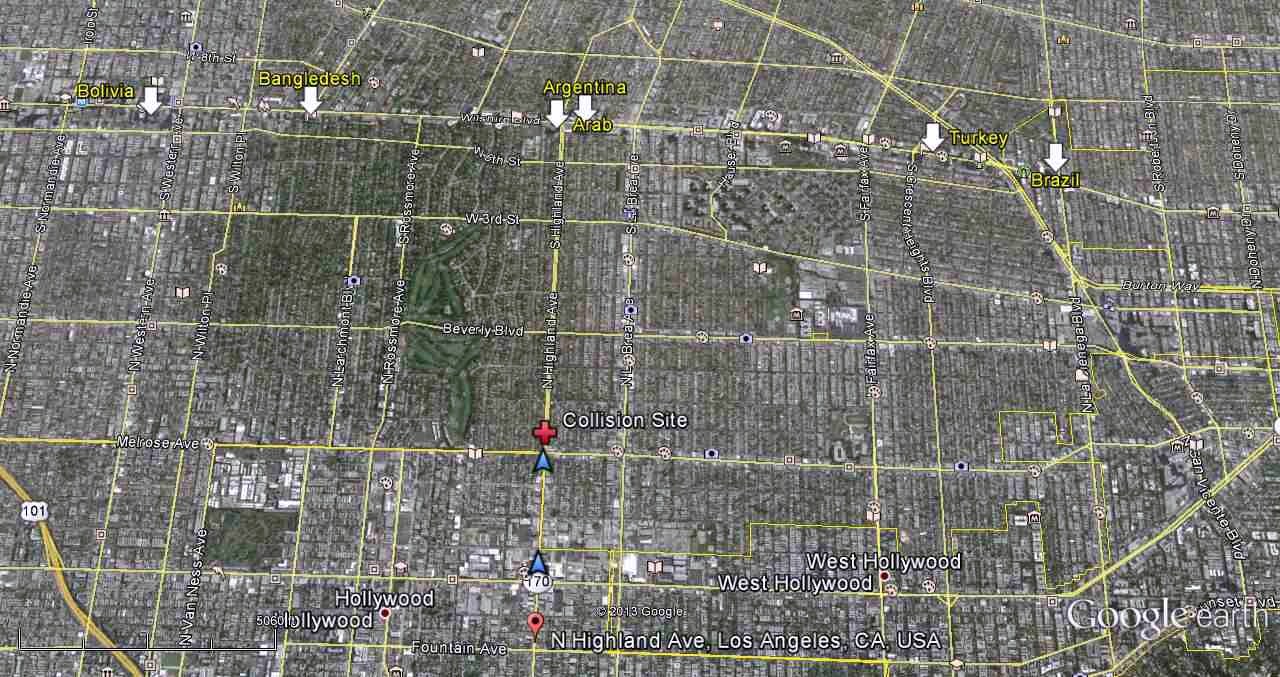 Is it possible Michael Hasting was trying to make it to a Foreign Consulate for an unknown reason?

After contacting WikiLeaks lawyer Jennifer Robinson was He seeking to "Go off the radar" concerning the FBI probe and the story he was working on?

Was it His work on his book about John Brennan (John Owen Brennan), the Director of the Central Intelligence Agency and former chief counterterrorism advisor to U.S. President Barack Obama. ( Contributed by WanDash...Thank you! )

We may never truly know the all the answers, but there are many great minds here on ATS.

ETA:
Contribution of Consulates in Los Angeles on Wilshire Blvd. by JBA2848 ....there's a bunch...Thank you! List of diplomatic missions in Los Angeles


That is one I hadn't though of. His wife announced either yesterday or today that he was Definitely Not working on a story about Jill Kelley.

Are those consulates in operation during those hours?

If that was his plan, which I am not certain it was, what might be the reason?


Very interesting question and well-laid-out. If true, someone alive probably has that information. Might be worth reaching out....


I don't know what the Consulate hours of operation are. I would suspect that they are guarded 24/7. It may definitely be worth a look and see if I can turn any info up on that. But, if it were by special arrangement or necessity I am sure someone would be there.

As to why He would be on his way to the a Foreign Consulate there could be many possible speculations. One thing is for certain though...He was trying to get somewhere in really big hurry.

Thank you for the update on the Jill Kelley situation. I was unaware of this.
edit on 10-7-2013 by miner49r because: (no reason given)


I know that he was Hooked Up with allot of military people in a big way.

Do you suspect that he might have had the idea to Go Off the Radar by means of a consulate?

Reaching here.... Julian Assange suggested to Snowden to seek asylum in Latin America. I do find it coincidental that there are 3 Latin American Consulates within the three miles (+/-).

It begs the question is there a possible FBI/NSA tie to what Hastings was working?
edit on 10-7-2013 by miner49r because: (no reason given)


But does it make sense to go tearing a$$ through town when you might draw attention to yourself?

If he was going to seek asylum, then why the big hurry? And why asylum?

Reporting isn't illegal, but from what was said about how he was gathering information supposedly was.

If I were going to lay low a consulate would be the last place I would be going.


Once inside a foreign consulate one is also on foreign soil and immediately untouchable.

IF.. He was tearing a$$ to get inside one of the consulates there must of been a reason of dire need need or reason. We don't know what transpired in the hours or the moments before the accident...but it must have been something of monumental significance for his actions in the end.

Originally posted by miner49r
...Where was headed at 4:30 in the morning? Why was He driving so fast? We may may never truly know the answers but may I suggest this?
...Was Michael Hastings trying to get to a Foreign Consulate and died while trying?
...The Facts:
...1. Michael Hastings researching Jill Kelley case before death
...2. Email from Michael Hastings before crash mentions FBI Probe
...3. Michael Hastings contacted WikiLeaks lawyer Jennifer Robinson just a few hours before he died, saying that the FBI was investigating him.
...4. Michael Hastings crashed on the 400 block of North Highland Ave. heading South.
...

Just to add to the list...
In a post by GrantedBail (here - www.abovetopsecret.com...) is a link to a CNN interview with Michael Hastings and his wife (Elise Jordan) that had not previously been aired. (found here - www.mediaite.com... )
I have not watched the video, but, GrantedBail stated that Elise said she was going to complete the last thing he was working on...which was a book on John Brennan (John Owen Brennan), the Director of the Central Intelligence Agency and former chief counterterrorism advisor to U.S. President Barack Obama.


I do not know where he lived but, a reporter doing a story about him said that he was coming from the direction of the night club district.


Excellent question ...Protecting Her from who though is another question.

If my wife was in danger the first thing I would do is call the sheriff... in this case LAPD. Would it make sense to tear through town, blow through red lights while trying to protect your wife without calling law enforcement?

It would and could make sense in a speculative way that on of them was in danger. It would seem that Mrs. Jordan-Hastings is doing as well as can be expected under the circumstances.

I would say that up the stakes in a big way. That is playing with the big dogs.


I have issue with that interview Wan. The reporter said that it was the first time it was being aired. ( July 7th)

I read an article that was almost word for word to that about 2 weeks ago or so.

I will try to find that article.

Originally posted by JBA2848
reply to post by miner49r

It looks like just about everyone is on Wilshire blvd. I was looking in G-earth and found those six that popped up. It looks like Wilshire Blvd. is saturated with consulates


I initially thought, that it may be possible that she was in danger, through text, call, e-mail... she had alerted him. Then he preceded to speed that fast-over 100 mph?, very endangering thing to do, then go out of control on the way to save her?

Considering what we know of the last few blocks of his trip, he was either “out of his mind drunk/stoned”, “intent on killing himself (and anyone that happened to get in the way)”, “terrified beyond reasonability”…or…“not in control of the vehicle”.

If he was attempting to get to a foreign consulate or some other “hideaway” – his mindset must still have included “I don’t care if I kill myself and anyone-else…trying to get there”.
If you’re driving that fast in attempt to “save your life”, you may accelerate as much as possible between traffic lights…but you’re going to slow down and at least give a quick glance both ways…when going through one.
If you’re driving that fast…to get somewhere (with an emphasis on “for safety or escape”), you will not continue accelerating in a business-turning-residential district…with traffic all over the place. (True – the traffic was not as it would be in another hour or two – but there was traffic on almost every street the LoudLabs camera went on, as well as at intersections along the route he took down North Highlands’.)

I am convinced he was travelling between 60 and 70 mph when he passed through the red light at Santa Monica Blvd. If the witnesses’ testimony is anywhere near accurate…and he was travelling close to 100 mph by the time he reached Melrose Place…he was in big trouble, as there is a crosswalk that forms a “dip” just before Melrose’, and one on the other side of Melrose’…and Melrose’ itself, rises to a “hump”…so – he probably did not touch the second crosswalk before bottoming-out, past it.
These factors (speed, dip, hump) do lend credence to the possibility that the car went “further” out of control thereafter.

So – IF he had control of the accelerator, brakes and steering…and was trying to get to a “safehouse”, he was DESPERATE to the EXTREME.
There are a couple of minutes cut from the LoudLabs video immediately after he passes through the red light at Santa Monica – We don’t know that someone wasn’t following-along-behind (at a little distance).
But – without such an in-the-mirror inspiration – If his actions (that we KNOW of) were his own, I am baffled at his dis-concern for his own safety and the safety of others he might/would cross paths with.

(And - I do not believe that to have been the case... But - in effort to work-out possible explanations - those are my thoughts, at the moment. Thanks for listening!)

...I have issue with that interview Wan. The reporter said that it was the first time it was being aired. ( July 7th)
...I read an article that was almost word for word to that about 2 weeks ago or so.
...I will try to find that article.


Good luck. I have read reports that were nearly word for word (or - had almost all of the same content) to on-air interviews, as well. Guess they're gonna make a buck in any and every way they can...when it's available.


I agree in that if one is intent upon getting somewhere .... they would at least attempt to get there in one piece and not take anybody else out in the process.

Adding the John Brennan factor really raises the stakes. Could the OB administration take another scandalous leak and hit? We don't know He may have been chased earlier but with His extreme speeds they decided to break off ...and at best He would finish the job for them.

I still remain open to the idea that His vehicle was may have been tampered with or even being controlled remotely. If it was tampered with in the front section.... well....it may be difficult to prove at this point.

We will have to wait for the official release of information.