Is this true? Internet price gouging based on cookies

"Having your data passed around can also lead you to be charged more for an item: if your browsing history shows you visit high-end sites, some sites will increase prices. (That's why plane fares can drop if you delete the "cookie" files in your browser.)"

Is this true? Are we being price gouged depending the sites we visit? So if I visit Armani's site, then next visit Levis Jeans - is Levis Jeans going to increase their prices because I visited a more expensive clothing site. Can anyone else corroborate this finding?

If true, I'm deleting all my cookies before I make another purchase online. 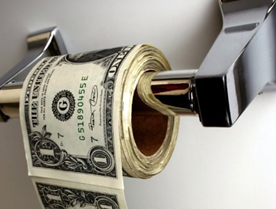 posted on Jul, 10 2013 @ 01:40 PM
link
If it is true, I wonder if the opposite would work? Visit all the dollar store's websites before making a purchase?

I don't know, but it seems like a good warning at least, to delete all your cookies before shopping online now.

Some of it is not even cookie based. Here's a WSJ story about how Orbitz was steering Mac users to pricier hotels. You can still get around that sort of thing but it requires a little more technical know how, a little more effort to get your foot out of the trap.

And the real trick of course would not be to prevent it, but to game the system so that you always get the best deals, eh?

With cookies, you can keep track of where that user goes but only if the other sites are using the exact same cookie. Instead they might use something like Google Analysts, a web traffic software or one of the ad placed boxes to track users.

They can tell if you come from an Armani site but they can't tell if you bought something or not.


So this is blatant price gouging. Legal? How?!
Our thieving gov't wants sales taxes but won't bat an eye at this.
Wonder if those idiots even know it takes place.
Even worse....allow it to happen.


Welcome to the new world.

posted on Jul, 10 2013 @ 07:45 PM
link
Cookies are only read and written by a specific domain. The domain using cookies to affect price would have to have a link to their site on the site being monitored for pricing decision. .Site A cannot read site B cookies.

posted on Jul, 10 2013 @ 07:50 PM
link
I would think it is quite possible. I have noticed a similar issue with Hotwire.com regarding rental cars. I was living up in the Seattle area and had my zip code registered with them as 98122. I regularly received teaser emails for auto rentals in my local area with rates from as low as 8.99 go 10.99 a day. Upon clicking the "see more deals" link or whatever they called it, the places I was interested in getting a car turned out to be $25 a day and up.
My wife and I repeatedly travel to a few of the same places a couple of time a year and we have now set our profiles to the zip that we are heading to and wait for the emails to come in with the low rates. I can't count how many times I have rented a car in Boston, San Francisco or Pittsburgh for less than $10 a day.

I hope this helps some of you out there.


Not legally they can't - I've seen tunneling cookies in action, they're illegal (only in Europe I believe), but do exist.


Agree. They can't tell if you bought anything, at least not yet, but can gather your page views down to the buy page. Whatever program is scoring the ranking system on pricing must be some hot shot #.


That's good advice all around. Thanks for sharing!

posted on Jul, 10 2013 @ 09:31 PM
link
I think that in my web design class they said that you could see what sites a user's visited (and their computer type) through _javascript?

posted on Jul, 11 2013 @ 09:19 AM
link
I've heard that browsing for hotels online then shopping for an airline ticket will put the price up for the airline ticket.


Yes, it's true, but this is no different to a shop marketing their goods at a higher price when the majority of their advertising is aimed at customers who have a higher disposable income or live in a more expensive region.

I have not found a single example of an online merchant being able to change pricing off the cuff depending on who visits. I work in the online sales business, and this is not possible as far as I am aware.

Cookies and user data is used to improve the site and profitability. I can check the data for one of my sites and see where the majority of traffic and customers come from, and I can focus my efforts on tailoring my business to the majority who actually spend money.

This is not a conspiracy, it's commerce.

posted on Jul, 11 2013 @ 10:33 AM
link
Wonder what companies will do when people don't have to pay anything, after a few wise minded folks get together and sue said company for making money off recycled materials, or making money in general off something they didn't own.

Same can be said for a great number of things, land, oil, knowledge, so forth. Even the people who discovered these items and concepts are not the owners of these. They belong to everyone and therefor cannot be sold back to us if we already owned it.

Most of the value system we have put in place is a bogus means to line the pockets off others. We have been used for the passed 2 thousand and 13 years

Started around the time the churches did..... hmmmmmmm makes you think, did religion create the concept of financial slaves?

Come on people, does anyone else not see that having a soceity that uses a buying / selling model for it's way of life is how you create greed, corruption, and flaws in said model seeing how you will ALWAYS have the people who deserve something and do not get it, people who have a better idea but no means to create it, when you limit and regulate people so much for so long you will create stagnation.

Eventually to ever go further with your society you'll have to hand things out for free or just die off while you have the few with their piles of things, dying hugging them.
edit on 11-7-2013 by Tranceopticalinclined because: (no reason given)

posted on Jul, 12 2013 @ 07:25 PM
link
It occurred to me (at least once) that at least some of the paranoia about online cookies, tracking and commercial information gathering is very likely coming from anti-capitalist activists (trying to sabotage the capitalist system in even the smallest ways if they can).

Not saying this is the whole story but it makes sense. Socialist activists are unbelievably annoying but they aren't stupid.