3 Christian Boys Tortured and Murdered by Pakistani Police for Being in Love With Muslim Girls! 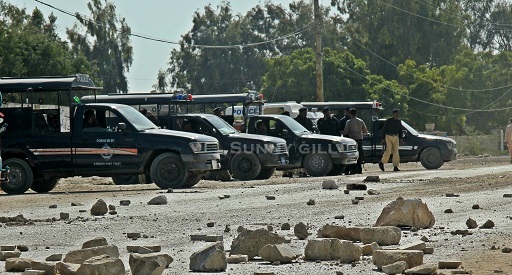 Now yesterday, Farhad Masih who is 16 Years old of Shibli town Gulshan Ravi Lahore was arrested by the Complaint (FIR) 579/13.PPC, 380/496 A. of Sakina Bibi, the mother of Rabia, also 16 Years old. The local Muslims looted and then attempted to burn Farhad’s house.

We observed in all of these cases, the police constables and investigation officers were torturing and abusing the Christian boys, as well as threatening them about their love relations with Muslim Girls.

Yesterday evening, once again local Muslims held a huge protest against Christians and tried to burn down their houses. Some Muslims have announced that Christian boys must be forced to convert to Islam. Due to great pressure from the S. P. Iqbal town Imtiaz Sarwar conditions were given to provide for the safety and lives of Farhad Masih and the members of his family. These conditions are as follows:

I thought I would bring this subject to the attention of ATS. Absolutely deplorable in my opinion! R.I.P

Acceptance for others beliefs, that's what the world needs. I'd be tempted to go into a rant about how backwards some people or a country.....or most religions can be......but you can't tar all with the same brush.

RIP to the lads who did what most lads do...like girls.

posted on Jul, 8 2013 @ 06:31 AM
link
Killing because of religious beliefs and not because bombs are being dropped on them, who would've guessed this could have happened?

My thoughts are with the boys, their families and all of the other people hurt by these maniacs.

posted on Jul, 8 2013 @ 08:36 AM
link
Pakistan gets its Islam from Saudi Arabia, so that explains the intolerance.

While in Syria; Muslims and Christians have co-existed and married without any problems for decades, up until now. Saudi Arabia is funding FSA al qaeda terrorists to implement a harsh intolerant shariah, and Obama is riding that donkey.

Then when the Islamists take over Syria, and make it into another Somalia by prosecuting minorities and beheading everyone who refuses to bow, Obama will come out and impose sanctions on the poor Syrians, he will probably start drone missions to bomb the terrorists that he put in power.

So why make Syria into another Somalia/Pakistan? why help Saudi Arabia spread intolerant Salafi islam? Obama you criminal coward!

posted on Jul, 8 2013 @ 08:51 AM
link
well what do you expect from an underdevelopment country with a fascist religion?

Gotta love the double standard too, I mean thats a centerpiece in religions.

posted on Jul, 8 2013 @ 09:06 AM
link
I expect direct international orders from UN and police force rescuing him, to take place ASAP.

I don't expect the news to be like sick form of entertainment but each and every problem SOLVED.

I do not believe in US oil interest, cabal interest wars for profit.

HOWEVER, I do believe in international laws, and UN, and world wide police effort.

This is simple, rescue the kid and make Pakistan so aware that if they ever slip up again then their government will be dismantled by a world wide police force, with a democracy that meets international law requirements put in.

That is how all problems in this world should be solved. Have known that all my life.
edit on 8-7-2013 by Unity_99 because: (no reason given)


All organised religions are nothing more than control constructs designed to keep in place TPTB!


This doesn`t suprise or shock me. I legally married an Arabic girl in the west, her family invited us to start a new life in their country (Arabian Gulf, and they are very wealthy). 2 weeks after we had arrived, to cut a long story short her grandfather declared the marriage illegal and as a Christian i had some how raped my wife because i was a Christian and she was a Muslim , therefore our marriage wasn`t recognised in the Sharia courts. they wanted to have her, their own grand daughter lashed and "turned"???? back into a virgin after which she would be moved to another part of the gulf and live in solitude for been a prostitute and whore. If i didn`t leave their country and leave her to this fate i would be beheaded. lovely family

Luckily we stuck to our guns and after several months in hiding i eventually had to change to Islam and we was remarried in the Sharia Courts and luckily we both were allowed to return to the UK. This by the way in a so called "westernised" country in the Gulf, so no, especially in the deepest darkest parts of Pakistan with all the turmoil in that region, this doesn`t suprise me one bit, it`s disgusting and the western world needs to start thinking seriously about what and which country it is willing to turn a blind eye to these disgusting acts done in the name of religion.


Sigh. Sometimes spiritual warfare bleeds over into the corporeal realm. Buuut, Pakistan is a pretty backwards nation. The whole "kill muslim girls for dating/marrying nonmuslims" is getting pretty old, rotten and rank. You're seeing the future of Europe and America if you folks persist in letting them stay. In the end it'll be your head that rolls on the floor. Weaker people will surrender and convert rather than die and join their ancestors in death.

Thou shalt not covet.

Thou shalt not murder.

Thou shalt not covet until one murders because of a love interest that was mutual.

Religion was a secondary motivation to jealousy.

Police have the authority to execute young men for a mutual love interest. Seems to me this is a family problem if anything.


Shame people can't just be allowed to practice their own religion freely.

posted on Jul, 13 2013 @ 08:05 PM
link
Are there any other sources except for christiansinpakistan and shariaunveiled.wordpress.com... ?!

Is the article written by a 3 year old ?

They think ‘ that only Islam allowed Muslim male about Love affairs and married with non Muslims which is noble cause’ But it’s sin and non bail able offense if any non Muslim love with Muslim girl. Please pray for Farhad Masih’s life. Who is under investigation of S P. Iqbal town Lahore? Yesterday evening once again local Muslims build huge protest against Christians and try to burn that street. Some Muslims announced the save way which is only to change their religion. Some of them jumped and play positive role to convert only Farhad Masih who has his own Rickshaw and own property. Due to huge pressure the S. P. Iqbal town Imtiaz Sarwar serenaded and made condition of life safety of Farhad Masih and his family. The conditions are under as. -