posted on Jul, 7 2013 @ 05:17 AM
link
My opinion is that Curiosity Rover, litterally, walk on the bed of an ancient dry martian lake and on a "carpet of bones", of what appear to be the old martian "flora and fauna of Mars".
During my last search, I've found, hidden in the martian panorama of Rocknest, and in my personal portfolio, some intriguing "anomalies".
mars.nasa.gov... 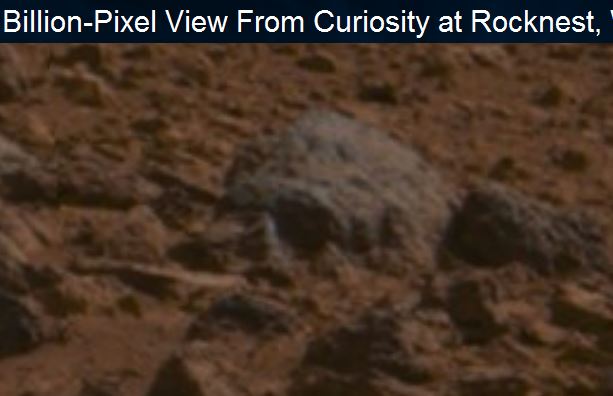 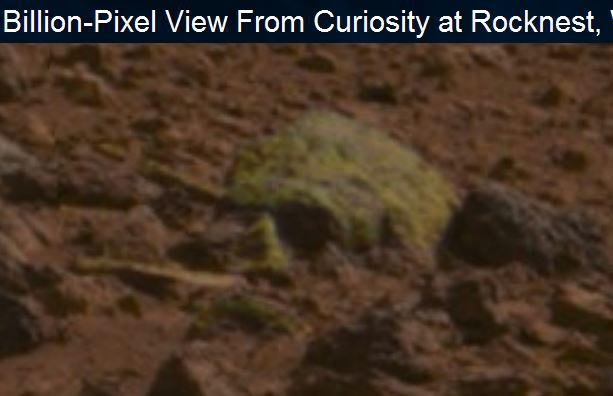 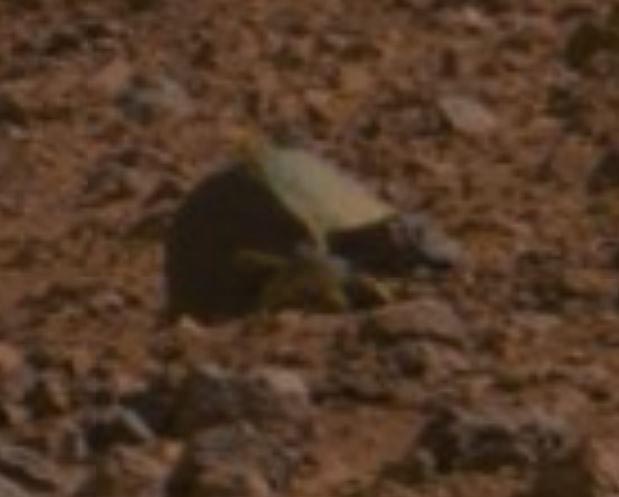 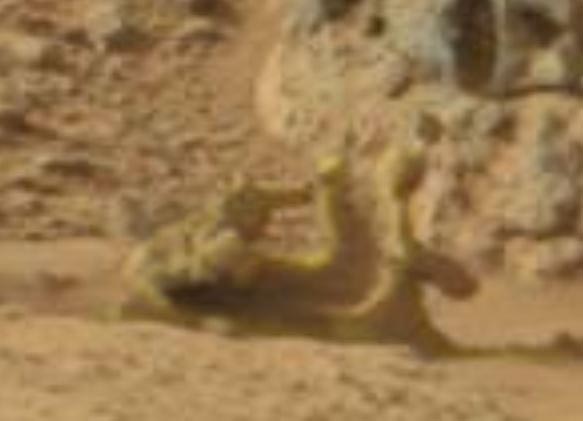 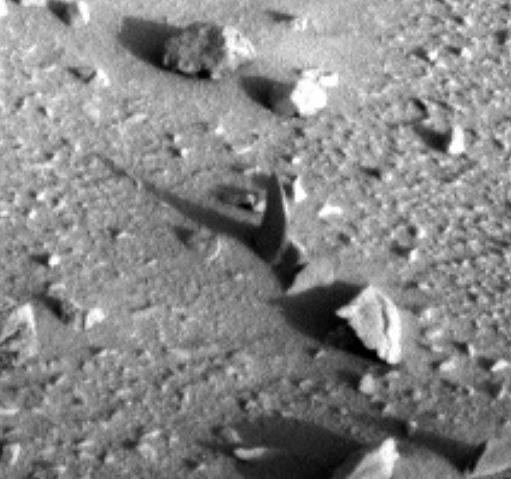 
Interesting, but I find it difficult to accept that a skull could be exposed to the weather and storms of Mars and still be so well preserved. How could it withstand erosion?

This is my first time saying this, but I think it's a rock. I just don't see how a presumably ancient skull could stand up to Martian dust storms and still look perfectly intact.

edit on 7-7-2013 by NarcolepticBuddha because: (no reason given)

posted on Jul, 7 2013 @ 06:14 AM
link
There's no comparison of size, so these could all be tiny, making them obviously rocks. There is also a lot of shadow play going on here, and it would not be too hard to make something look like something else from the right angle.

Sorry, but once again all I see are rocks, unless there is some more adequate proof.

It all comes down to probability. Is it more likely that these are just rocks, or is it more likely that NASA hasn't noticed them, or covers them up (while releasing images clearly displaying them?) Is it more plausible that finding something like this if it existed on Mars would be billions to one, or more plausible that they just happened to land, move around a little, and find evidence of Humanoid existence while ignoring it?

Nope, unless you can get up there and dig that out for me, I'm going with the most plausible and most likely scenario - it's a rock, possibly even "adjusted" with shadows, and presented without size comparison in order to make it more intriguing.

Mars is definitely a strange place and a place with hidden things, I can feel that much about it as intuition..

I don't even need NASA to admit anything, for me to know there is more to the place than meets the eye..

And bones can take a lot of sandblasting without being destroyed, depending on how dense the bone is and how hard the sand is.. Bones last for thousands of years, even millions of years... Dinosaur bones for example..

Originally posted by Arken
During my last search, I've found, hidden in the martian panorama of Rocknest, and in my personal portfolio, some intriguing "anomalies"

No, all you found were more rocks.

You are so desperate to believe they are anything but rocks.


Originally posted by Arken
During my last search, I've found, hidden in the martian panorama of Rocknest, and in my personal portfolio, some intriguing "anomalies"

No, all you found were more rocks.

You are so desperate to believe they are anything but rocks.


And you appear so desperate to believe they couldn't be anything but rocks.


"When a man block his mind, without any doubt, none evidence will change his mind." - Arken

posted on Jul, 7 2013 @ 08:12 AM
link
sorry but all i see are rocks, just like the hundred of other pointless posts claim rocks to be anything from finger nails to stealh bombers.

Just get real, all the photos you will see of mars are rocks and thats it.

Let me ask you a question, if NASA did stumble across a skull, a helmet, or anything besides rocks, do you honestly think they would make these pictures available???? And its not just like one photo has slipped by, but bro there are hundreds of posts just like this one and just like this one they all show rocks.

Its strange how people objects,things where they do not exsist, im guilty of this too, when i was younger i would see all kinds of sh*t in the clouds, doesnt mean there was a massive bunny in the sky, or a plane made out of cloud.

So for future posts just use a little grey matter and think before leaping to insane conclusions.

posted on Jul, 7 2013 @ 11:37 AM
link
i believe in an open mind on whether there has been life on Mars because it is a 'likely' planet for landing on simply because it is not covered in poisonous gas etc.

I keep an open mind, because I don't believe for one minute that the knowledge of building the pyramids thousands of years ago and other cyclopean structures that exist over the planet, that we still cannot today reproduce today, were clearly done by people with incredible knowledge that surpassed our technical knowledge we have today.

I also don't believe that we, with our brains and imagination lolled around on this planet for over 100,000 years.
We know that on this planet over periods of time, land mass changes and climate dramatically alter so its not unreasonable for us to not see, or to have had by ignorant people artifacts and sites removed and destroyed that may have given us a better idea of the past than we have.

If we managed to get to the moon in the 1960s against all the so called odds and with the limited computing and technological advantages we have even today, I don't think its that outlandish to consider that humans may have, in the past visited other planets they could land on. We know they clearly didn't use the oil based technology we use today so presumably they would have used some other form of energy to power their operations.

I am always curious as to why, with star wars weapons, one of the superpowers did not utilise the moon as a base rather than have odd stations circulating around the globe. Something doesn't make sense about our going to the moon and then turnikng our back on it. One reason could have been that they found things there that they could not explain. I don't believe with the amount of money wasting that goes on, the moon was considered too expensive when it came to military ambitions etc.

Close-ups would be essential here. We actually got some good ones by now, but for some reason the most interesting formations we saw in previous threads have not yet been revisited.

It would be telling, if Curiosity headed for Mount Sharp without re-examining some of those earlier features, but let's wait & see: don't count your chickens before they hatch ...
edit on 7-7-2013 by jeep3r because: text

posted on Jul, 7 2013 @ 08:07 PM
link
Having examined (seems like) thousands or MER photos and now Curiosity ones too, I do not think everything is 'a rock'. There is plenty of evidence out there for those who want to see it and believe it. If there was nothing but rock there, then there should be no problem giving us the same quality of image as NASA themselves get. But we dont, so what are we to think?

The poors saps who just accept the quality they are given and have to write 'scientific' papers using those images as science are not asking for the proper images and not getting them.

That 'tooth' has not been mentioned by any of the nay sayers on this thread and I dont think they will either - because it is strangely shaped and smoothly finished.

I have long maintained that there is something fishy going on with the wind on Mars and nothing anyone has said can convince me because they argue firstly that there are high winds which cause erosion (when I show them a pillar holding up a rock) and then they say that the wind and atmosphere is too weak to move 5mm spherical blueberries into piles. They want it both ways.

These are not rocks and there are civilisations on Mars and we will find out one day when scientists have the danglies to get up and demand proper images as NASA get.

Originally posted by qmantoo
then there should be no problem giving us the same quality of image as NASA themselves get. But we dont,

Your proof of that claim is what exactly?

Originally posted by Arken
reply to post by iterationzero


"When a man block his mind, without any doubt, none evidence will change his mind." - Arken


There's nothing to see! Look at it in 3-D. You REFUSE to follow a scientific approach. The first image - 2 different rocks. Wow.

The same thing every time.

Originally posted by geobro
good find arken i was looking at photos on nasa's site the other day of wood on mars . 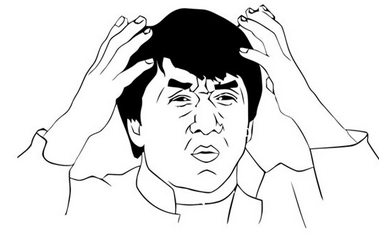 Any who. Good pictures posted OP. I don't know what they are...but I rather see them than not.

Check this out recently talked about today on "Ghost Theory", looks very weird.

This unusual structure has a very balanced shape and size to it. This structure also does not go under the ground, but instead is laying on the surface of Mars. Notice the evenness of the lines. The balance of the indents that go all the way down the sides. The back seems thinner a bit than the front…if it is the front. This structure shows lots of signs of being an a spaceship that has long since been abandoned on the moon. I bet NASA already knows about it and has been there to investigate.


Originally posted by geobro
good find arken i was looking at photos on nasa's site the other day of wood on mars .

i am not sure what jackie chan has to do with mars .

Originally posted by jeep3r
The "statuette" looks interesting, don't know what to make of it though ...

Close-ups would be essential here. We actually got some good ones by now, but for some reason the most interesting formations we saw in previous threads have not yet been revisited.

It would be telling, if Curiosity headed for Mount Sharp without re-examining some of those earlier features, but let's wait & see: don't count your chickens before they hatch ...
edit on 7-7-2013 by jeep3r because: text

It's my opinion that Curiosity has examined that area secretely. Right the "Spine" Area of this thread www.abovetopsecret.com... from february 27, till march 14.
Do you remember the strange black-out?
15 days to analize and examine secretely...
hush-hush