A train carrying crude oil derailed overnight in the heart of Lac-Mégantic in Quebec's Eastern Townships, sparking a major fire that has brought firefighters from the town and neighbouring municipalities to the area, and led to the evacuation of hundreds of people.

posted on Jul, 6 2013 @ 08:07 AM
link
I have been following the story for a while and this has the potential of being a major tragedy, as many are missing and not answering the call this morning. A series of six explosions occurred beginning at 1AM in the heart of downtown Lake Megantic where many businesses were destroyed, Most of these businesses had apartments above them. Four of 73 railcars have either exploded or burned. Lake Megantic is located a couple of hours southeast of Quebec City near the US border.

www.cbc.ca
(visit the link for the full news article)
edit on 6-7-2013 by aboutface because: (no reason given)

posted on Jul, 6 2013 @ 08:30 AM
link
A couple of bars full of patrons located fifty feet from the train, a Jean Coutu pharmacy, municipal library, hair salon, and a bank were caught in the first explosion as the long train was passing nearby. A witness speaking on RDI Direct, Canada's French network related how he and another friend had seen sparks coming from a fuel wagon during the derailment, and ran as far away as they could as the fire chased them down the street. They ran into the lake, arriving just as a fireball reached the shore. They made their way to safety in the middle of the lake as the explosions occurred.

Air and water quality are under close scrutiny. There has been some fuel spillage into the city sewer system and a large amount has spilled into the Chaudière River.

Between 150 and 200 people may be missing. Many worried parents are still looking for their children who are not answering their cell phones. One man is worried about his mother and mother-in-law who are still missing. The fuel-fed fires are still burning, so a search among the ruins will be delayed.

posted on Jul, 6 2013 @ 09:02 AM
link
That's all kinds of bad. what's even scarier is the silence on the board here, and the lack of any information in news channels.. this happened, what.. 6-7 hours ago and we still have no information on anything other that "boom"

Thank you OP, this is real news.. not zimmerman crap or "omg they spying on us" scripts.

BTW.. what's up with all that purple? cam malfunction or a EMT vehicle we cant see?.. makes it kinda spooky, if it wasn't scary enough already.


This is a petroleum fire, so my guess is that, plus the fumes are the cause of the purple colour. I'm no expert though.
edit on 6-7-2013 by aboutface because: (no reason given)

The Train with Two Red Engines.

The train had two red engines that were pulling a very long load. I watched it as it began to move faster. As it gained speed, I became concerned because it did not seem to be traveling safely.
...
When the train derailed it bounced towards the highway and continued to move along the street.
...
There were buildings burning. There was a fireball.


Does anyone know if there were two engines ? 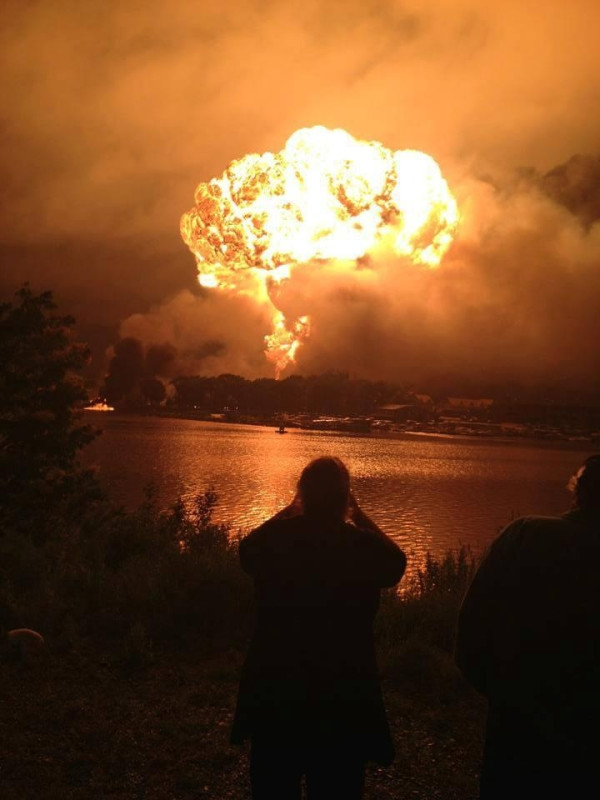 Wow, this is insane. I really hope those missing people turn out to be fine.
edit on 6-7-2013 by Dominar because: typo


I really hate playing into this scenario because it is sad enough as it is now stands.

However, there is a mystery attaching itself to the pictures coming out. One such photo on the network web site shows a train in Nantes QC taken 90 minutes before the huge Lake Magantic explosion. Nantes is located 12 kilometers from Lake Megantic a distance of 6 minutes away. The network said the witness took the photo at 23:30. Here it is 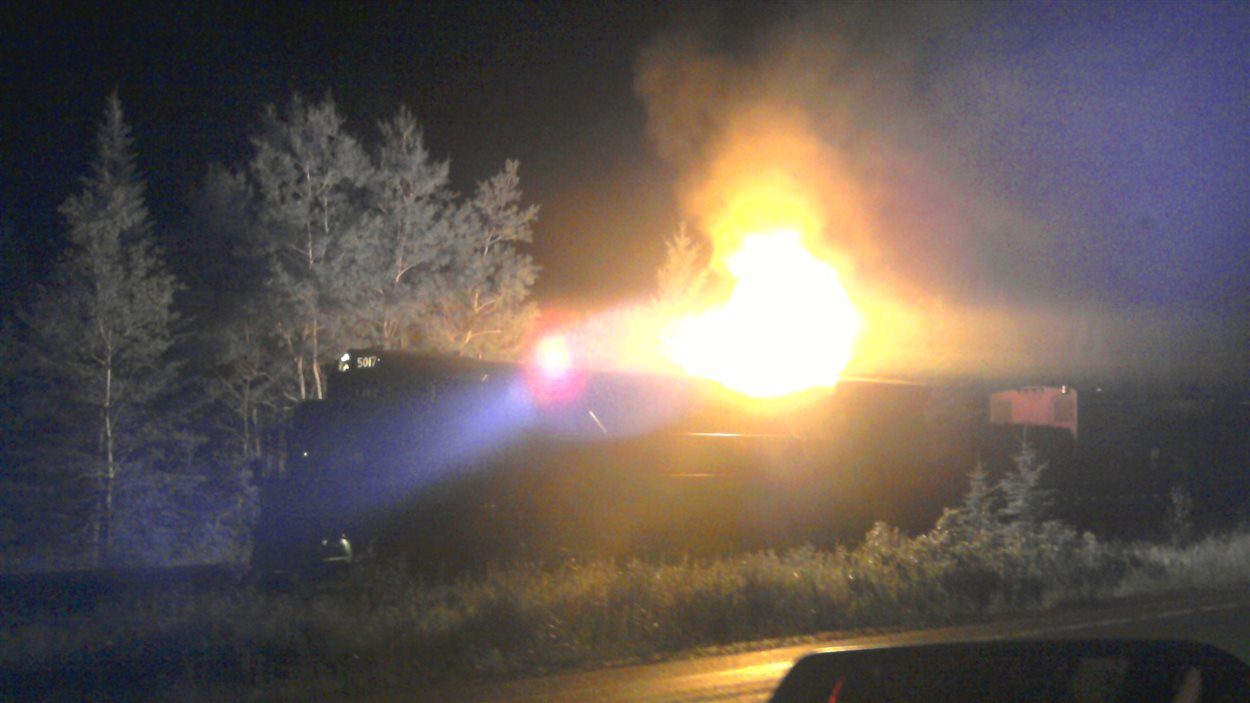 posted on Jul, 6 2013 @ 10:51 AM
link
That photo is of an engine experiencing an exhaust pipe fire. Incomplete combustion of the diesel fuel creates a build up of carbon in the exhaust pipe. When the engine experiences a high-revolution condition (usually when starting the train moving, or going from braking to power) the carbon catches on fire for a moment. It usually doesn't last long (five to ten seconds) and will reoccur frequently until the engine is given a "tune up" at a service facility. I have never heard of it causing a derailment or a fire in the train.


Thank you for your helpful input. It eases the mind somewhat. It does appear to be coming from the back of the engine / as opposed to fuel cars.

That photo is of an engine experiencing an exhaust pipe fire. Incomplete combustion of the diesel fuel creates a build up of carbon in the exhaust pipe. When the engine experiences a high-revolution condition (usually when starting the train moving, or going from braking to power) the carbon catches on fire for a moment. It usually doesn't last long (five to ten seconds) and will reoccur frequently until the engine is given a "tune up" at a service facility. I have never heard of it causing a derailment or a fire in the train.

Thank you for confirming that, I thought it looked suspicious at first and could of possibly been a part/cause of the accident.

This derailment is exactly my nightmare every time I climb on one of these trains. Some times I feel like kissing the ground when I get off at the end of the run. 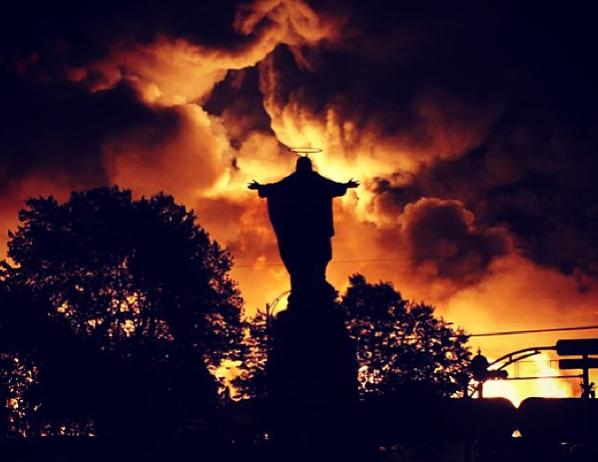 
The locals said that the train came into town at a faster clip than usual. The network said the rail company confirmed that the train was running on autopilot, that no one was running the train. According to the math, the train must have stopped somewhere between Nantes and Lac Mégantic, if it was indeed the same train. Hopefully an inquiry will show whether there was a similar fire when it rolled into town before derailing.

The press says that there are over 60 confirmed missing people.
edit on 6-7-2013 by aboutface because: (no reason given)

posted on Jul, 6 2013 @ 12:03 PM
link
An exhaust pipe fire would not cause an explosion. It would not reach far enough back in the train, and would not last long enough to cause damage to a car. Fires at derailments are caused either by sparks from derailing equipment, over-heated rail equipment (wheel bearing, etc), or electrical sparks from something hit by the derailing cars ( light posts, power poles etc).

There will be some other reason for the derailment an fire. Most likely it will be a combination of several failures that worked together. Excessive speed would be one possible issue, but the only "autopilot" currently in widespread use in North America will maintain an extremely slow speed for loading purposes. It can't even be activated at road speeds. If the news network is reporting this, then more than likely they are mis-interpreting something else that was said by the railroad.

There are many many things on and near a railroad that can break and cause a derailment. One of those things is the crew. No mention of them in the story.
edit on 7/6/2013 by Montana because: (no reason given)


I will admit I know next to nothing about train derailments, but looking at this video it appears the derailment happened in the middle.....unusual no?


No mention of any crew whatsoever, leading the viewing public to wonder if there was any.

The fire is still burning and the firefighters are busy securing the perimeter. There is a possibility of evacuating another town because of air toxicity.